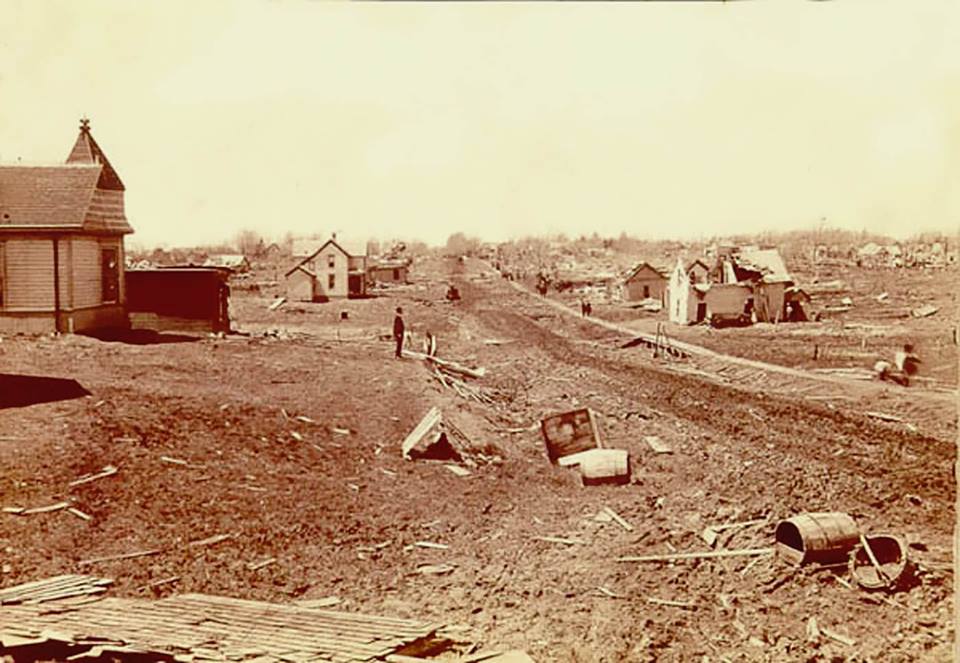 East Jefferson Street in Kirksville, looking west toward downtown, following the April 1899 tornado.
Many people today consider the area through Oklahoma as “Tornado Alley” due to the high number of storms that occur in this region.  But as Joplin, Missouri residents can attest, our own state has many devastating storms yearly.  The last couple of decades of the 19th century brought the development of a weather bureau of the U.S. military.  Temperatures and storms were recorded for future benefit.  One of the first major tornadoes to be recorded in Missouri was the Richmond, Missouri tornado of 1878. In 1880, a similarly devastating twister hit Marshfield, Missouri. 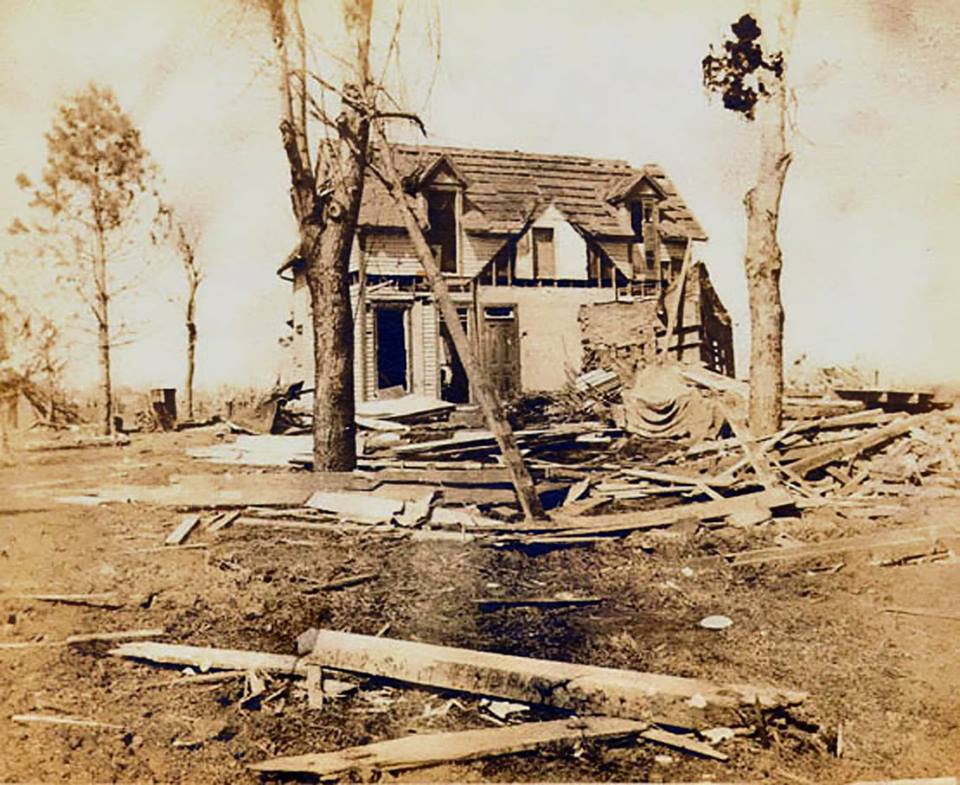 Thomas Brigham home, located on Normal Street near what we would refer to as the former Kentucky Fried Chicken.
As the residents of Kirksville sat down to their evening meal or clearing away the dinner dishes on the evening of April 27, 1899, a tornado made its path through Adair County and the county seat.  The tornado burrowed a trail of damage through the area, with a good deal of destruction to the central residential section of Kirksville.  More than 150 homes were destroyed and 1,000 people left homeless.  Adair County residents celebrated the opening of their new courthouse on the Kirksville square in March of 1899.  The path of the April 27th tornado had it bearing down on the new government building, much to the anxiety of the citizens.  Tornadoes are tricky and unpredictable things, as the Kirksville residents found out.  Estimates of the damage range from $25,000 to $250,000. One of the last events of damage caused by the cyclone was the complete turning around of the barn of Mary Wilburn.  The death and destruction of this storm was tremendous and no respecter of person or position.  Members of every walk of life were affected by loss of life or property.  John G. Kirk, the son of Jesse Kirk for who the town was named, was one of the victims of the tornado (1)  The home of Judge Andrew Ellison suffered extensive damage from the storm. . The Dubuque Daily Herald of Dubuque, Iowa (4/29/1899) claimed the death toll to be over 50 people and near 500 injured.  The actual death toll was 34 residents, many of them women and children.​ 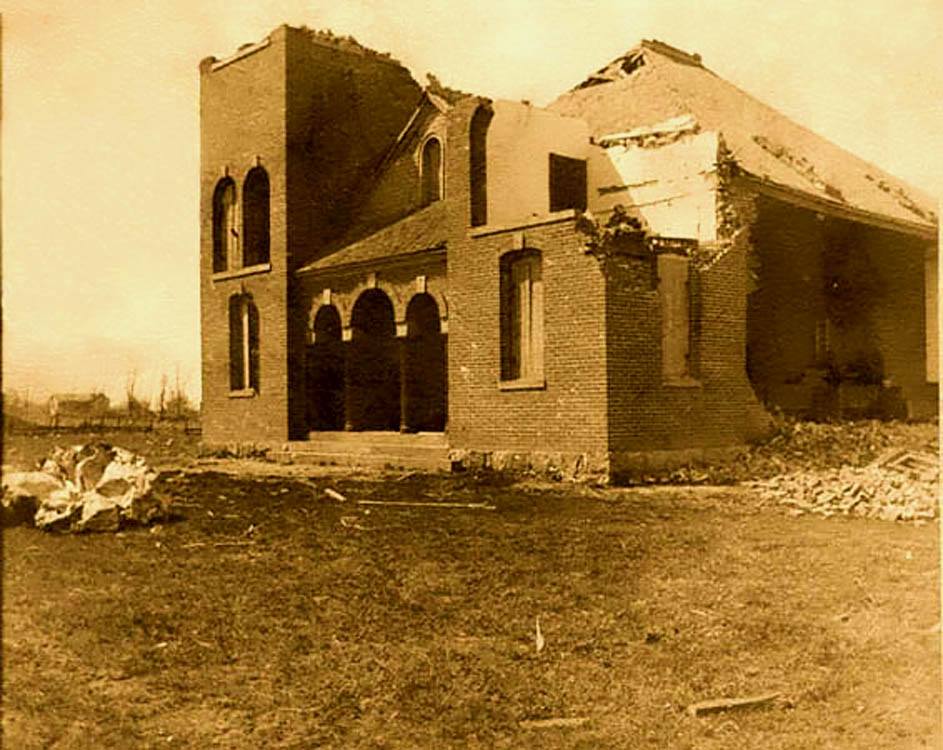 The Holy Cross Catholic Church located on East Missouri Street. The walls exploded outward from the force of the winds sucking out the air inside.
The tornadic activity had already caused considerable damage before it first touched down in Kirksville on East Patterson Street.  The Sullivan County community of Newtown was caught unaware by the storm about half an hour before Kirksville was hit.  Of the 700 residents of Newtown, 13 died due to the tornado and 28 were wounded (2).
​
The May 4, 1899 edition of the “Nodaway Democrat,” town newspaper to Maryville, Missouri suspects that the reason that so many of the victims were women and children was due to the fact that they were at home and in the preparations of the evening meal (2).  Many of their male counterparts had yet to arrive home from their workday, as can be accounted for by the amount of accounts of men, victim and survivor, being caught by the tornado in their wagons, on foot, or horseback.  This writer contemplates that the number of deaths may have been higher if the men had already made it home and sat down to their dinner only to be buried under the rubble with their wives and children. 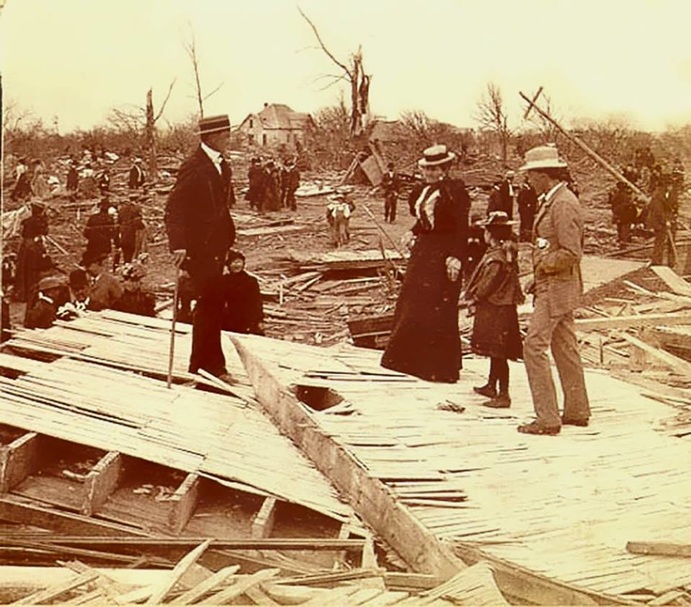 In both the Newtown and Kirksville encounters, a severe thunderstorm occurred after the tornado.  The heavy rains and lightning hindered rescue efforts.  Even with the rain, there were many fires blazing throughout the night in the rubble.  Some refer to the fires providing light through the night for the rescuers.

The city was fortunate that it was home to the osteopathic school, as many of the students helped treat the injured.  Many of the homes of these students were destroyed in the tornado.  The students were not the only ones willing to help their neighbors.  Local doctors, nurses, and the general citizen jumped in to search through the rubble and save those injured.  Trains brought in doctors, nurses, and other volunteers from Quincy, Moberly, Ottumwa, and other communities.  Financial donations and support would come in from all around the tri-state region and even as far away as New York. In 1899 it was the same as today, many of those in Kirksville for academic reasons haled from far states and lands.  Some of the victims of the tornado may have been osteopathic students as John R. Musick makes mention of doctors from New York and Vermont.  Musick speaks with sadness of how trains arriving in Kirksville days after the tornado contained relatives and friends looking to find out about their loved ones (3). 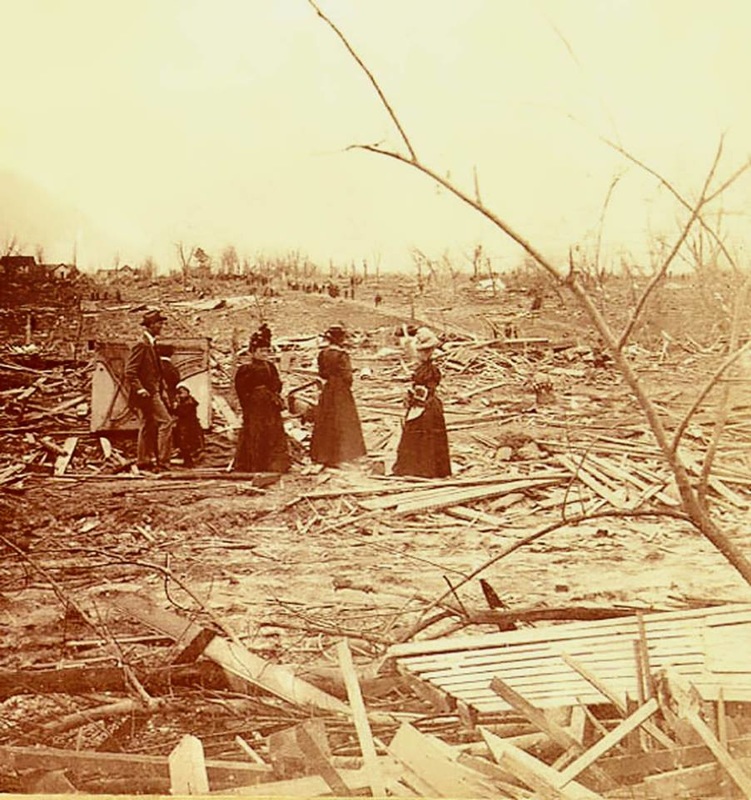 The swift swirling of many tornadoes has been known to suck the water completely out of ponds, creeks, and wells in their path.  This was also the case in this storm.  Some wells as deep as forty feet were drained by the tornado as were many artificial lakes. (3) One man, Edward Kellogg was swept up by the tornado and landed in the mud of a pond that had its water sucked out by the tornado. At least three survivors had stories of being swept up by the tornado and carried hundreds of feet.  These individuals spoke in particular of a fully harnessed white horse swirling around with them inside of the tornado.  Live babies were found in the arms of their dead mothers. Some victims were basically speared by boards and other debris. 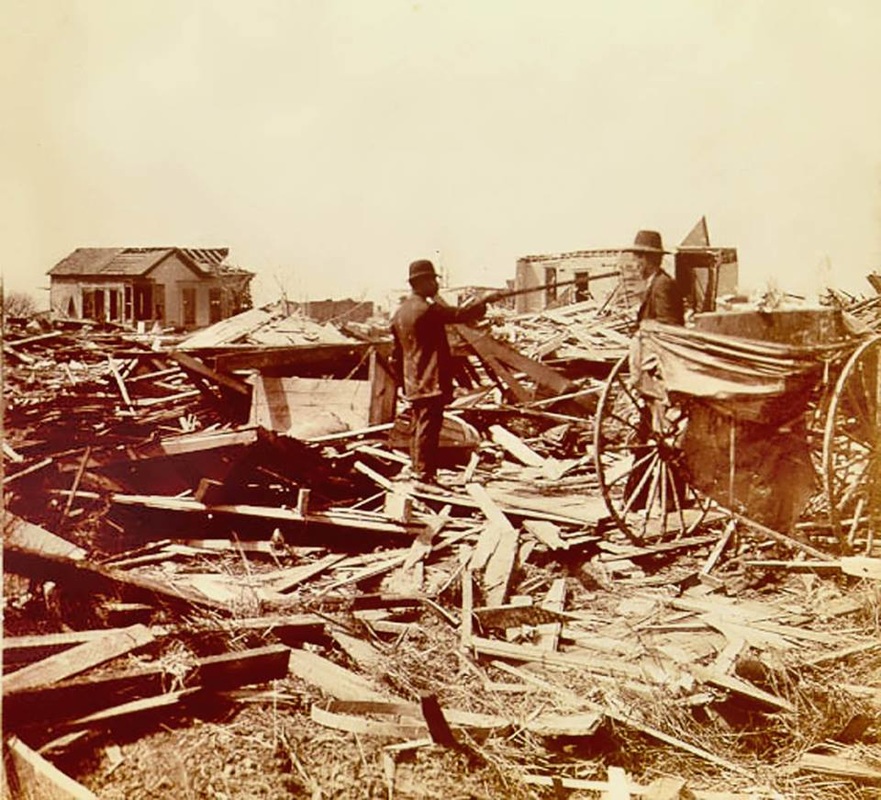 Blue Panchott (or Parschott) worked for the Wabash Railroad Company and was rushing to his home near the intersection of Baltimore and Pierce. Tragedy had already reared its ugly head toward the Panchott family.  Mrs. Panchott and her baby had both been killed in the tornado.  The head of Mrs. Panchott was severed by flying tin, one newspaper report says that her head lay twenty feet from her body (5).  Mr. Panchott was found holding each of their bodies, one in each arm, in a fit a crazed grief.  An elderly couple, Andrew and Rebecca Glaze, living at the corner of Harrison and Baltimore, wrapped their arms around each other when they say the storm coming and were killed when their home collapsed on top of them.  Mr. Glaze had $900 in his wallet and Mrs. Glaze had $2,000 sewn into her clothes.​ 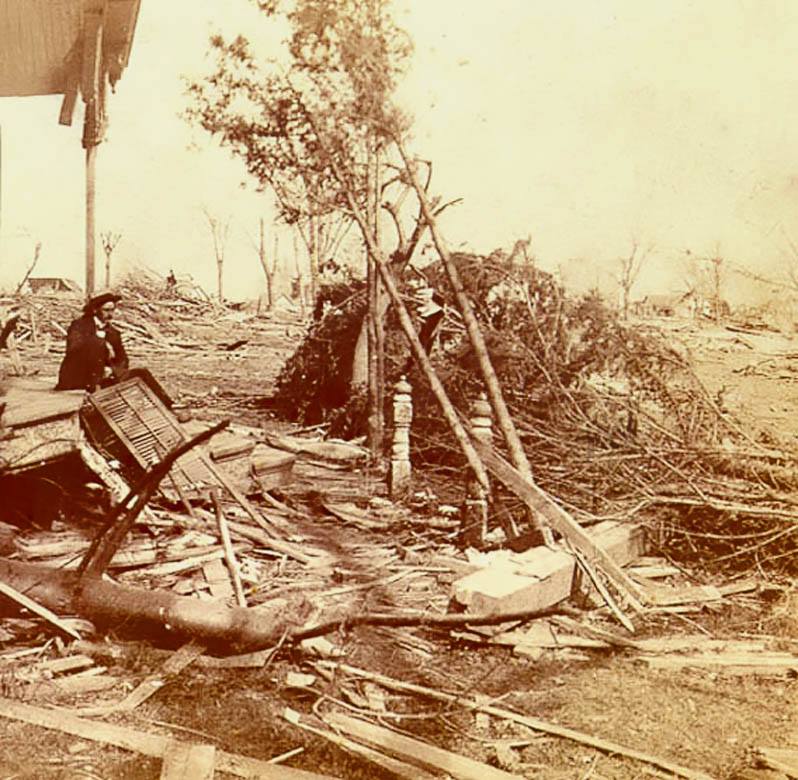 The emotion felt following such tragic loss has never changed through the course of time. That despair and sadness is evident in the man in the photo.
As I have already mentioned, tornadoes are unpredictable things.  People always scratch their heads in bewilderment as to why a tornado might spare their home yet level the one across the street.  One of the humorous things about the April 27, 1899 tornado was that a piano was hurled 1,000 feet through the roof of a house and found in playable condition.  The manufacturer, W.W. Kimble Co. of Chicago, had the instrument taken to their home office to be used as an example of excellent construction.  A poem was even written about a little girl living in the house wishing for a piano and on April 27 her prayers were answered with this piano landing at her home.(4) 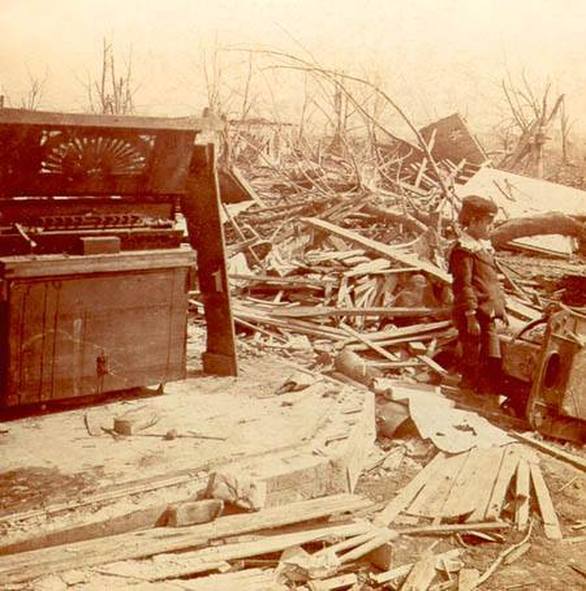 A local newspaper reporter discovered this piano located peacefully on the remains of this home.  He proceeded to belt out the tune of "Home Sweet Home" on the instrument. It would be used by its manufacturer as an example of excellent construction for years following.
Not matter if it’s 1899 or 2009, the devastation and emotion elicited from a tornado remain the same.  The photos give example of that. 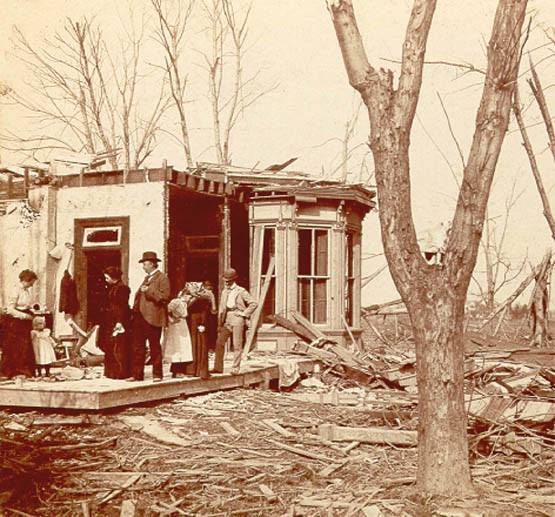 The home of Judge Andrew Ellison following the April 27, 1899 tornado in Kirksville. 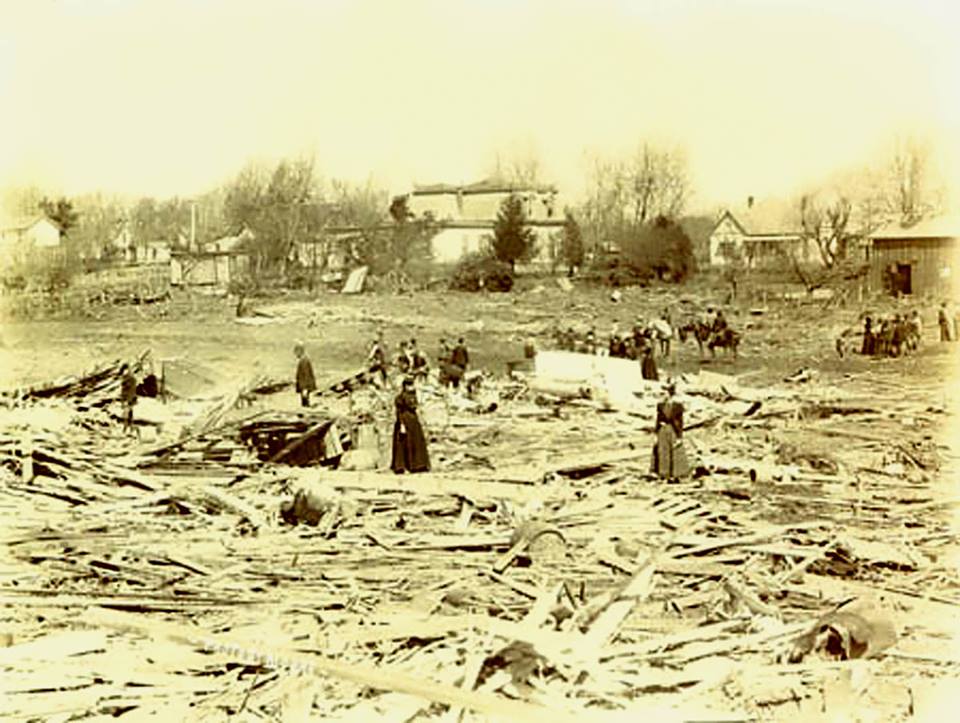 This scene is probably along either McPherson or Washington streets in Kirksville near Baltimore.  The large two-story in the center of the background was the Thomas Dockery home, now owned by Al Srnka, at the corner of Harrison and Lewis streets.  The house across Harrison facing the Dockery home is still standing, as is the house partially hidden by trees to the left of the large home.  This second house was the first house owned by this author.
(3) Musick, John R. In the Whirl of the Tornado. (August, 1899). The Century Magazine.
(4) Nodaway Democrat. Maryville, Missouri. May 4, 1899.
(5) Adair County Historical Society. Kirksville 1899 Cyclone April 27, 1899. (2010). www.adairchs.org/CYCLONE-1-2.pdf
(6) The Herald. Los Angeles, California. April 29, 1899. http://cdnc.ucr.edu/cgi-bin/cdnc?a=d&d=LAH18990429.2.29
https://docs.google.com/a/novinger.k12.mo.us/forms/d/1mZSJbnG9oPeMZMGDv312ZqXaivCXOCu7MOtBqbZ4PGg/viewform
Assessment
Powered by