Missouri History
The Pendergast Machine
The style of large city politics common in the late 19th century and early 20th century is uncommon to most Americans today.  There have been increased safeguards and changes placed on local politics over the years that have made personalities and politicians such as Boss William Tweed of Tammany Hall fame and New York’s “Five Corners” neighborhood boroughs long gone.  These political bosses were involved in everything happening locally, for the bad and the good.  Most things did not occur unless the “boss” gave the okay.  Every major city had some form of leadership, some sort of political boss.  Kansas City was no different. 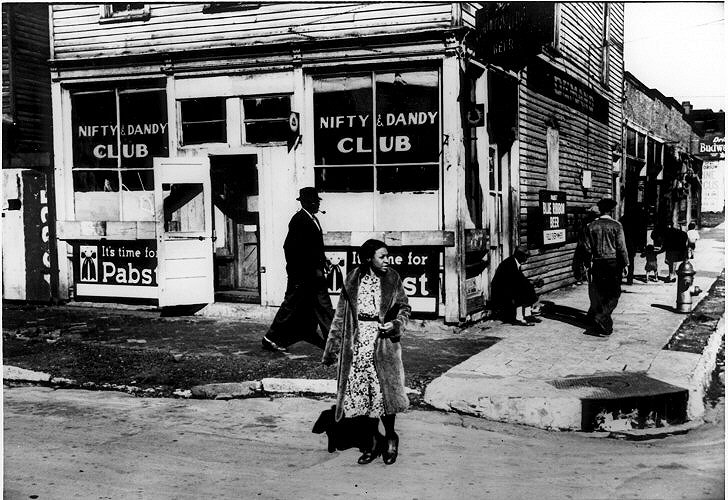 The advent of the leadership of Pendergast’s in Kansas City occurred about 1892.  Jim Pendergast owned a saloon in the West Bottoms of Kansas City.  The West Bottoms is an area along the Missouri River and was a poor neighborhood.  The working class, poor immigrants and African Americans lived in the West Bottoms and struggled to make an existence.  As was the case in many other communities, large and small, it was the taverns and saloons where most of the community’s business happened.  It was here that men would go after work to gather with their peers and catch up on those things of importance of the day.  These businesses served as a business and political clearinghouse, meeting house, and welfare house.  They were the days equal to cafes and social service agencies.  One could get a meal with their drink and perhaps assistance of food to take home to their families.  All of this cemented the support of the working class stiff to those that ran the business.
Jim Pendergast actually began his business through the winnings of a poker game.  That game of chance opened the door for the long-time Pendergast machine to fire up.  Tom Pendergast was still in his hometown of St. Joseph when he decided to move to Kansas City and help his big brother Jim in operating the saloon.
Jim’s popularity with the saloon helped him to have a strong influence in the local government of the time.  One author says that Jim had been instrumental in who were the mayor and all other key offices in Kansas City politics.  The 1900 election allowed Tom to become the Superintendent of Streets.  That job gave Tom the ability to hire 200 workers and buy material and equipment for the street-paving program, an activity that improved the lives of the citizens in the West Bottoms and more. 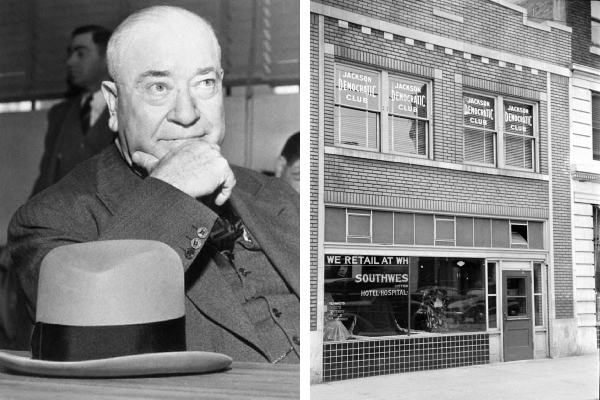 https://ganglandwire.com/wp-content/uploads/2015/11/jacksondemocratic.jpg
Tom took over the machine in 1911 with the death of Jim.  Jim had taught Tom everything he knew about politics, both the right and the wrong.  Tom would serve on the city council until 1916 when he stepped down to focus on the strengthening of the Jackson County Democratic Party.
Jim’s saloon was not the only drinking establishment in the Pendergast portfolio.  Many other drinking houses, gambling houses, houses of prostitution were owned by the Pendergast machine.  This was the era of the temperance and jazz and ragtime music, two polar opposites trying to compete.  Tom profited from the sale of alcohol, so naturally he was against temperance. 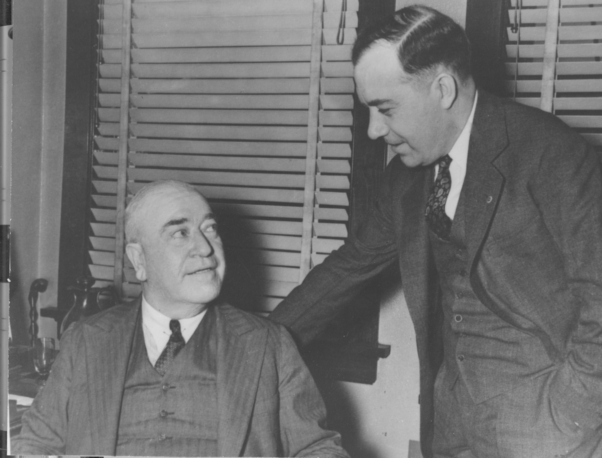 https://www.trumanlibrary.org/photographs/96-853.jpg
Tom helped the poor in his area by providing meals and jobs, holding annual Christmas parties for the children of the citizens, and providing coal for widows during the winter.  Many citizens of Tom’s ward or district would visit his office and explain of their plight, only to be handed the money or necessities and be sent on their way.  The middle class Kansas Citians benefited from Pendergast organizing social events , such as organized baseball and bowling leagues and dinners and the like. People began to look at Kansas City as “Tom’s Town.”  The people repaid his help by casting their votes for his candidates. This practice would go on until the fall of the Pendergast machine during the early days of World War Two.  By that time, Tom was being looked at for corrupt election practices and income tax evasion. 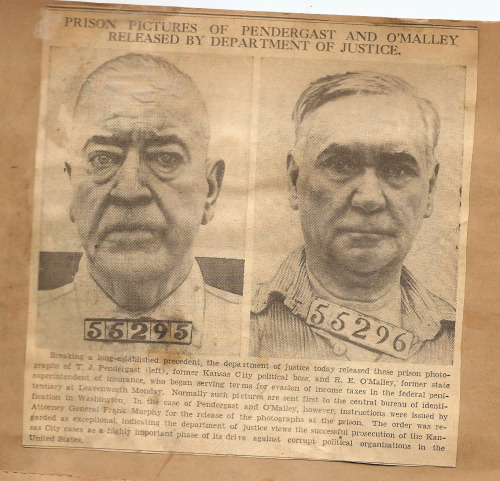 http://prettykansascity.com/blog/2016/aprimeronpendergast
​Tom Pendergast pleaded guilty to tax evasion in May 1939 and was sentenced to 15 months in Leavenworth federal penitentiary.  He would leave the prison and live out the rest of his life quietly at home until his death in 1945.  The funeral of Tom Pendergast would bring nationwide attention due to the fact that the Vice-President of the United States, Harry Truman, would be in attendance. 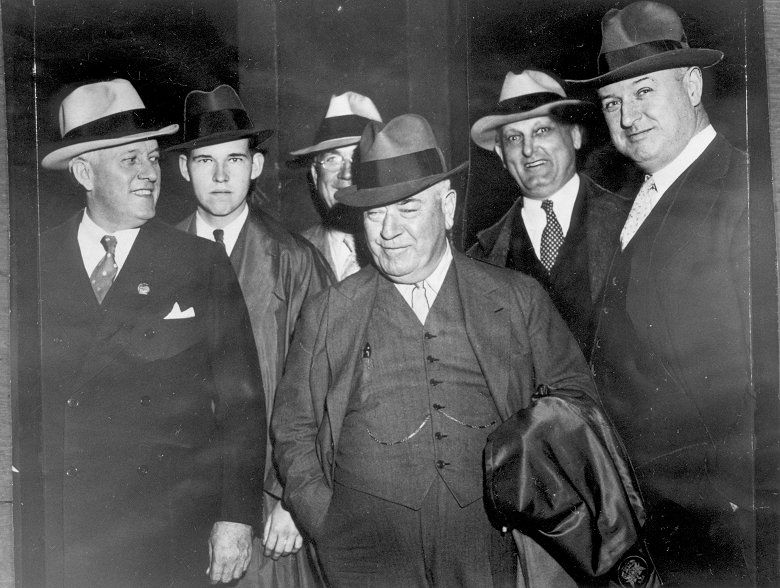 http://www.squeezeboxcity.com/irishimmigration/
​Harry Truman received his first political employment under the tutelage of Tom Pendergast.  He was approached by Tom’s nephew, a man Truman served with during World War One, about serving as one of the Jackson County district judges. This was in 1922 and Truman was elected as the County judge for the Eastern District of Jackson County.  He would be re-elected in every race but one until 1934.  It was in 1934 that Truman campaigned for the U.S. Senate with Tom’s help.  Truman did get the senatorial seat and some mockingly referred to him as “the Senator from Pendergast” because of Tom’s help. 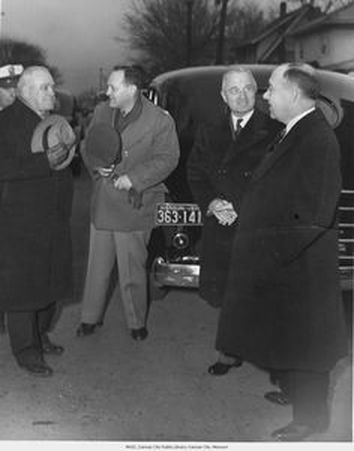 http://www.kchistory.org/cdm4/item_viewer.php?CISOROOT=/Assorted&CISOPTR=1000
Harry Truman spent close to twenty years serving Missourians (whether it be just Jackson County or the entire state) with the guise of Tom Pendergast hanging over him.  Truman didn’t bow to Pendergast at any time.  He may have utilized Tom’s influence to get into the elected offices, but Truman was resistant to being pushed into anything desired to help Pendergast.  Harry told Tom that he worked for the people, not for Tom.  This may have angered Pendergast, but he knew where he stood with Truman and there was a certain mutual level of respect between the two men.  That was why Harry Truman, then-Vice President of the United States, would travel from Washington, D.C. back to Missouri to attend the funeral of Thomas Pendergast in 1945.  He went to pay his respects to a man that had helped him to get where he was, a man inches away from being the President of the United States and the conqueror of the Second World War with the Atomic bombs that would be dropped on Nagasaki and Hiroshima. 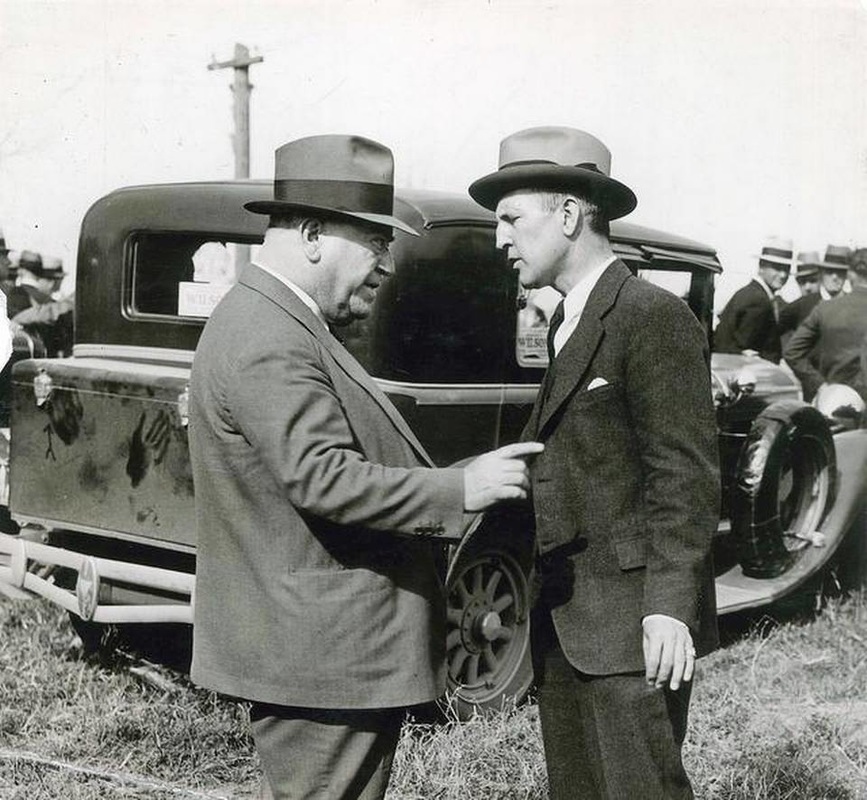