Adair County R-1 Social Studies
There are lots of women who were named as “Molly Pitcher.”, during the Revolutionary War.  Margaret Corbin, who helped her husband John Corbin, who was also an artillery man in the Continental Army, she helped with the cannon after John was killed in the battle of Fort Washington until she was injured.  There’s also Deborah Sampson and the courage she showed on the battlefield as she fought along side the men. Some people believe that the name could just be a title of all the women who were in the Continental Army. Anyone of them could be the said, “Molly Pitcher."
Most of the actions of “Molly Pitcher” are given to a woman named Mary Ludwig Hays-McCauley. Mary was born on October 13, 1754 to German immigrants by the name of John George Ludwig and Gretchen Ludwig, in the city of Trenton, New Jersey. She also had three brothers. Mary had little education, she could not read, nor write, because education was not considered for girls at that time. But she was helped around with the daily chores on her parent’s dairy farm.
When Mary was fifteen years old, Anna Irvine, who was the wife of Dr. William Irvine, was visiting the Ludwig farm; she saw how Mary worked at her parent’s farm. Anna was impressed, so she asked Mary if she would come back to Carlisle, Pennsylvania with them, to be a servant in their household.  Mary accepted Anna’s offer, so she could send money home to her parents to help them out. While Mary was in Carlisle, she met William Hays, a barber.Mary and William were married on July 24th, 1769, in the Irvine’s home. The Irvine family kept their marriage license as Mary worked in their household several years after their marriage.
Then, on the day of July 12th, 1774, Dr. William Irvine held a meeting in the Presbyterian church in Carlisle. He though about boycotting the whole town against British goods, a kind of protest of the Boston Tea Act and he had several people enforcing the boycott, like William Hays. Then in 1777, William Hays enlisted in the Continental Army, which was part of Dr. William Irvine’s unit he commanded as a colonel in Washington’s army. In the winter of 1777, Mary joined up with her husband’s unit at Valley Forge, Pennsylvania, as a ‘camp follower.’ She was in a group of camp followers, led by Martha Washington, and they would bake bread, deliver food, wash the soldiers’ clothes, and also care for sick and dying soldiers.
In the early spring of 1778, the unit became under the command of Baron Von Steuben. By that time, William was training to be an artilleryman, while Mary was a ‘water girl’. Along with other girls, they would fetch water to the troops on hot days. Artillerymen needed a lot of fresh water to keep the cannon barrel cooled down, plus they needed the fresh water to clean out the cannon, with a special tool called the ramrod. The ramrod was a long pole with a wet rag tied to the end of it and they stuck it in the cannon after each shot to clean sparks and gunpowder out.
It was at the Battle of Monmouth, in June 1778, Mary had found a spring that she was carrying water out of to the soldiers. The soldiers would cry out, “Molly! Pitcher!”, when they needed water. Molly was another name for Mary during that time and that’s what they used when they needed her to bring them water. On a hot day, over 100 degrees Fahrenheit, William Hays collapsed next to the cannon he was working. It was either from heat exhaustion or he was injured, but he didn’t get killed.
As William was taken off the battlefield, Mary took his place at the cannon. She had to ‘swab and load’ the cannon, using the ramrod. During the day, a British cannon shot passed between her legs, taking off a piece of her petticoat. Mary didn’t act worried, she was just glad it didn’t pass any higher. And she went right back to working the cannon.
Then later, it was getting dark and no one was fighting. The company expected the fighting to continue the next day, but the British retreated back to Sandy Hook. It was a victory for the Continental Army. At the end of the war, George Washington called for the woman who was working at the cannon. For her courage, Washington gave Mary a warrant as a non commissioned officer.
And Mary was then called, “Sergeant Molly.”, as a nickname for the rest of her life that she used. Mary and William went home to Carlisle, Pennsylvania and it was there she had their first born son, John. In 1786, William died and Mary was remarried to John McCauley, who was also a Revolutionary war veteran and a friend of William’s. Mary and John didn’t have a happy marriage because of John’s horrible temper, and then between 1807 and 1810, John McCauley disappeared mysteriously. No one knows what happened to him.
So Mary continued to live in Carlisle, Pennsylvania as a servant, cleaning windows, caring for children and sick people. She often wore a striped skirt, wool stockings and a ruffled cap. The people of Carlisle liked her, but the problem was that she “cursed like a soldier.”On February 21st, 1822, the Commonwealth of Pennsylvania gave Mary her pension of 40 dollars for her heroism and service. On January 22, 1832, in Carlisle, Mary Ludwig Hays-McCauley died at age 87. She is buried in the Old Graveyard with the name “Molly McCauley.” There is also a statue in Carlisle, Pennsylvania, of “Molly Pitcher.”, surrounded by cannons in the cemetery.


Enclosed is a wordsearch on Mary Ludwig Hays-McCauley. 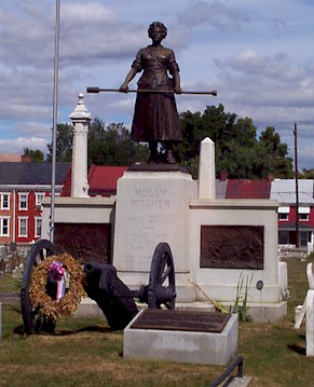