Chapter 7 Section 1 "The Articles of Confederation"

The Articles of Confederation was drawn up during the Second Continental Congress in 1776.  A committee was appointed to construct the plan of government that would be a precursor to the current United States Constitution.  John Dickinson served as the chairman of the committee.  The Articles of Confederation was adopted as the first official constitution of the United States of America in November 1777.  Because of the abuse of power the representatives felt that the King of England had conducted prior to their independence, they were reluctant to create a strong central government.  The Articles served as a "firm league of friendship" between the thirteen states.  Each state maintained much of it's existing power, sovereignty, freedom and independence.  The Articles of Confederation would not be completely ratified until all thirteen states had approved it.  That did not happen until March 1781.

The Articles of Confederation established a unicameral (one house) legislature as the primary body of government.  There were no Executive of Judicial branches of government as were designated in the Constitution.  The legislature, or Congress had the authority to conduct foreign affairs, maintain armed forces, borrow money, and issue currency.  To raise money or call on troops, the Congress had to ask the state legislatures.  It could not impose taxes, regulate trade, or make people serve in the military.  New laws could not be passed unless nine states voted in favor of the proposed law.  There were several weaknesses to the Articles of Confederation, even though it did have some positive contributions. 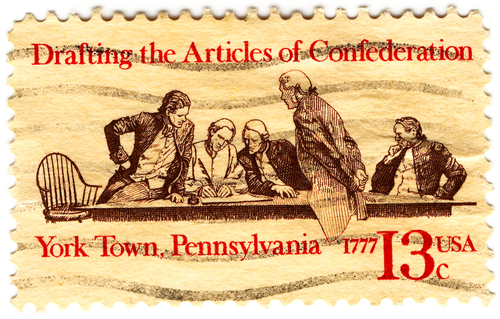 Let us in!  We want to be Official. 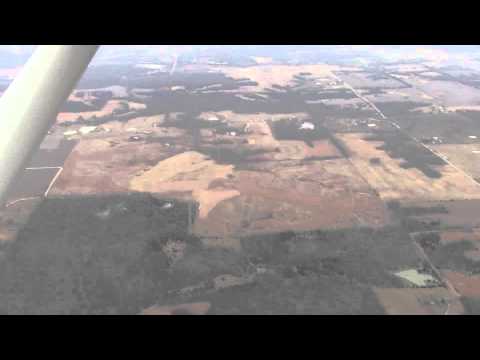 All of us have seen those images like the one above, taken from an aerial position, looking at the lay of the land.  We see the patchwork squares of land, looking like grandma's quilt on the ground below.  Have you ever wondered why the land is so often divided in squares like that?  Did you know that it goes all the way back to Thomas Jefferson.  Jefferson proposed a plan to lay out townships not long after the Revolutionary War.  Although there were boundaries already in place for the existing thirteen original states, the nation was gaining lands to the west.  There was a need to organize and distribute lands to war veterans as a reward for service.  The nation was also in need of raising money through the selling of these lands to the public.  If these events were going to happen, the land had to be surveyed. 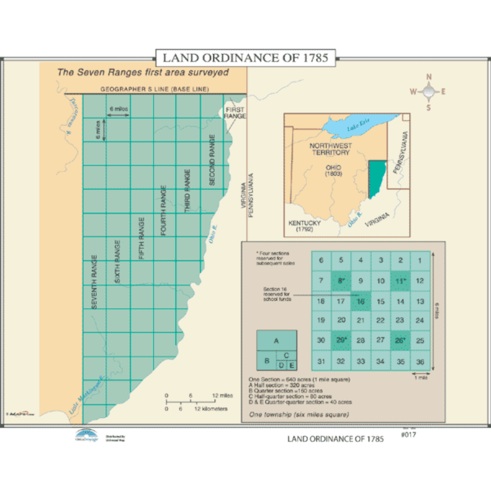 The Confederation Congress passed the Ordinance of 1785 to address how to deal with land north of the Ohio River.  It established townships that were six miles long and six miles wide.  Each township was divided into 36 sections of 640 acres.  These lands would sell at public auction for no less than a dollar an acre.  Some people saw these sales as a chance to get rich quickly.  Because of this land speculation, Richard Henry Lee recommended to the Congress to draft another ordinance to protect the interests of hard-working settlers. 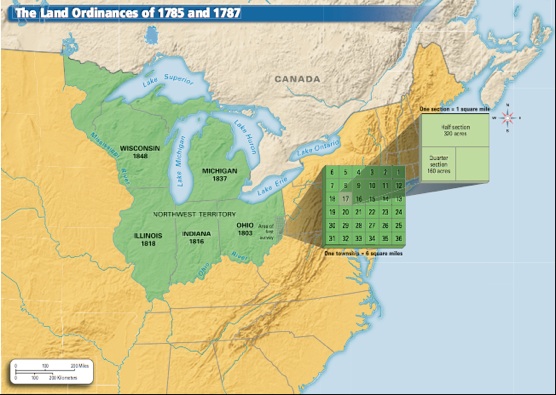 There was a Bill of Rights in the Northwest Ordinance for the settlers, guaranteeing religious freedom and trial by jury.  As the first attempt to stop slavery from spreading, the Ordinance declared that "there shall be neither slavery nor involuntary servitude in said territory."  This would become a concern for some settlers that may have come from areas where slavery was fully established.
How would these parcels of land be split up to benefit all parties involved?  The creation of the Public Land Survey System (PLSS) paved the way for establishing boundaries and is still in effect today.  Of the 36 one-mile-square sections of each township, two sections are reserved, one for government and the other for education.  Section 16 was set aside as the education section. 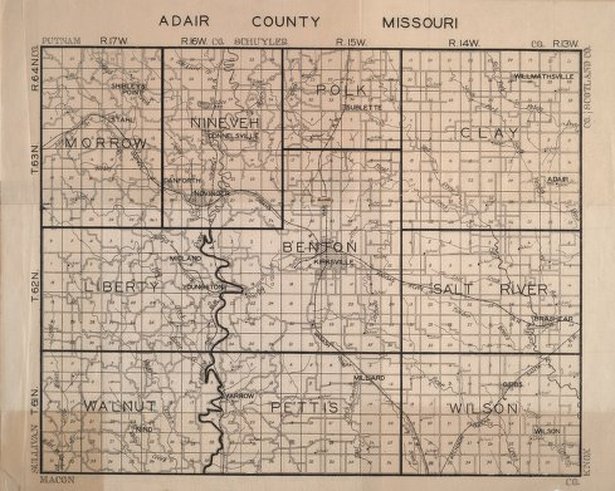 This is what is known as a "plat map" for Adair County.  You can see the different townships created for our county.  Townships are different than cities or towns, as both Novinger and Connelsville are located in the township of Nineveh and Kirksville is in the township of Benton.  As is common practice for natural boundary divisions, the Chariton River makes up the boundary that divides the township of Liberty from Benton and Walnut from Pettis.

We don't normally think about these townships today.  There are two main times that we consider the townships where we live.  One is when we purchase property and want look at the "legal address" to know just what land we actually own.  The other deals with voting.  On your voter's registration card, it lists which township you live in.  The township decides where you will cast your vote.

You may have heard about properties being sold "at the court house door."  When a property owner defaults on taxes or loans on the property, they have a certain period of time to pay these debts before the county offers the property for sale at an auction held at the county courthouse.  The county assessor will post an advertisement of the auction in the local newspaper three times before the actual auction.  The property will be identified in the advertisement by it's "legal address" which shows the township and section where the property is located.  Although the defaulting property owner can still settle their indebtedness after the auction, other people may bid on the property.  The highest bidder will get a temporary deed for the property and may get full possession several months later.

Open the following document and answer the questions, saving your answers on the document.  Either submit the file to your teacher or print it out and hand it in.
Chapter 7 Section 1
Powered by