How do you define a minority?  It is a group with the least number of participants within a community?  A nation?  Is it measured by race, religion, nation of origin, or something else?  Are there minorities where you live?  Do you recognize that fact or should you?

Native-born Americans have not always welcomed newcomers with open arms; indeed, they have done the opposite.  There have been times that we have forced groups of people to live in certain locations, passed laws to restrict others from immigrating to this country, and placed U.S. citizens into internment camps due to their heredity.  For some, the American Dream has become a reality; for others, blocked opportunities create an American nightmare.

Of course, this is not a situation that is strictly “American.”  Many other nations have done similar, or worse, things from the dawn of “civilization.”  Within any society, groupings of people by race, religion, tribe, culture, or lifestyle can generate prejudices, tensions, and sporadic outbursts of violence.  So we can’t simply blame the United States for atrocities and abuses.

The early days of white settlement in North America quickly became European dominated.  The British settlers arrived at Plymouth Rock and Jamestown and before you knew it, the land became British.  The original thirteen colonies along the Atlantic coast were inhabited by immigrants coming from England, seeking religious, political, or economic freedom.    Once the lands had become the United States of America, the white, European culture was the dominant group, even though the predominant population was indigenous.   A dominant group , according to “The Free Dictionary,” is “a social group that controls the value system and rewards in a particular society.” (http://medical-dictionary.thefreedictionary.com/dominant+group)   Another definition is “The group that has the greatest power, but not necessarily greater numbers.”  This group has indeed held the dominance in our nation from existence.  We have lived in a world that is possessed by a WASP (white, anglo-saxon, protestant) viewpoint.  Another way of looking at this is that our society and culture has been Euro-centric all of these years.  Eurocentrism is having a perception that has a predominance of Western Europe (France, Great Britain, Germany, Spain) and the American colonies.  In some studies, the concept of Americentrism has transposed this viewpoint but still expresses that Western center of thought.

Eurocentrism is basically one view of having one’s own heredity at the center of all belief.  Such a view is also known as “ethnocentrism.”  Ethnocentrism is the judging another culture solely by the values and standards of one’s own culture.  Consider the idea that there were present with the use of Greenwich with the Prime Meridian.  Several other longitude points were used across the globe as prime meridians in spite of this location at the “O degree longitude.”  Understandably, not every culture holds the same ethnocentrism.  Maps in the United States tend to have North America and Europe in the center, but maps in Australia or other locations in the Southern Hemisphere look quite different from those with which we are familiar. Do you think that people living in Australia practice the use of referring to their home as “down under?” 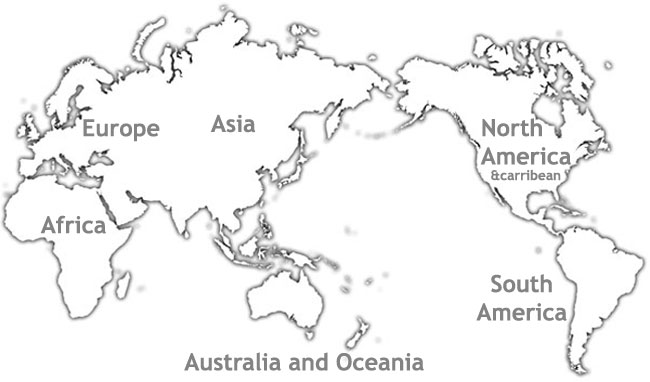 Think of the following concepts.  In a Eurocentric viewpoint, the countries of Iraq, Iran, Yemen, and others are said to be in the “Middle East” but would “Southwestern Asia” be more appropriate?  This is an example of Eurocentrism in regional naming.  World History is often taught with a strong Eurocentric bent.  The history of Europe and the United States gets the most detail and Asia, Africa, and Latin America tend to be slighted.  Plus, little mention is given to the Americas prior to European exploration.  What about science and technology?  We have learned about the Greeks, the Romans, and then the Renaissance and the Industrial Revolution.  But where is the discussion of the achievements of Indian, Chinese, Ancient Egyptian, Moorish, or Muslim thinkers?  Little coverage of Indian, Chinese, or Islamic contributions to mathematics gets covered.  Who gets more text in a World History book, Aristotle or Confucius?  Aristotle made the comment “We like those who resemble us, and are engaged in the same pursuits.”  We can also look to literature and find the same concepts of Eurocentrism.  Stanley’s “In Darkest Africa,” chronicling his travels to find Dr. Livingstone in the depths of Africa, is one example that quickly comes to mind.  Much of our educational texts are written with a Eurocentric slant, non-white, non-European dissent peoples are referred to as “they” and “their,” words that separate instead of bridging.  Even Karl Marx wrote with from a Eurocentric angle.

There are certain beliefs, valid or otherwise, that have led Eurocentric thinkers toward ignoring, undervaluing, or condemning non-European societies. There is a wide range of these, some applying more broadly in chronological terms than others. They include the following:

What can we do to consider equal ground for all parties in society?  Do we ignore the works of non-WASP contributors or add these to our educational experiences?  This is a choice that is yours to make. 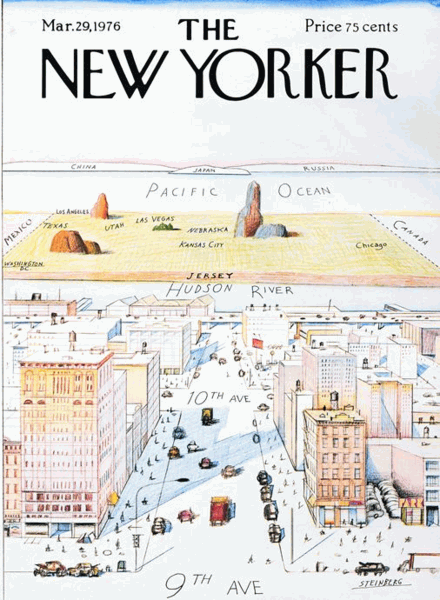 Examine this classic cover of the “New Yorker” magazine.  What ideas are being portrayed here?  What are your thoughts?  How does this portrayal make you feel?