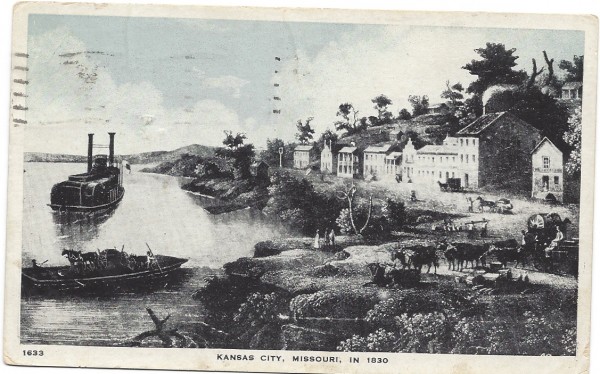 Kansas City in 1830.
Missouri is a state centrally located in the nation.  It has predominantly had a rural, agrarian culture, surpassing a total population of one million residents just prior to the Civil War.  Transportation, steamboats and railroads, contributed to the growth of Missouri’s largest communities.  Industry also played a strong role in these towns’ growth.  The two largest communities in the state have always remained Kansas City and St. Louis on opposite ends of the state.

The rise of Kansas City shows the forces that transformed society during the last part of the nineteenth century.  Because of aggressive, committed leadership, Kansas City succeeded in bridging the Missouri River four years before St. Joseph did in 1873.  This allowed this community to surpass St. Joseph in being the key major city of western Missouri.  Kansas City benefited from railroad construction and agricultural development in the region, serving as a processing center for farm products before sending them to eastern markets through the Cameron spur and the Hannibal and St. Joseph Railroad.  It was at this time that the Pacific Railroad connected Kansas City with St. Louis.  There were some twenty-four railroads serving Kansas City by 1887. 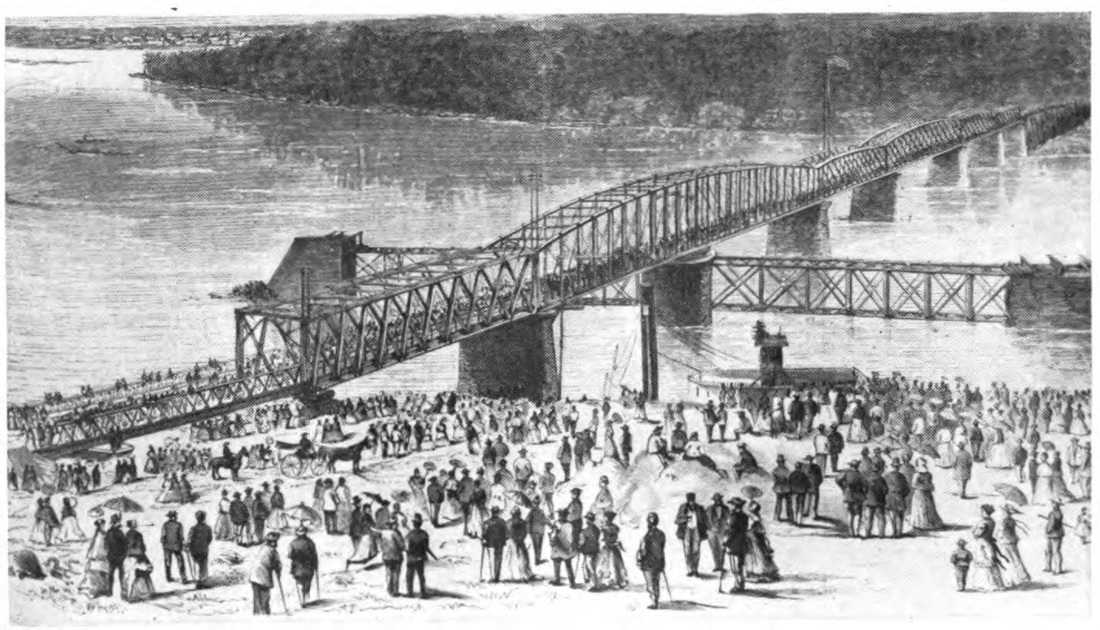 The Hannibal Bridge, named so for the Railroad that would cross the Missouri River upon this bridge. It was completed in 1867 and replaced by a new bridge in 1917. This was the first bridge to cross the Missouri River and established Kansas City as the major city it would become.
Farmers shipped their cattle and livestock on those trains to the Missouri city.  L.V. Morse and James Joy of the Burlington Railroad purchased five acres for a livestock yard in 1870.  The next year their efforts grew to almost fifteen acres, and they began construction on the livestock exchange building and incorporated the Kansas Stockyards Company.  By 1880 farmers shipped just under a million cattle, hogs, and sheep to the Kansas City market.

When the yards opened, three local firms packed meat.  In the same year Plankington and Armour, a national firm, joined them.  Ten years later the Armour plant employed 600 workers and consumed 2 million board feet of lumber, 3,000 tons of salt, and $60,000 worth of barrels annually.  Other national firms entered the competition, including the Fowler Brothers and Jacob Dold in 1880 and Swift in 1887.  By 1890 eight meat-packing companies had invested $1.5 million, employed more than 6,000, and paid over $4 million in wages a year.  They consumed raw materials valued at almost $30 million per year.  At the turn of the century only Chicago surpassed Kansas City as a meat-packing center. 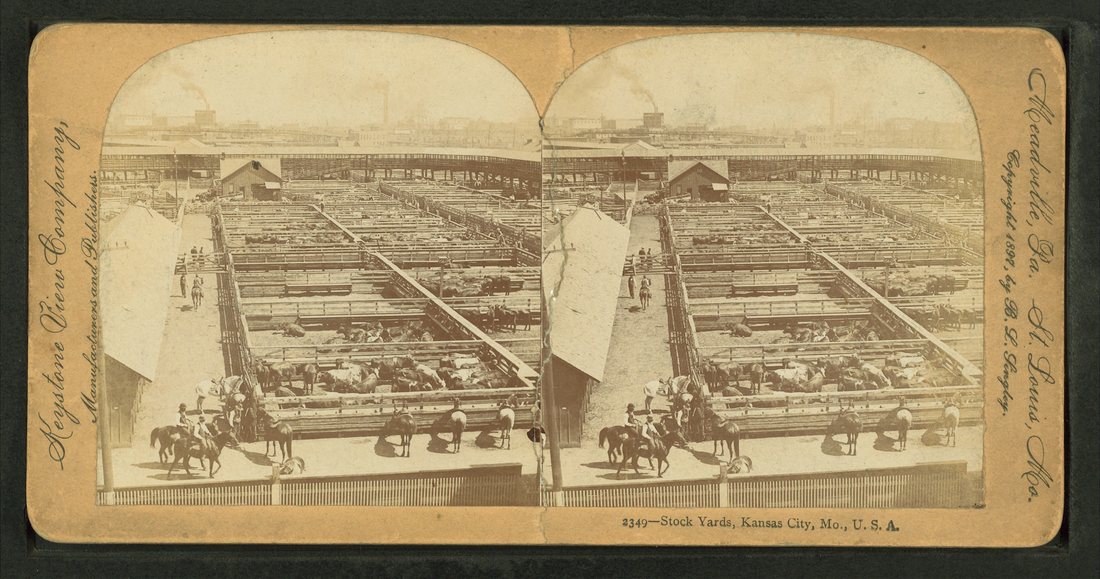 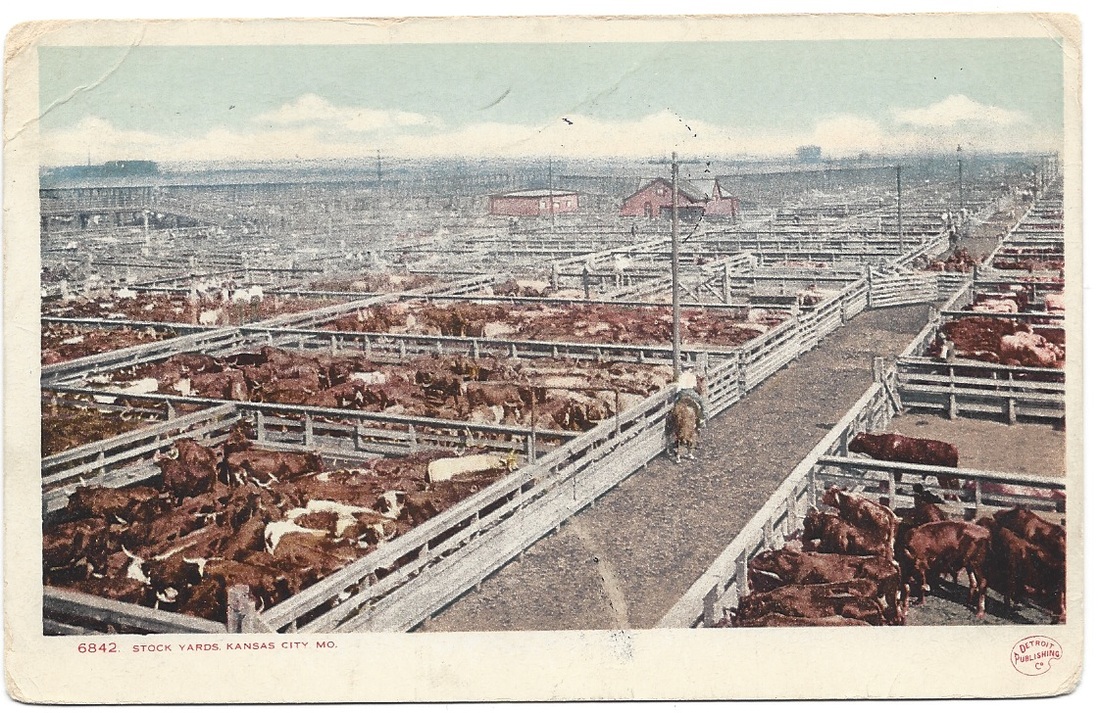 In 1871 Kansas City received about 687,000 bushels of corn and 350, 000 bushels of wheat.  Five years later 5, 769,295 bushels of corn and 1,820,297 bushels of wheat entered Kansas City.  Businessmen built elevators to store the grain and mills to grind it into flour.  An increase in Missouri’s farm acreage and , more significantly, the introduction of hard-kerneled winter wheat into Kansas brought further expansion to Kansas City’s storage and milling facilities.  Kansas wheat production went from 25 million bushels in 1875 to 75 million bushels in 1892.  Technology to turn the hard wheat into flour developed in Minneapolis in 1871; Kansas City millers soon adopted the same.  In 1879 chilled iron rollers replaced mill stones, making it easier to grind grain into fine flour.  By 1900 Kansas City ranked ninth in the nation as a producer of flour.

With its expanding industries and population, Kansas City experienced rapid physical growth between 1870 and 1900.  One historian asserted that real estate was the city’s most dramatic business.  Developers platted ten additions during the difficult economic times between 1873 and 1876, thirteen additions in 1879, and twenty-seven in 1880.  The boom collapsed in 1887 due to overexpansion and did not resume until after the Panic of 1893 subsided.  Unlike some cities that underwent similar real estate expansion, Kansas City succeeded in avoiding the worst effects of urban sprawl because of concerted efforts of civic leaders such as William Rockhill Nelson.

Nelson arrived in the city from Indiana in 1880.  He was not a young man, already thirty-nine, but he established the Kansas City Star and Times and through their pages urged Kansas City residents to support the planned development of their community.  Before his death in 1915, Nelson had seen the rather scruffy, chaotic place where he had established the Star transformed into a city with beautiful parks, extensive boulevards, and the most up-to-date conveniences. 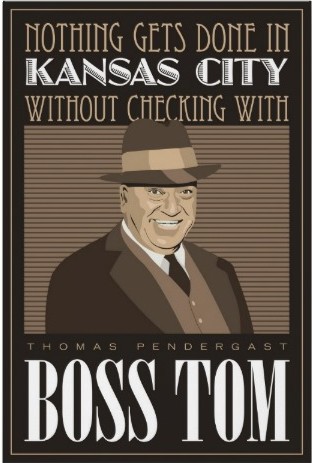 As the nineteenth century ushered in the technological advances of the twentieth century, Kansas City would be moving toward an image of organized crime and corrupt politics.  Political party bosses, such as Boss Tom Pendergast, would exert strong influence on the progress in this fledgling metropolitan area.  Even with less than honest efforts, they would contribute to the continued growth of the great city on the Missouri River. 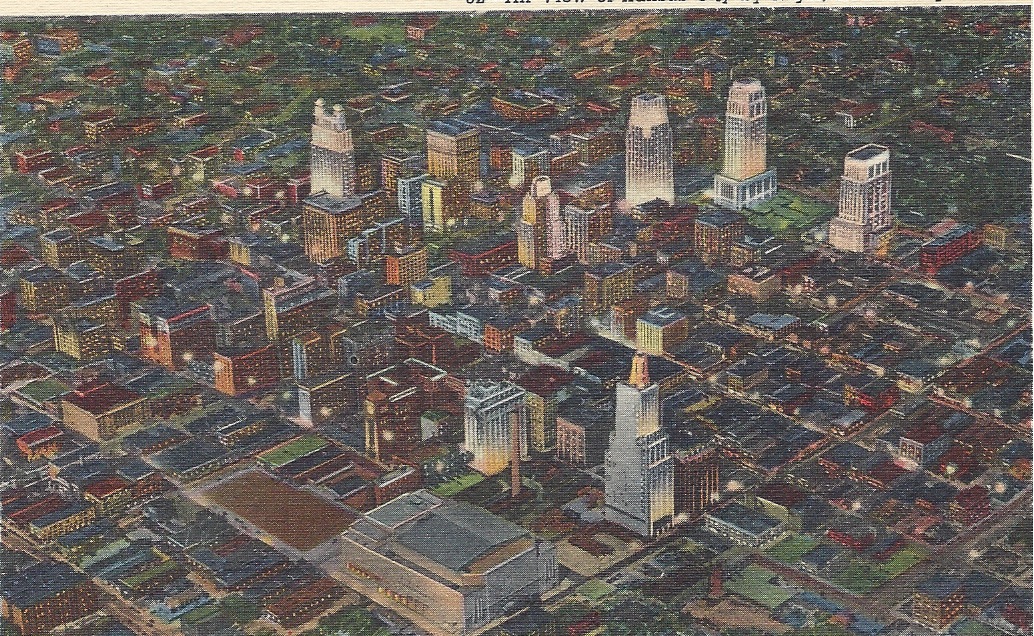 Kansas City during the early 20th Century after electricity had fully become a major component of city life in the community. 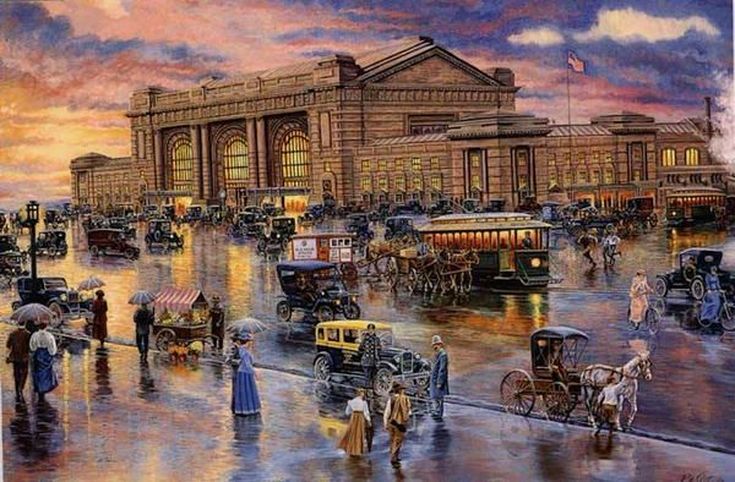 Painting depicting the busy hustle and bustle of Kansas City near the Union Station train depot in the early 20th century.  Early streetcars in Kansas City were powered by underground cables, a common practice for this mode of transportation.  The cables would cause shock to horses crossing them, due to the metal used in horseshoes. 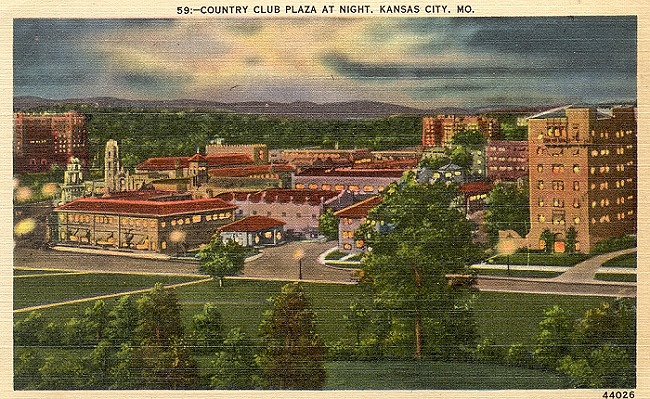 (Above and below) The Country Club Plaza was completed in 1922 holds the distinction of being the first shopping center designed for access by automobile.  Many consider it the first shopping center.  With both high-end shopping opportunities and general shops for the common customer, the Plaza as it is known locally also has provided amusement and dining opportunities.  It is known as the longest continually operating shopping center in the world and is famous for it's holiday lighting extravaganza during December yearly. 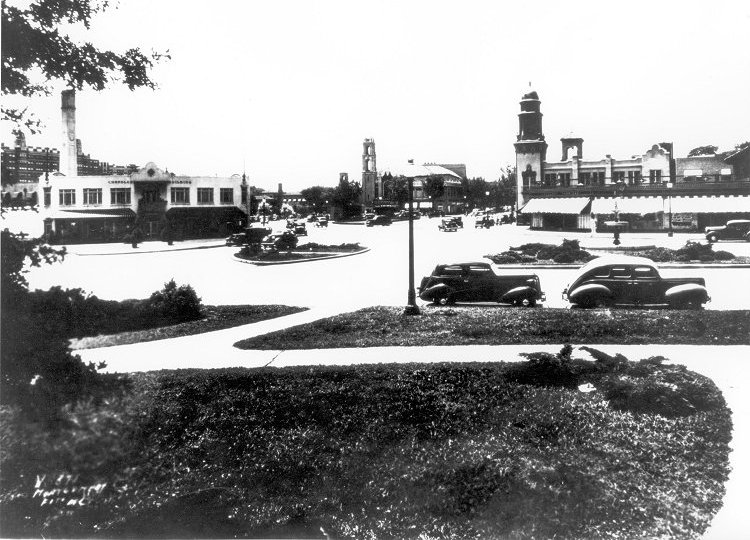