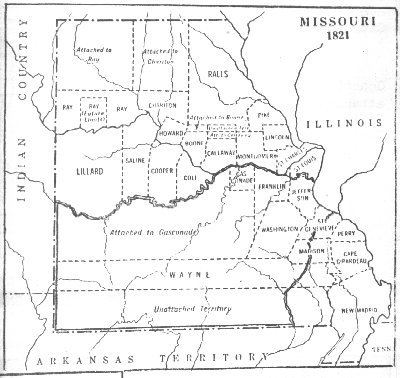 Missouri continued to increase in population during the early years of the 19th Century.  As the War of 1812 began, Missouri was upgraded to a second-class territory with citizens electing members of the lower house of their territorial legislature and choosing a nonvoting delegate to the national House of Representatives.  The President still had reserved powers to appoint a territorial governor, judges, many other officials, and the upper house of territorial legislature.  County officials managed business on a local level.  Without legislative power, these individuals could assess and collect taxes.  They supervised road construction and other public works, licensed businesses, and administered local justice.  A person had to prove citizenship with a tax receipt to vote or hold public office.  Four years later, in 1816, Missouri advanced to a third-class territory.  People living in the territory could elect both houses of state legislature and look forward to statehood, which was just around the corner.

Statehood was seriously on the minds of those living in Missouri in 1816.  Petitions began heading around the next year and were presented to Congress in 1818 to request statehood.  Congress did little to acknowledge the request, perplexing many in the territory.  Why wouldn’t the legislature grant their request to become a state?  They did have the required population. 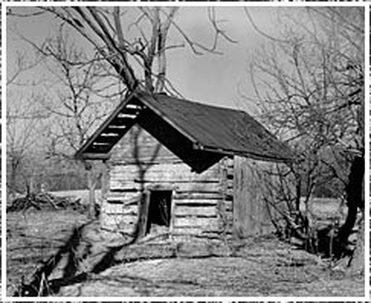 Typical slave cabin in Cooper County, Missouri
The answer was found in the issue of slavery.  Since many of the emigrants into Missouri had come from southern slave states, they brought with them that human property.  Many in the north and along the rivers had slaves.  The United States was beginning to throw a natural concern about the issue of slavery into government and territorial issues.  A one-term congressman from New York City, James Tallmadge, Jr. proposed in Congress to have a gradual extinction of slavery in Missouri.  Tallmadge had portions of his district that were predominantly black and was concerned about how the Union would look at slavery in the coming days.  Do they accept Missouri as a slave state or free?  Either way, there was going to be an imbalance in the legislature.  There were currently an even split between the 22 states in Congress, slave and free.  If Missouri was to enter that would make one side or the other have an advantage.  Neither camp wanted to see that.  This caused a delay in Missouri seeing itself become a state

The savior in the situation would come from a small area in the far-northeast.  The northern counties of Massachusetts were seeking their own statehood as Maine. If accepted for statehood, Maine would be a free state.  Allowing both Missouri and Maine to enter the legislature would continue the equal balance in the legislature. 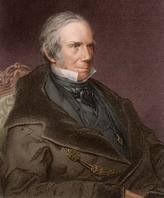 Enter in Senator Henry Clay of Kentucky.  Clay looked at earlier suggestions on what to do about the statehood/slavery issue.  He proposed what would become known as the Missouri Compromise.  In Clay’s proposal, a slave state could be added to the Union ONLY if there was an area that was willing to join the Union as a free state at the same time.  Clay suggested that slavery be forbidden north of an imaginary line across Missouri’s southern border, or the 36 degree 30’ latitude.  The compromise would be accepted, allowing Missouri entrance into the Union as the 24th state on August 10, 1821.  There was more than 10,000 slaves in Missouri at the time.

The Missouri Constitutional Convention met in St. Louis on June 12, 1820 to develop a state constitution for Missouri.  Headed by future Senator, David Barton, the team consisted of many recent immigrants and several were from the South.  So the view of slavery is basically a given for Missouri as these men worked together to prevent the anti-slavery members of Congress from making slavery for Missouri a thing of the past. 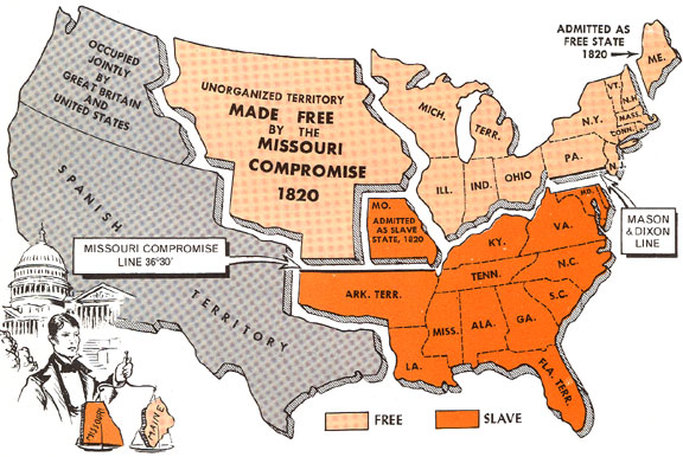 Following the acceptance of the proposed constitution, elections were held in Missouri for the proposed elected seats for the acceptance into statehood.  Instead of two political parties dominating the election, there were two groups or factions of beliefs represented in the election.  A small group of individuals who had long been involved in the territorial politics of the region was based in the St. Louis area.  This group, the “little junto” as it was known, also had the old French element as part of it.  They were interested in land and the fur trade.  They were not as organized as we come to see political parties today.  They supported William Clark to be the governor.  The other group wanted to squelch the old power bloc that had ruled territorial politics for so long.  They supported Alexander McNair for governor.  McNair had run the federal land office at St. Louis since 1818.  McNair was a favorite of the newer immigrants to the area.  He was actively involved in campaigning in the area while Clark had spent his time in Virginia caring to his ill wife. 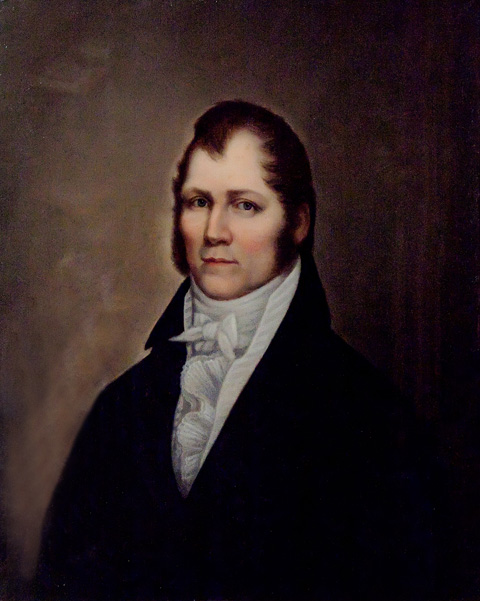 Alexander McNair, First State Governor of Missouri.
These situations would play a major affect in the election and damage the “little junto” or “St. Louis Clique” as it was called.  McNair would win the gubernatorial election.  Fur-trading leader, William H. Ashley, would gain the position of lieutenant governor of the St. Louis Clique backed candidate.  The only true Clique candidate to win a seat was John Scott of Ste. Genevieve who won the congressional seat in the House of Representatives for Missouri.  Missouri’s senators would be selected by the state legislature, the practice at that time.  Two Tennesseans, David Barton and Thomas Hart Benton, would be our first senators.  Benton was connected to the little junto but was also popular throughout the territory.  Barton had kept from being attached to either faction.  Both men would play key roles in the future of Missouri politics and the nation. 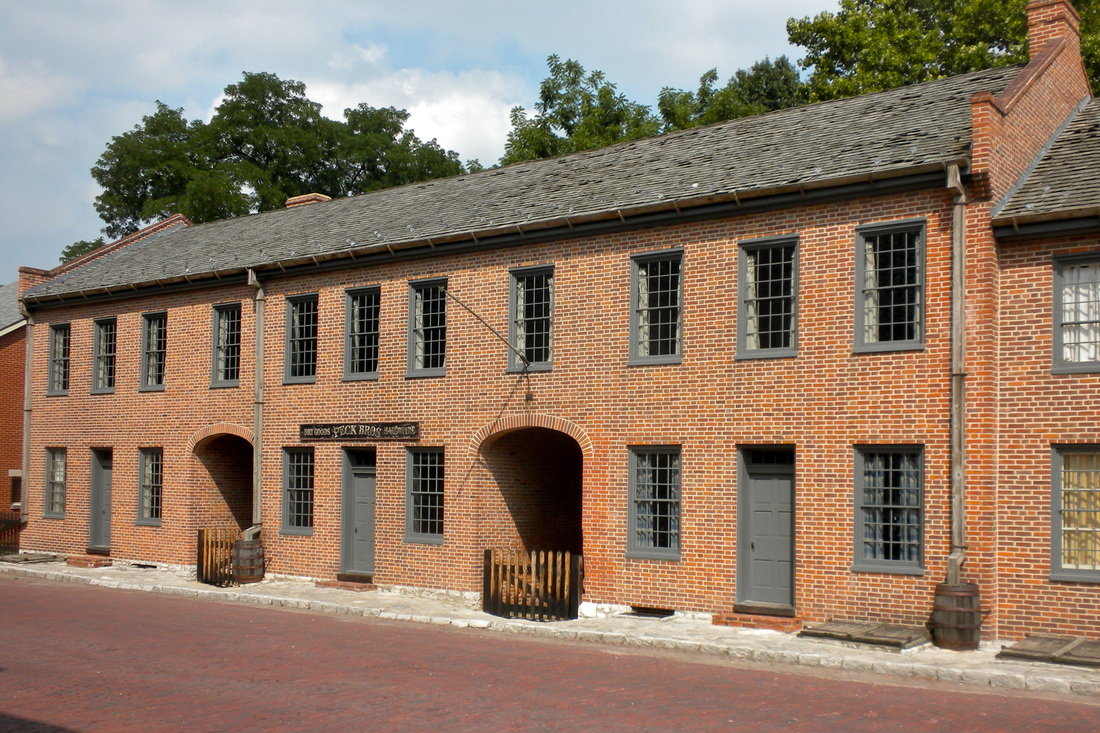 Historic 1st Capitol Street, St. Charles, Missouri.
The first capital of Missouri was in St. Charles.  This was a temporary setting until a permanent site could be settled upon.  Missouri’s constitution called for a capital city to be located centrally along the Missouri River.  There was no town that fit that description in 1821.  After some speculation and debate, the current location was settled on and the City of Jefferson, or Jefferson City was built and became the permanent state capital in 1826.  It was named for President Thomas Jefferson, the president who acquired the land in which Missouri was a part.