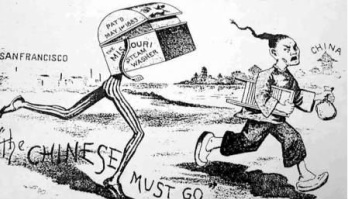 Japanese Internment Camps: Over 127,000 United States citizens were imprisoned during World War II. Their crime? Being of Japanese ancestry.

Chinese Sex Slaves of the 1800’s: Many of these women were lured to America under false pretenses or sold by their impoverished families and some cases they were abducted. Trafficking women was a very lucrative business that was often run by tongs in Chinatowns. It was easy to make 850 dollars a year off even a low grade prostitute (Takaki, 1998). Life for these women was abusive and often short. Most often the women became drug users to escape from their sordid reality or in other cases were beaten to death or were victims of venereal diseases.

Asian Racism: Until 1965, when the Magnuson Act was repealed, Asians were not only barred from immigration, but Asian Americans in all 50 states, including US citizens, were legally disfranchised and subjected to high rents and punitive taxes.

In 1982, a Chinese American was bludgeoned to death in a racially motivated attack in Detroit. His killers walked free with a mere $3,000 fine, with the judge ruling that they were “not a threat to society” by virtue of their being gainfully employed citizens at the time of the murder.

Until 2001, US laws against ethnic-Chinese immigration and property ownership (Alien Land Acts) remained intact in states such as Wyoming.

Squinty Asian chink-eye jokes are considered harmless fun by many. Would it have been equally acceptable if Disney girl Miley Cyrus (third from left) and her pals had pulled out their lower lips to make “fat-lip nigger” jokes to highlight a lone African-American in their midst?

Asians, who currently represent 5% of the US population, continue to be severely underrepresented as a minority group in movies.

1830s: Following their exploitation by a circus, the Siamese Twins (ethnically Chinese-Thais), Chang and Eng Bunker, go into business for themselves and tour America for seven years as part of a curiosity display

1834: The Chinese Lady (Julia Foochee Ching-Chang King, later given the moniker Afong Moy by her circus agents), the first documented Chinese female to come to America, arrives in New York. She is marketed as a cultural and curiosity exhibit. Thronging crowds pay to see her and her tiny feet, which are deformed by the Chinese practice of foot binding.


1867: On the arrival of spring, the frozen bodies of several dozen Chinese laborers are found as the ice and snow melts away. Many had died in one of the harshest winters in history. Chinese laborers, who tended to be assigned the riskiest of the jobs, were often caught in avalanches. Many had died still clutching onto picks and shovels.

1873: San Francisco passes a Laundry Ordinance, penalizing Chinese laundrymen for not using horses or horse-drawn delivery vehicles—as a rule they deliver laundry on foot, carrying them in two baskets attached to the ends of a pole balanced on their shoulders.

1896: A Chinatown in Honolulu is burned down due to a bubonic-plague scare.

1913: The California Alien Land Law is passed in response to increasingly successful Asian farmers, prohibiting all Asian immigrants from owning land or property, permitting them maximum leases of three years at a time.

1930: Chinese wives are allowed to enter the US on the condition that their marriage occurred prior to May 26, 1924.

1956: The Refugee Relief Act of 1953 expires, with only 2,000 Chinese refugees being allowed into the US during its validation.