In 1782-1783, the Treaty of Paris was created. The beginning of talking about peace between the nations began in April 1782, in Paris, after the British was defeated at Yorktown. Representing for the countries were David Hartley representing Great Britain and Ben Franklin, John Jay and John Adams, Benjamin Harrison, Thomas Johnson, and John Dickinson, who were the American Peace Commissioners.  They all did much counter parting, out maneuvering and made points of the interest of everyone in the United States that helped guaranteed their future. The British would confirm that everyone west of the Mississippi river would have their own independence.
The British would also let the Americans go westward, giving them a chance to make a new life out in the west, creating westward expansion. The Americans would pay debts to British merchants, unpaid from before the war, and stopping the persecution of those loyal to the British, the Loyalists. The treaty was named after the city it was made in, hence the name, Treaty of Paris.  So they met with agreeable reasons for the British and the Americans. Two days before it was signed, the group was joined by Henry Laurens.
The group signed it on November 30, 1782.The very last page has the name of David Hartley, the Britain representative, along with Ben Franklin, John Jay and John Adams.   But it wasn’t finalized until, ending the war officially, September 3, 1783. The war was officially over. The Continental Congress ratified it on January 14, 1784 in Annapolis, Maryland.
There is also more than one Treaty of Paris that was used throughout different types of wars. A Treaty of Paris was used in the French and Indian War against the France and Great Britain. France had to give up all their territories in North America, on the mainland, which stopped any worry from a foreign military threat to them. Great Britain was in debt, the war had been long and expensive and the people of Great Britain were unsure if the old king could actually pay off the loans from the war. But King George the second died before he actually could and King George the third ended the war.
Besides the enormous debt, Great Britain had gained a lot of land. Canada and the United States east of the Mississippi became under their control. Many people wanted to move outward to the east to make new lives there. This caused a lot of tension between the Americans and the British. It got worse when the British made laws and wouldn’t let the Americans address their feelings about the new laws they had made.
In 1764 the British passed the Currency Act, which made it difficult for the colonists to pay their debt and taxes. Then along came the Stamp Tax, which had the colonists purchase a government stamp for documents and other papers. The Americans boycotted and the British decided it was easier to repeal the Stamp Act then enforce it. Then on December 16, 1774, the Boston Tea Party happened, with American colonists dressed as Indians, when they dumped tea over the side.  In result, the British closed the ports because of the destroyed tea.
Then after, a little later, the American Revolution happened. Treaty of Paris was used to end the Revolutionary War. And America was finally considered an independent and sovereign nation. 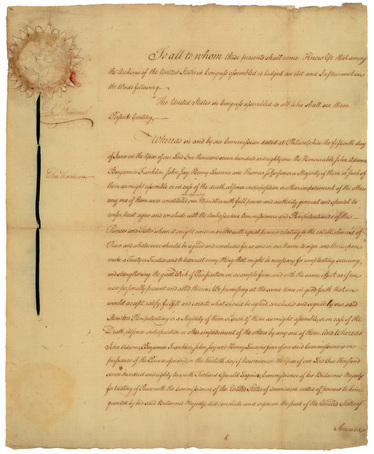