Makeup of Legislatures
Don’t expect to see the exact same examples of lawmaking bodies in every state.  While some definitely mirror each other, it isn’t always the case.  In some states the legislature is called the general assembly, as it is in Missouri.  In others it might be known as the legislative assembly.  New Hampshire has the largest legislature (for one of our nation’s smallest states, at that!) with more than 400 members.  Nebraska has the smallest legislature with only 49 members and is the only state legislature that is unicameral, or having only one house.  Every other state has an upper house, or senate, and a lower house, or house of representatives.  State senators often serve four-year terms, representatives serve two-year terms.  They each receive the same salary which ever house they serve in.  The house usually has two to four times as many members as the senate. 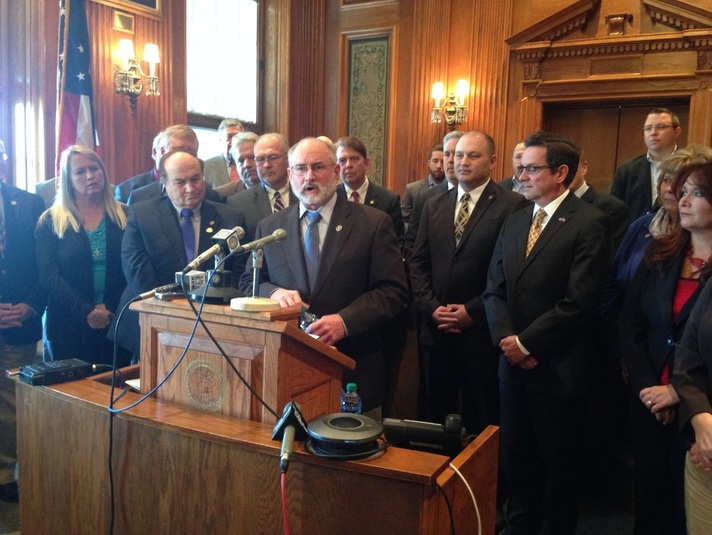 Missouri State Senator Brian Munzlinger (at podium). He is the senator for our district.
Each state constitution lists the qualifications for members of its legislature.  Generally, members must be American citizens and live in the district they represent.  Representatives tend to have to be at least 18 years old, while most states require senators to be somewhere between 18 and 30 for election.  In Missouri, representatives must be 24 years old or older and senators should be at least 30 years old. 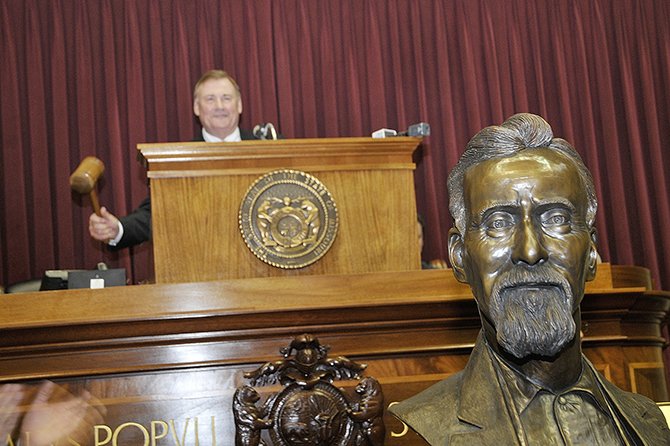 State Representative Nate Walker with the bust of Dr. Andrew Taylor Still in the Hall of Famous Missourians.
When our nation was first getting its feet off the ground, there wasn’t that much required of the legislators time.  Many met for only a few months every two years, and members received little more than token pay.  As state governments have become burdened with ever-growing responsibilities, however, membership in the legislature has become a more demanding job.  Legislatures may meet year-round, and pay for a member is becoming more suited to the level of work.
How State Legislatures Function
State legislatures run much in the same way that the U.S. Congress conducts business.  Each house has a leader to manage the affairs of that specific chamber.  The speaker of the house directs business in the house of representatives, and a president, typically the lieutenant governor in about half of the states, does the same in the senate.  Whichever political party has the majority in the house of representatives selects the speaker, and in states where the lieutenant governor does not preside over the senate, the majority party picks the senate president.  These leaders have a significant amount of influence over the results occurring for proposed legislation.
Where does an idea for a law come from?  You name it. Many different sources can provide ideas for bills in the legislature, from the governor, the executive branch, interest groups, individuals, and the legislators themselves.  State legislatures, in the same way as Congress, have various committees.  The majority party in each house chooses committee chairpersons.  After a member in either house introduces a bill, it goes to the appropriate committee of that house, such as the defense or transportation committee.
The committees study bills, hold hearings, and revise the bills if necessary.  In many cases, bills die in committee, never making it to a vote.  A committee may send a bill to the full house, with a recommendation that it be passed or rejected.  If the two houses pass differing versions of the same bill, it goes to a conference committee.  The conference committee works to make the bill agreeable to all members of the legislature.  Both houses must approve a bill and the governor must sign it before it becomes law. 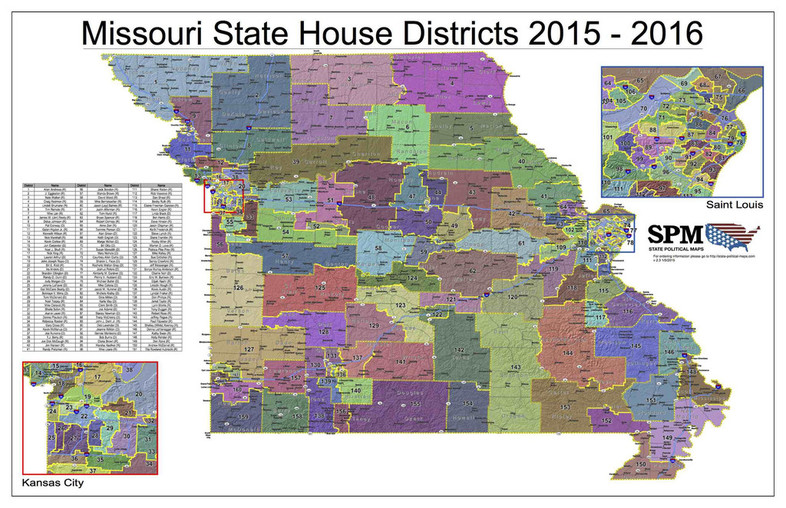 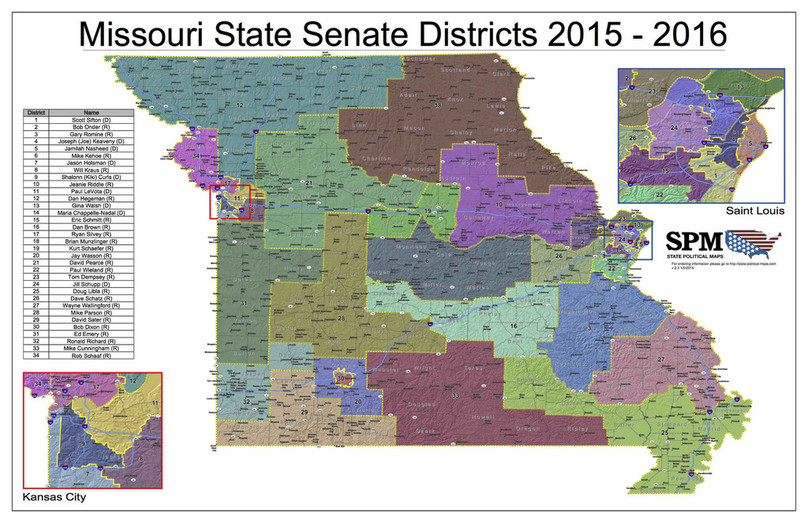 Legislative Apportionment
The population of the United States is recorded every ten years through what is known as a census.  During a census, hundreds of volunteers and paid individuals working for the Census Bureau canvas the nation to find out who lives where. This provides each state the knowledge of who lives in which congressional districts.  Representation in the U.S. House of Representatives and the state legislatures is decided through population.  The drawing of district boundaries is also influenced by population in a specific area.
Each state legislature divides its state into many election districts. Generally, one set of districts is laid out for senators and another for representatives. For many years, senate districts were based roughly on land area, and house districts were apportioned, or divided into districts, based on population. Area-based districts often produced malapportionment, or unequal representation, in many state legislatures. A city district and a rural district might each have had one senator, even though the city district had 10 times the people. This happened because as the population grew, especially in cities and suburbs, powerful rural senators refused to allow districts to be redrawn more fairly.
This situation began to be corrected in 1962 after the U.S. Supreme Court ruled in Baker v. Carr that federal courts could hear suits to force state authorities to redraw electoral districts. Then in 1964, in Reynolds v. Sims,  the Court held that both chambers of state legislatures must be apportioned on the basis of equal population. In the language of the Court, the districts must be redrawn on the principle of “one man, one vote.” As a result, many states had to change the apportionment of their legislatures.
Problems Facing States
Americans have begun to expect more and more from their state governments. As Americans, we want better public transportation, better schools, and better services for people who are disabled or disadvantaged. They also expect state governments to protect the environment, regulate business, and reduce crime and drug abuse.
State governments are finding it difficult if not impossible to pay for these services. Many legislators refuse to vote to raise taxes because such a vote may harm them in reelections. Also, whereas federal grants paid for many of these services in the past, the federal government has eliminated many of these grants because of its own budget concerns.
As a result of this, state legislators are faced with a difficult choice: Should they cut state programs or raise taxes to pay for them? Legislators fear they may be defeated in the next election if they raise taxes. They also do not wish to cut essential services. Cutting services may be felt by legislators and voters alike to be unwise and irresponsible if it is a time when crime, homelessness, and pollution are rising.  The Supreme Court’s “one man, one vote” rule also increased the representation of city dwellers in state legislatures. Since cities are where crime, drug abuse, and unemployment may be seen as the highest, today’s state legislators face tremendous pressure in dealing with these issues. 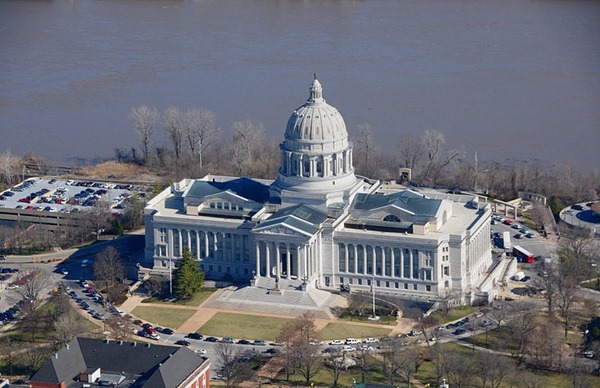