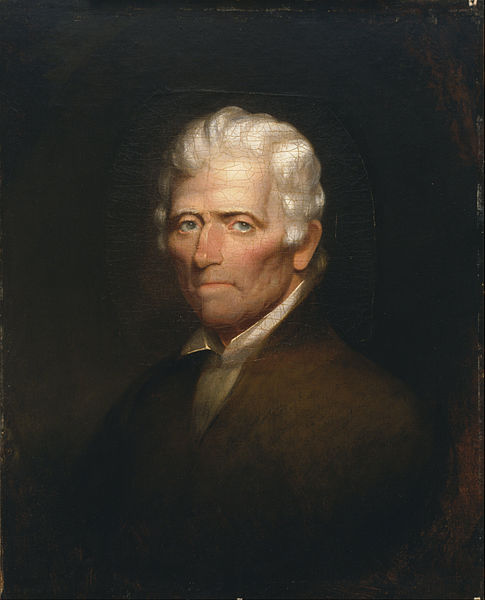 While the Louisiana area had initially been associated with Spanish possession, much of settling of the region was accomplished under the guise of the French as part of New France.  France controlled the land from 1699 until 1762.  When France lost the French and Indian War, the land west of the Mississippi went to Spanish rule.  Ironically, France would regain possession of this land in 1800 only to sell it to the United States in 1803.

Although the land was under the authority of France, then Spain, and finally France again, there were Americans who crossed the river and settled in the land that would make up Missouri.  Some of these Americans came on their own, others were invited westward by the Spanish to help settle the land.  One of these people came from Kentucky.  His name was Daniel Boone.

Daniel Boone was born in Pennsylvania in 1734.  His formal education was minimal (taught to read and write from his mother, or possibly his older brother’s wife), but his knowledge of the outdoors was paramount.  This knowledge benefited Boone in serving the British in the French and Indian War.  He served Major General Edward Braddock as a British military leader sought to capture Fort Duquesne from the French.  A young Virginian officer by the name of George Washington also fought in this debacle.  Braddock’s men were ambushed by the French and failed to capture the site.  Washington remained in direct service to Braddock, but Boone was in a part of the battle that led him to flee in the only attempt capable of saving his own life.

Boone heard from another soldier about a wilderness south of the Ohio where deer, buffalo, bear, and turkey were in abundance.  The Native Americans called this land “Kentucke.”  These stories of adventure and excitement intrigued Boone.  Boone explored the land in 1771, settling in Kentucky in 1775.  Kentucky was rugged and dangerous for Boone.  Several bouts of fighting occurred over the years involving the Shawnee, Cherokee, and other Native American tribes in the area.  Boone’s daughter, Jemima, was captured by Shawnee, only to be rescued by Boone and his men.  This event was inspiration for James Fenimore Cooper’s “The Last of the Mohicans.”  Not long after that, Boone himself was captured by Shawnee only to be adopted by the tribe.  Eventually he would spend time hunting with these Shawnee, not something you would expect from someone portrayed by the media of the day as an Indian hunter and anti-Native American.  The “founding father of westward expansion” was actually very accepting on Native Americans.

Boone struggled financially during his time in Kentucky and basically lost all of his land because of errors in registration.  This would lead the man westward into Louisiana in 1799.  The Spanish government invited him, and others, into the area now Missouri.  He would settle in an area that is part of St. Charles County today.  He was granted an area of 850 acres in the Femme Osage District and declared “syndic” or judge and jury for the area for the Spanish government.  Since he was more comfortable outdoors, he would often “hold court” under a large tree on his son Nathan’s land.  This tree was known as the “Judgment Tree.”  When the Americans gained possession of the land with the purchase of the Louisiana Territory, Boones claim to ownership of the land came into question.  The Americans did not honor the deeds granted by the Spanish during their time of rule.  Eventually, Boone did get his land granted, but he had little money left.  Boone volunteered to serve in the military during the War of 1812, but his 78 years of age prevented his request.  He continued to hunt and travel into his 80’s, traveling as far as Yellowstone. He had once made his own coffin, keeping it under his bed.  It was in this coffin that Boone was buried in Defiance, Missouri at the age of 85.  He died in 1820 at his son’s home in that town.  His reputation and legend continued to shine even today.   His exploration and independent spirit has led to his being called the “Columbus of the woods.”

In March 1804, the American flag flew over St. Louis for the first time.  President Thomas Jefferson had purchased the parcel of land from the French government with hopes of providing more space for American citizens.  He had assigned the mission of exploring the land and trying to find a “northwest passage,” or direct water route to the Pacific, through the land to his secretary, Meriwether Lewis.  Meriwether Lewis and William Clark began preparation for their journey up the Missouri River before the Louisiana Purchase was finalized.  They were present to see the raising of the American flag on that March day.

The “Voyage of Discovery,” as the Lewis and Clark Expedition was formerly called, consisted of the two leaders and 43 other men.  They set forth from St. Charles on May 21, 1804.  Can you imagine going on a journey into an area that you had little, if any, information about?  They knew that it would take them considerable time to make the journey, that there were Native Americans both friendly and hostile they would meet, and mountains to cross.  Other than that, they had little knowledge about what lay in store for them.

The group traveled up the Missouri River and had to push against the current with long poles most of the time.  There were times that the boats had to be pulled by rope with men walking along the banks of the river.  Much to their frustration, they would reach the source of the Missouri in Montana, learning that it did not flow all the way to the Pacific.  They would continue on their journey anyway, traveling west along the Columbia River.  They would not reach the Pacific Ocean until November of 1805.  Lewis and Clark would separate for the return journey, hoping one of them would find a shorter route back through the Rocky Mountains.  They would join together again in what is now North Dakota and continue on their journey back to St. Louis.  September 23, 1806 marked the return of the explorers to a rage of fanfare.  Some didn’t expect them back because of the length of time it took.  The people were surprised to see Lewis and Clark return successful.

Both Lewis and Clark would compile important roles in the development of Missouri following the expedition.  Lewis would be made the territorial governor of Missouri by Jefferson.  Clark would become the leader of Missouri’s militia and chief Indian agent.  Clark was compassionate to the Native Americans in the area and they held him with great respect.  He would later become a governor of the territory in his own right and hold that title until Missouri became a state in 1821.  Clark would live the remainder of his life in the St. Louis area.  Several times Clark would be instrumental in the treaties between the United States and various Native American tribes.

The first territorial governor of the area, James Wilkinson, gave Zebulon Pike the order to find the headwaters of the Mississippi River while Lewis and Clark were in the west.  Pike thought he found the source of the river, but was mistaken.  He reached Leech Lake then returned to St. Louis in 1806.  Wilkinson wasn’t done with Pike and sent him west to explore the Red and Arkansas Rivers.   Since the Spanish had such a lucrative trade system in the Southwest, Wilkinson hoped that Pike could learn valuable information about it.

Pike’s second journey began on the Osage River.  With a crew of 72 (twice the amount of Osage Indians to those that were white), Pike would document substantially the findings of his journey.  Pike was astounded by the beauty they encountered and the abundance of game.  Pike would reach the mountain in Colorado that was named for him but soon be arrested by the Spanish.  The Spanish didn’t want Americans to enter into their land and Pike was violating that law.  He wasn’t abused by the Spanish authorities while incarcerated.  Instead, they let him return to Missouri and tell his accounts of the expedition.  When Pike got back to Missouri, he learned that Wilkinson was no longer the governor, but that Meriwether Lewis was the new governor.  Pike’s information about the land, the Spanish trade and it’s base of Santa Fe became quite useful for American businesses looking to trade in that area.

The journeys of Lewis and Clark and Zebulon Pike provide beneficial information about the lands west of the inhabited Missouri region.  They became the heroes of western exploration, influencing the concepts of “Manifest Destiny,” a belief that God had ordained them to spread westward and create a nation that stretched from the Atlantic to the Pacific Ocean.  This belief would end up causing much strife for the Native Americans living in these areas, but it did make the United States the nation that it is today.  Without these expeditions, people such as Laclede and Chouteau would not have been able to build the empire that was theirs in trading.

Austin came to Missouri from Virginia in 1797.  The rich l Ste. Genevieve drew him to ask the Spanish governor for a grant of a land.  A depression in 1819 wiped out the savings that Austin held in the Bank of St. Louis.  He made a trip to San Antonio to discuss the possibility of a large Missouri expedition.  Austin convinced the Spanish governor to let the Missourians enter the area.  Austin would die when he came back to Potosi, Missouri as the result of injuries he sustained on his return from Texas.  He would die only three months after getting back.  It would be his son, Stephen, who gained the task of carrying out Moses’ plans to settle Texas.  Stephen would go on to become the Father of Texas and have the state’s capital named in his honor.

Kit Carson made a name for himself during the Mexican War but had first come to Missouri at the age of two.  Like Daniel Boone, whose granddaughter married Carson’s older brother, Kit was an adventurous soul.  He learned the languages and customs of friendly Native Americans.  He wanted to travel and explore other areas.  This adventurous spirit would lead to Carson running away from home at the age of thirteen.

Carson would settle in New Mexico and get married.  When his daughter was school-aged, he returned to Missouri so that she could receive an education.  It was during this time that Carson met Lieutenant John C. Fremont.  Fremont had been given the authority to lead a major expedition of the Rocky Mountains.  Kit Carson told Fremont how he could serve as a guide for the expedition.  This would establish Carson’s association with the United States government.  That association would serve Carson as he became an army guide, Indian agent, and military leader in Indian wars.  Carson would serve in the Civil War on the Union side and continue to serve as a guide till close to his death.

Missouri had been instrumental to the creation of the nation that we know.  With the explorers mentioned in this section, we opened the doors to establish a nation spanning the east coast to the west. 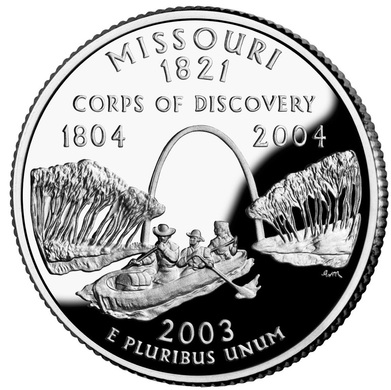