Earlier, you looked at the first highways of Missouri, the rivers.  But there is another method of transportation to cover the State of Missouri in the two decades before the Civil War.  That was the railroads.  Richard Trevithick introduced the somewhat successful effort of steam locomotives in England in 1804.  Peter Cooper’s “Tom Thumb” first traveled 13 miles in the United States in 1830.  Six years later, there was a state convention in Missouri pushing for two railroad lines to be built to run across the state.  One of these lines was to run parallel to the Missouri River.  The other was to run into the mining regions southwest of St. Louis.  Eighteen different railroad companies were incorporated in the state the following winter.  The financial struggles of the Panic of 1837 hampered most of these efforts to grow rail lines.

We see resurgence of rail interest in the mid-1840s with the General Assembly granting a charter to the Hannibal and St. Joseph Railroad in 1847.  Just because a charter was granted didn’t mean that the railway began.  There were several delays that didn’t bring construction on that line until 1853.  The first railroad track in the state was a five-mile stretch between Richmond and Lexington along the Missouri River somewhere between 1849 and 1851.  It didn’t look like anything we might be familiar with; it was made out of wood, the rails being sawed oak and the cross ties hewed oak.  It cost $1,500.00 per mile to build and was operated by horse power. 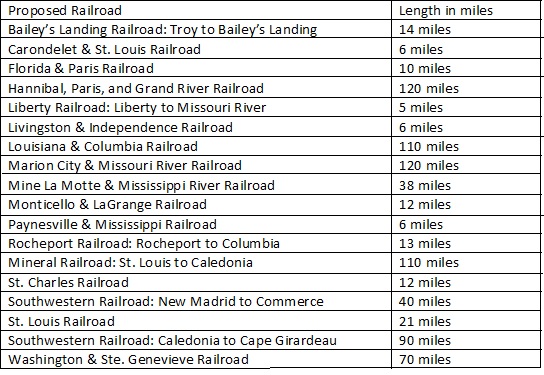 Of the eighteen original chartered railroads, none ever saw construction.  There was not enough money in the state to build even one.  All but four of the proposed routes were less than one hundred miles, twelve were under fifty miles in length.  Five of these routes did not even surpass ten miles.  There was a predominance of emphasis on freight lines during this time as opposed to passenger lines. 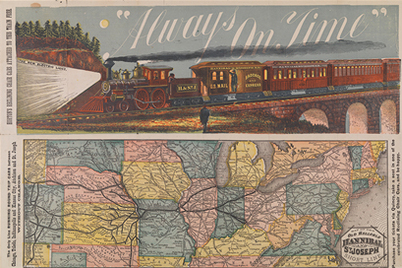 The Hannibal and St. Joseph Railroad served as a blessing to northern Missouri.  It would not be until 1859 before the line was finished.  There was a substantial amount of state and federal funds contributing to this railroad’s construction.  That amount was in the figure of $3 million through all of the land grants.  St. Louis businesses were not happy with this railroad, as it offered competition and helped establish the efforts of the Chicago line to serve Missouri.  There was support from the Burlington Railroad, financially and otherwise.  This connection allowed the Hannibal & St. Joseph to provide a cutoff for Missouri River traffic across the northern part of the state and into Chicago.  It provided a more reliable all-weather route for the traders of the upper Missouri Valley than the route to St. Louis via the Missouri River, which was frequently plagued by ice in winter and shallows at other times of the year. 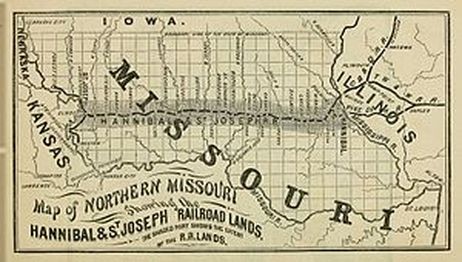 The Hannibal & St. Joseph was the first railroad to have a dedicated car for postal work.
St. Louis held a national railroad convention in 1849, attracting 900 delegates, half of them were from this state.  This influenced the incorporation of the Pacific Railroad (which will be the Missouri Pacific Railroad) to link St. Louis with the western border and perhaps eventually with the Pacific coast. 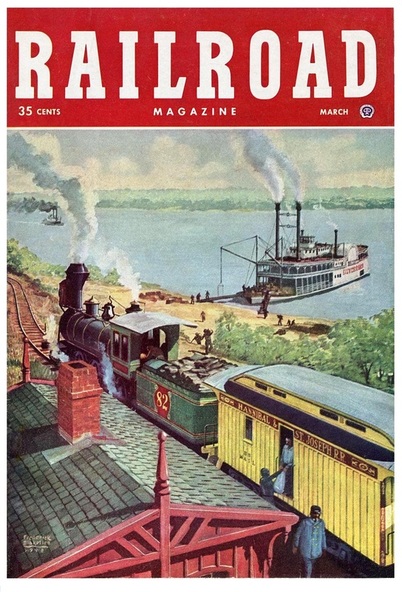 The Hannibal & St. Joseph was the first railroad to have a dedicated car for postal work. 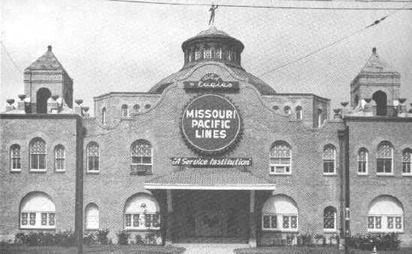 The start of iron railroad construction in the state was in 1851.  It was at this time that construction began on the Missouri Pacific Railroad.  Known as the “First Railroad in the West,” the route is more commonly referred to as MoPac.  Towns throughout the Midwest and Southwest would grow around the MoPac’s junction stops.  The line would continue to grow and spread until it was eventually categorized as a Class I large freight railroad.  The ground breaking celebration was held on July 4, 1851.  It reached Jefferson City by 1855, but would not reach beyond Sedalia by the time the Civil War broke out.  The Pacific, as it was known then, was the scene of Missouri’s first major rail tragedy. 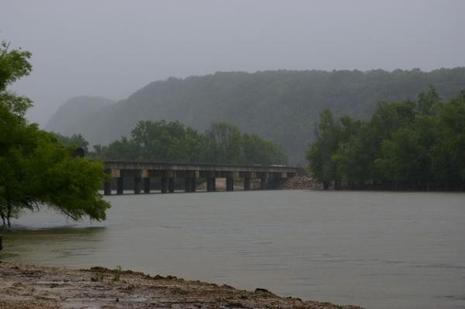 This bridge over the Gasconade River was built upon the original piers of the bridge that failed in the November 1855 tragedy.
The rail company set out to celebrate reaching the State Capitol.  They planned a great party, inviting St. Louis citizens to take an overnight trip to Jefferson City in November 1855.  This eleven-car excursion train was crossing a newly constructed bridge over the Gasconade River when the bridge collapsed.  Ten cars plunged into the river and thirty-one people were killed with many more injured.  The disaster renewed public criticism over the safety of the new transportation, but didn’t stop railroad construction. 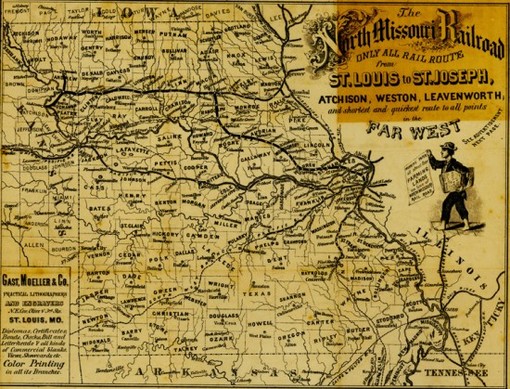 Track was laid during the 1850s by three other railroads.  They received state funding not unlike that granted to the Hannibal and St. Joseph.  The North Missouri Railroad was designed to link St. Charles through the north central part of the state with the Iowa border.  The north branch of this railroad would travel through Kirksville to the Iowa border.  The route would reach Macon by 1860, but further construction would be halted until after the Civil War ended.  By the end of the 1870s the North Missouri would be part of the Wabash system.  The St. Louis and Iron Mountain Railroad stretched southwest from the river city to Pilot Knob to serve the mining region.  The Southwest Branch of the Pacific Railroad was designed to ultimately link Springfield and southwest Missouri with St. Louis.  It tied in with the main line at Pacific Junction, thirty-seven miles west of St. Louis.  This route would trek as far as Rolla by the time the Civil War began.  It would still fall short of its destination of the Queen city of the Ozarks, Springfield.  Following the war, it would end up being the Southwest Pacific and finally the South Pacific.  Other than the Hannibal and St. Joseph, none of the rail lines in the state would see completion before the nation plunged into those blood-soaked years of the 1860s. 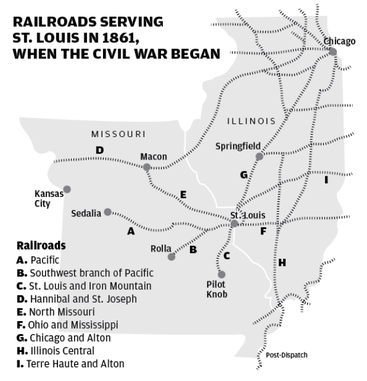 The importance of the rail lines was not ignored by the militant forces filling the state.  Control of these routes could provide the ability to transport troops, arsenal, and supplies to destinations throughout the land.  If your forces held control of the rails you could prevent your opponent from gaining a foothold.  The destruction of these routes could keep that from happening even further.  General Sterling Price would destroy part of the Pacific Railroad line in 1864. Still, this route would eventually be complete in reaching Kansas City on September 20, 1865.  The North Missouri Railroad was a military objective for both the Union and Confederate armies.  During the summer of 1861, the Confederacy completely destroyed every bridge and culvert over the North Missouri Railroad.  Extensive damage was done to stations, cars and engines.  Marauders tore up rails, destroyed ties and burned fuel supplies.  More than 120 men who attempted to stop the Confederates were killed and buried along the railroad’s right-of way near Centralia.
After the Civil War, railroads became the best way to travel and transport goods.  They replaced steamboats as the most important form of transportation in Missouri.  The railroads would be instrumental in the growth of St. Louis, Kansas City, St. Joseph, Sedalia, Springfield, and Joplin.
Ozark railroads helped the lumber industry as many counties in that region were home to sawmills.  Many people came to the Ozarks to cut timber and to work in these sawmills.  Their produce provided wooden ties to hold rails in place and lumber necessary for new buildings.  The railroads gave ease in transporting wood products to where they were needed.  The mining industry also benefited from the railroads.  The transport of lead, zinc, and coal by rail allowed these industries to thrive. 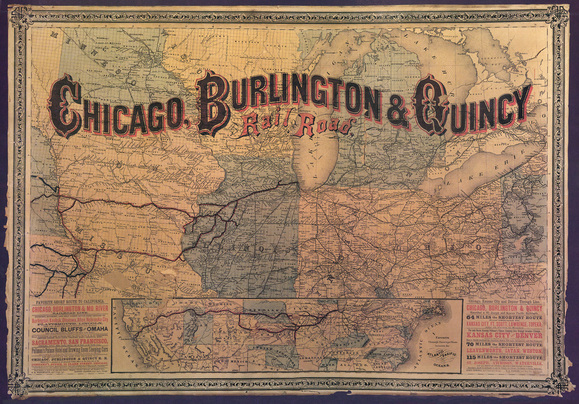 Two lines that would gain importance in the latter part of the 19th century were the Chicago, Burlington & Quincy (CB&Q) and the Missouri, Kansas, & Texas Railroad (Katy Line).  Later, we would see the Atchison, Topeka, and Santa Fe (ATSF) and Burlington Northern (BN) come about and eventually merge as the Burlington Northern & Santa Fe (BNSF).  Many of the lines of Northern Missouri would be absorbed by the CB&Q and then the Wabash Line.  The Katy Line ran through central Missouri and would be the first railroad to enter Texas from the north.
Railroad construction was expensive.  Crossing rivers caused railroad builders trouble.  Engineers developed new and better ways to build bridges across the state’s biggest rivers.  Some doubted the ability of building bridges across the Missouri and the Mississippi Rivers.  One man who did not doubt was St. Louisan James B. Eads.  Eads had a long association with the rivers.  He had invented a diving bell in the 1840s and 1850s to walk the bottom of the Mississippi and help his salvage business.  He designed ironclad ships in the Civil War.  After the war he got the approval to build a bridge across the Mississippi at St. Louis.  This bridge had three arched spanning the river.  Eads used steel to give strength to his bridge.  His steel trusses gave the bridge durability to carry the weights to and from.  It was a two-level structure, giving trains the lower deck and carriages and passengers crossed on the upper level.  This was the only bridge Eads would build and he would just take a crack at it.  Many would marvel at the Eads Bridge and its beauty and mastery.  It remains one of St. Louis’ great tourist attractions. 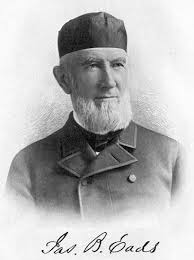 The Iowa and St. Louis Railroad was formed in 1901 to run from Centerville, IA to St. Louis.  Its main purpose was to haul coal from the Chariton River Valley.  It also hauled timber, general freight and passengers.  One of the main facilities was at Novinger, where the railroad crossed the Quincy, Omaha, and Kansas City Railroad.  There was a large yard for handling freight cars.  Several steam locomotives were stationed at Novinger and switching duties were dealt with between the two railroads.  While there was a roundhouse and locomotive shop at Novinger, most of the heavy maintenance happened at Milan.  The railroad was bought by the QO&KC and finally merged into the CB&Q. 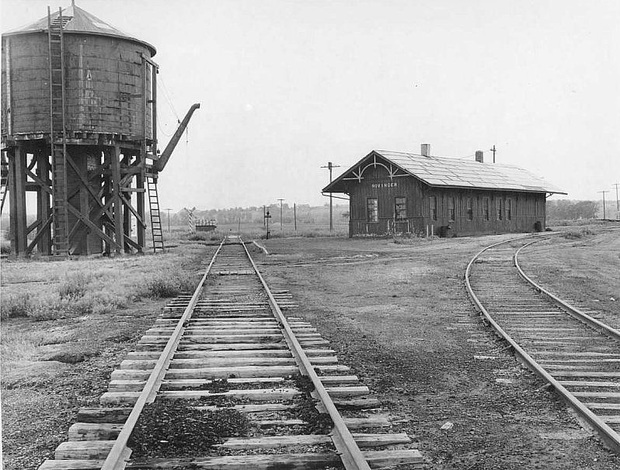