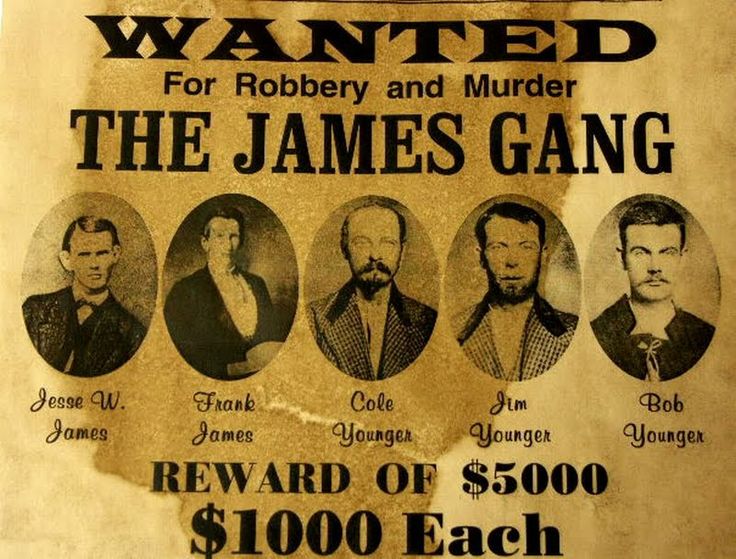 The end of the Civil War left many people on the wrong side of the law.  Men who traveled with Quantrill, Anderson, and other rebel guerrillas struggled with accepting the entire reconstruction concepts that were going through the nation.  Even though the war had ended, these people could not see letting African Americans have the complete rights that white Americans enjoyed.  So many took to staying with a renegade mindset and harassing the countryside.  Most of the bushwhackers returned to their homes and resumed life as they knew before to the war.  But there were those like Frank and Jesse James content with roaming the land and robbing and stealing.  Others would become outlaws because of the events they encountered in life.

Jesse Woodson James was born to Zerelda and Robert James on September 5, 1847.  Robert was a minister and slave owner.  When the California Gold Rush was in full bloom at the end of the 1840s, Robert felt compelled to go to California to “minister” and leave his family behind in Missouri.  The man left Zerelda and the children in Missouri and went to California when Jesse was only three.  Robert never came back to Missouri, dying in a gold mining camp in 1850.  Zerelda and the boys had to maintain their farm, growing hemp and raising sheep.

Zee, as she was called, knew that it would be difficult for her boys if there was no man in their lives.  She remarried to a Benjamin Simms and then Reuben Samuel.  Samuel was a doctor.  Zee was a tough lady, strongwilled, opinionated, and harsh.  She held fast to the beliefs of the south when it came to blacks.  Her boys joined her in her opinions.  While some thought that the popular Jesse would follow in his father’s footsteps as a minister, his path would be one of danger and lawlessness.

Jesse saw his older brother, Frank; join the ranks of Governor Claiborne Fox Jackson’s confederate militia.  Frank fought at Wilson Creek and would eventually join up with Quantrill and his guerrillas.  In 1863 the Union soldiery came to the James farm with hopes of gaining information about the Confederate guerrillas.  They were harsh with the James family, leading Jesse to join Frank and the guerrillas with Bloody Bill Anderson.  Jesse was just a teen and the situation would undoubtedly fashion his impressionable mind.

Jesse was shot in the chest during the summer of 1864.  That didn’t stop him from being involved in the raid on Centralia by Anderson on September 27, 1864.  The seventeen-year-old James would take credit for the killing of Major A.V.E. Johnston, the Union commander of the 39th Missouri Volunteers who came to Centralia to stop the guerrillas.

Jesse James would attempt to surrender at the end of the war, only to be shot by Union cavalrymen.  He would be cared for by a cousin, Zerelda Mimms.  Zee nursed Jesse back to health and he would in turn marry her.  Jesse would get a late start at being an outlaw as compared to other from his bushwhacker days, but he would make up for it.
The Clay County Savings Bank in Liberty, Missouri was robbed on February 13, 1866.
An innocent   bystander would be shot in the melee.  Jesse, Frank, and eight others were believed to be the criminals involved.  Bank robbing would become a specialty of the James gang, A Kentucky bank would be victim of the gang in 1868 and the Daviess County Savings Bank in Gallatin also had the misfortune of being a target of the gang.  The cashier of the bank would be shot because Jesse thought he had shot Bloody Bill Anderson following the Centralia Massacre.

Jesse James became an attention hog, craving news coverage and the public’s attention.  He was seen as a Robin Hood type of figure by some of the newspaper writers.

Frank and Jesse James would unite with the Younger brothers, Cole,  Bob, John, and Jim.  Law enforcement officers would be tracking the James Gang from 1871 through 1875 when they threw a flare into Zerelda Samuel’s home, causing the death of Jesse’s half-brother and injuring Zerelda’s hand to the point it had to be amputated.

September 1876 found the James-Younger gang in Northfield, Minnesota.  Their goal was to rob the bank but the Youngers were caught and sent to prison.  Jesse and Frank would get away and settle in Nashville under aliases.  It was here that Jesse would begin using the alias of Thomas Howard.

The Governor of Missouri, Thomas T. Crittenden would issue a proclamation for the arrest of Frank and Jesse in 1881.  The James brothers would relocate to St. Joseph by the next year.  A new pair of brothers would join the Jameses, Bob and Charley Ford.  Unaware to Jesse, Bob Ford had been in discussion with Crittenden about a reward for the capture or killing of Jesse James.

April 3, 1882 would find the James and the Fords in the rented house of Jesse James.  Jesse would get up to fix a crooked wall hanging, a crossstitch of the phrase “God Bless Our Home.”  Unarmed and with his back to the rest in the room, Jesse was an easy target for what would come.  Bob Ford shot and killed Jesse James with a shot from behind.  The Ford brothers were tried for the murder and found guilty. Before they would be sentenced, Governor Crittenden pardoned the two.

Jesse James robbed and murdered people in a half-dozen states for a period of sixteen years.  While he may have been seen by some as a Robin Hood type of individual, he was a ruthless murderer, lacking any compassion for those he killed.  His death brought relief to the people of Missouri. 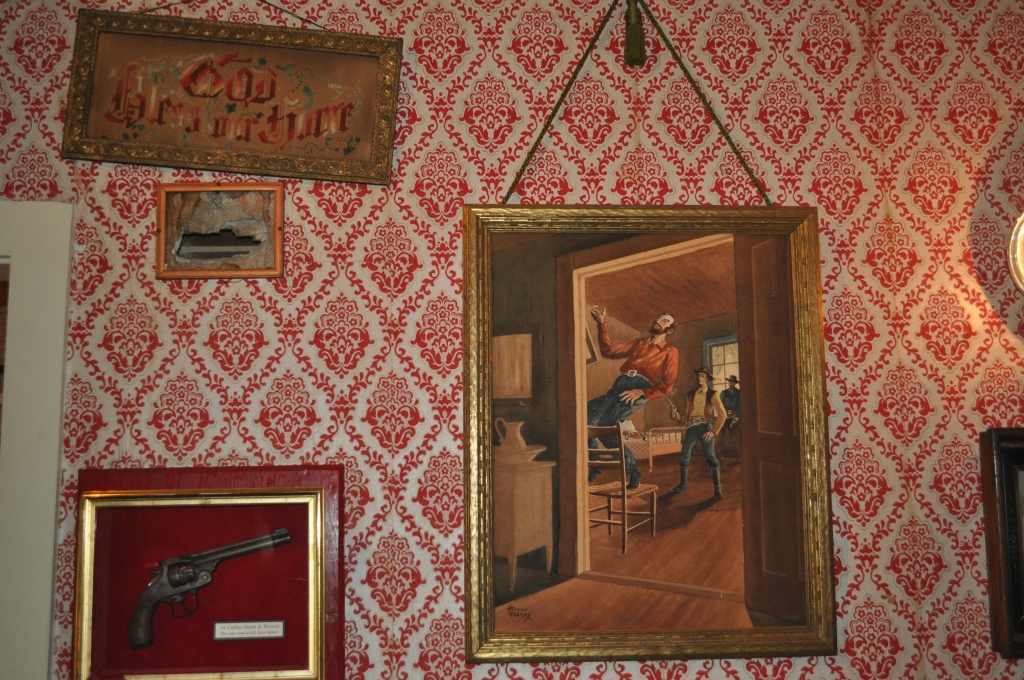 On the wall in the St. Joseph home of Jesse James is the still-crooked wall hanging of "God Bless Our Home" that Jesse James went to straighten when Bob Ford shot him dead.  The gun used by Ford is displayed below the cross-stitch. 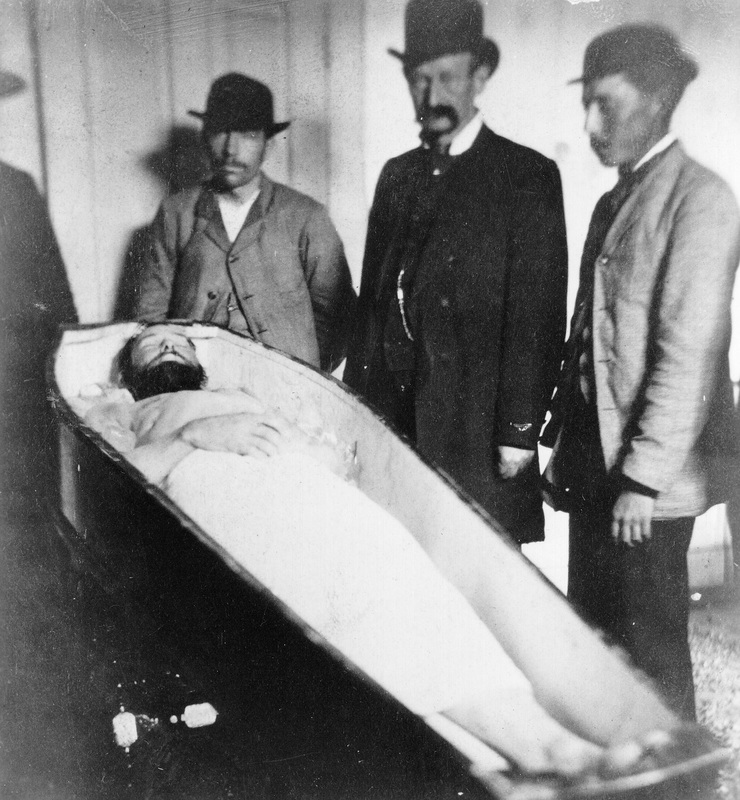 The dead body of Jesse James on display after being shot by Bob Ford.
Powered by