The 2016 Presidential race has been nothing but interesting with a multitude of different candidates from the beginning.  Republican candidates have engaged continually if bashing the Democratic candidates and their fellow Republicans.  Ironically, as one candidate falls away from the race they turn around in support of the party’s front runner. They had been at odds while the former candidate was still in the race, but ultimately they “hold the party line.” That means they stand behind the direction their political party is headed, no matter the differences in opinions. They present the concept of “party first, candidate second.”  This has been more prevalent in this election with the Democratic Party, even though there are differences in views between the two main candidates.  Perhaps Democrats are more comfortable and have more experience in holding the party line.  It was evident when Harry Truman urged Eisenhower to run with him on the Democratic ticket in 1948. Ike declined and would run as a Republican presidential candidate in 1952.  Harry supported his party instead of his old friend. 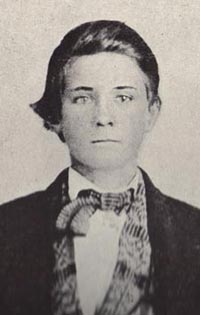 James Beauchamp Clark was born in Kentucky in 1850.   His grandfather on the Clark side was a man of great wealth, the owner of many seagoing vessels (4).  With the death of this man, his ships and his wealth were basically lost.  John Hampton Clark, the father of Champ Clark, would end up working hard wagon maker and dentist to make a living for his family.  Perhaps it was the stories of ancestors that added to Champ's desire to succeed in life.  As a young child, Clark would read books that spurred the desire to a lawyer and politician.  He attended college in Kentucky and graduated from Bethany College in West Virginia in 1873.  He would be elected president of Marshall College a very short time afterward, giving him the distinction of being the youngest college president in the history of the United States (2).  The salary from Marshall would be used by Clark to enroll at the Cincinnati School of Law. It was while Clark was studying law that he settled on the nickname of “Champ,” short for Beauchamp and very eye catching and easily remembered (3).  It is by that name of Champ Clark that Missourians would come to know this man.

Champ started out to make his fortune as a lawyer in Kansas but it didn’t happen.  He would accept the job of Assistant Superintendent of Schools at Louisiana, Missouri.  Although he held that job for only one year, it would be the door to a long and lustrous residency in Missouri.  He would begin practicing law in Louisiana, Missouri, and then be elected the city attorney in 1877.  His first brush with larger politics was when he lost his first campaign for the state legislature in 1878.  It is by this time that Champ had securely attached himself to Democratic politics, joining the Missouri Democratic Party in 1876.
Champ continued to hold various city and county positions, elected as the Bowling Green city attorney in 1880, then the Assistant and Prosecuting Attorney respectively for Pike County, Missouri.  Love would beckon Champ at this time in the guise of Genevieve Bennett.  The two would marry in December 1881. 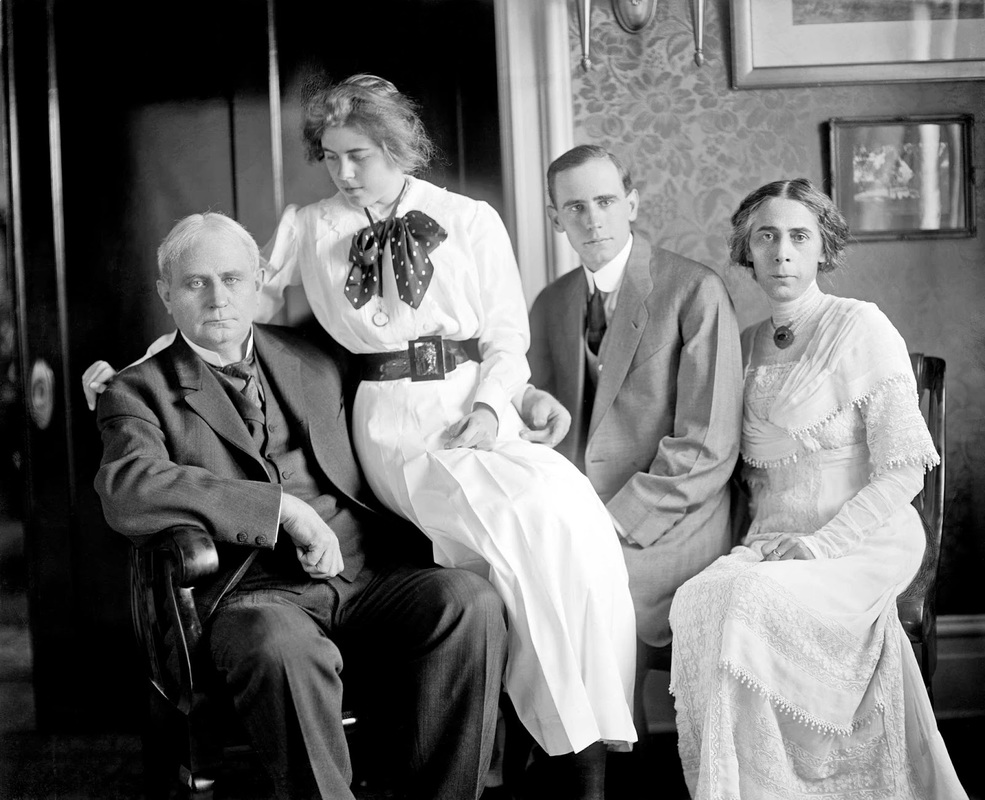 That 1878 campaign for the state legislature remained integral to the future of Champ Clark.  He would run again and be elected to the general assembly in 1888.  Perhaps this victory pumped up Clark’s ego, because he would try unsuccessfully for the U.S. House of Representatives in 1890.  Like that initial state legislature loss, this 1890 campaign would inflame his desire to run again.  His first successful race for the Congress would be 1892 followed by a loss in 1894.  Clark would be back in the House of Representatives in 1896, a role that he would maintain until his death in 1921.
Champ Clark’s speaking ability was as big as his ambitions.  He was a colorful, dramatic and entertaining speaker.  The Louisiana Journal wrote that Clark “takes a five-gallon inspiration and belches forth his pent-up effervescence…The audience likes it.”  His oratory would serve him well in local, state, and national politics. 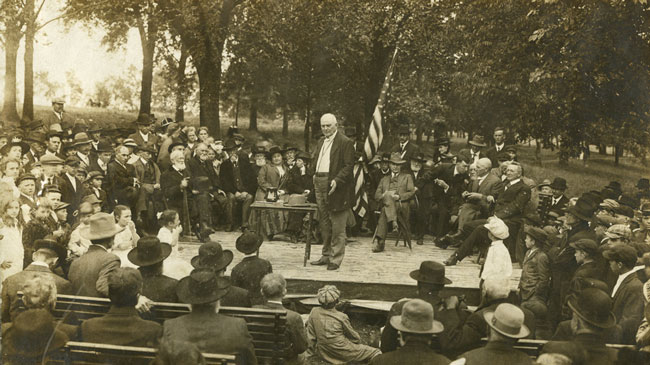 Champ Clark served as the Speaker of the House from 1911-1919, and was the Minority Leader the two terms before and the one following that time.  His party loyalty served him well as Speaker of the House.  His popularity led him to run as an early Democratic Presidential candidate in 1912.  Clark held a strong majority as the Democratic convention pressed on.  But the switch midway of William Jennings Bryan to support Woodrow Wilson pushed the New Jersey Governor into the nomination for president.  Champ Clark was crushed to think he had been so close and lost.  Some say that he held Bryan responsible for his loss.  Yet he remained faithful to the Democratic Party, campaigned in Missouri for Wilson, and helped to get Wilson’s “New Freedom” agenda passed once Wilson became president.
Champ Clark was a Democrat in the fashion of Thomas Jefferson, describing the people in 1881 as Jefferson would have, “in the aggregate, humanity is good, noble, honest and patriotic.”  He was a progressive conservative, supporting the direct election of senators, the elimination of the electoral college, and women’s suffrage.  He was a friend of the farmer, supporting agrarian interests over corporate interests. Champ supported the establishment of an income tax, yet opposed the Federal Reserve Act, leading to Missouri being the only state to be granted two Federal Reserve Banks.  Perhaps the only real time that he struggled with the “party line” was when he opposed President Wilson’s decision to bring the United States into World War One. 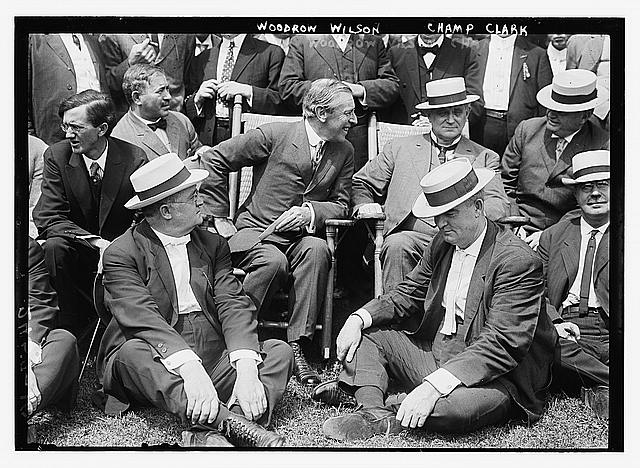 A major shift toward a Republican landslide in 1920 brought the last political loss to Champ Clark.  Perhaps the citizens felt it was simply time to put new “blood” into Congress, as Republican Theodore W. Hukriede was a newcomer to politics.  But perhaps the greatest defeat was a few months earlier when his daughter’s son, Champ Clark Thomson, died of pneumonia.  The loss of the grandchild seemed to break the gentleman’s spirit.  Just one day short of leaving office in March 1921, Champ Clark  died in Washington,  but his influence would continue in Congress for years to come. 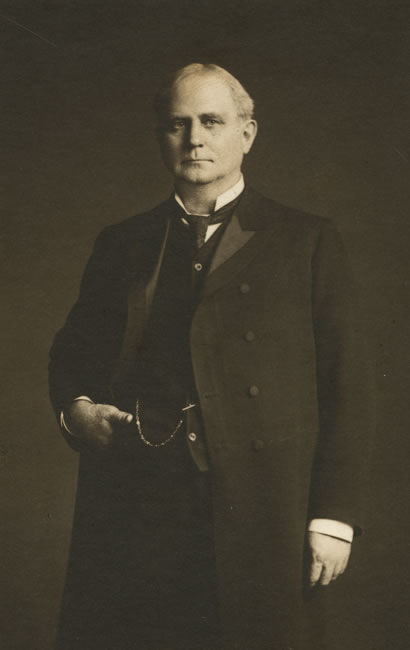 A young Elsberry man, by the name of Clarence Cannon would be called on by Clark in 1911 to serve as his confidential secretary. Clark would serve as a mentor to Cannon and treat him as family.  Cannon would campaign in 1922 for the representative seat that have been his mentor’s for many years.  Cannon’s belief in and support of Missouri farmers won him that election and he would remain in Congress until his death in 1964. Champ Clark’s son, Joel Bennett Clark would serve as a Democratic U.S. Senator from Missouri from 1933 to 1945 and later as a U.S. federal judge.  The man who claimed Missouri as his home and the Democratic Party as his politics, James Beauchamp Clark, a man who nearly became president, made a major impact on the governing of Missouri and the nation.
Sources used:
Parrish, William E. Missouri: The Heart of the Nation. (1992) Wheeling, Illinois: Harlan Davidson, Inc.
https://en.m.wikipedia.org/wiki/Champ_Clark