“Creating and Ratifying the Constitution”

The delegates of the Constitutional Convention felt their mission was to create a framework of government that all the states could find acceptable.  They didn’t want to leave without completing this task.  Unfortunately, not all the states had the same directions to get this done.

Virginia delegates already had a plan to propose before the convention even began.  It was formed by James Madison and came to be known as the “Virginia Plan.”  The Virginia Plan contrasted the Articles of Confederation structure of only having a legislative branch with a unicameral Congress.  The Virginia Plan proposed a bicameral, two-house legislature represented on the basis of population to make the laws.  It also proposed an executive branch to carry out the laws and a judicial branch, or system of courts, to interpret and apply the laws.  This three branched government differed greatly from the existing Articles of Confederation government.    The Virginia Plan had the support of delegates from Massachusetts, Pennsylvania, and New York.  These larger states liked the idea that they would have more votes in Congress, thereby giving them more influence than the smaller states. 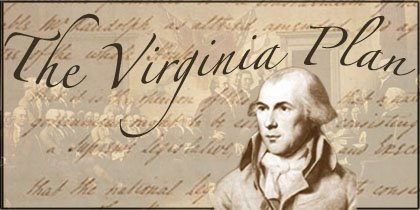 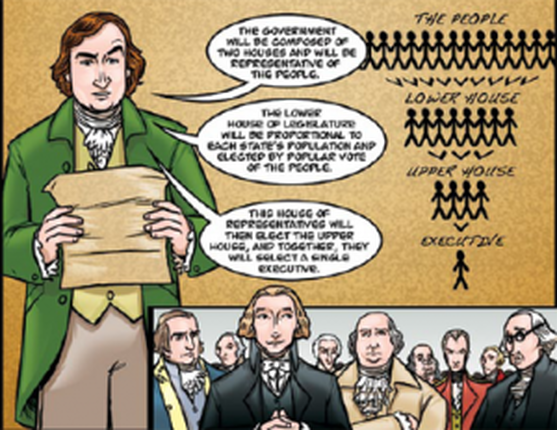 Naturally, this didn’t set well with smaller states, such as New Jersey, Delaware, and Maryland.  There was two weeks of heated discussion before William Paterson, a delegate from New Jersey, presented the proposal of the “New Jersey Plan.”  Like the Virginia Plan, it called for three branches of government.  Unlike the Virginia Plan, it’s proposed legislature would have only one house and each state received only one vote.  This plan gave the small states equal power to the larger states.  Virginia and the other large states were against this idea, because they felt they should have more power than the smaller states since they had larger populations.  Once again, more heated discussion occurred.  This discussion continued for six weeks with neither side giving any compromise.  They couldn’t see eye-to-eye but they did not want to give up without making a new constitution. 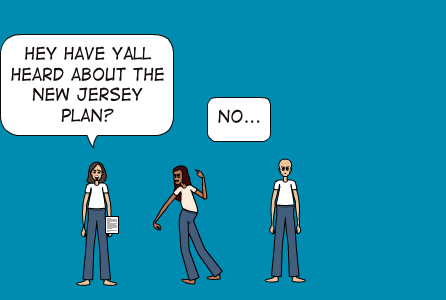 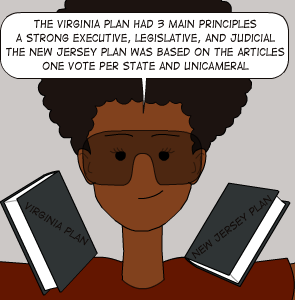 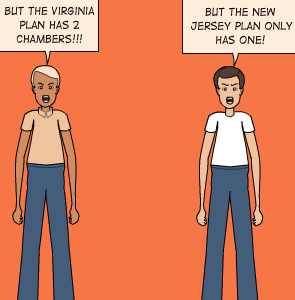 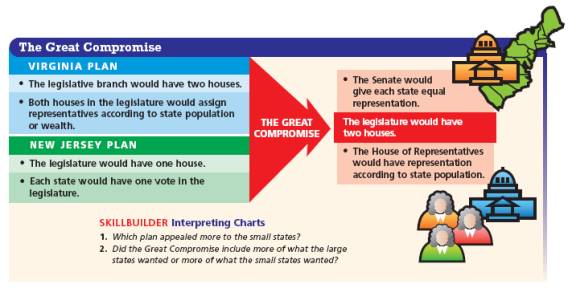 Roger Sherman of Connecticut was responsible for a committee to develop a solution.  The proposal they made had a bicameral Congress, with a Senate and a House of Representatives.  They incorporated what was liked about the legislature in both the Virginia and New Jersey plans, the Senate would be the Upper House with equal representation from each state, while the House of Representatives would be the Lower House with representation based on population.  It took a while, but the delegates accepted Sherman’s plan.  It wasn’t unanimous, but it was a majority willing to live with the compromise.  That is how this proposal came to be known as the Connecticut Compromise or the Great Compromise.  Both sides were willing to give up something they wanted to come to a conclusion. 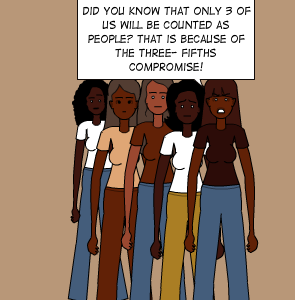 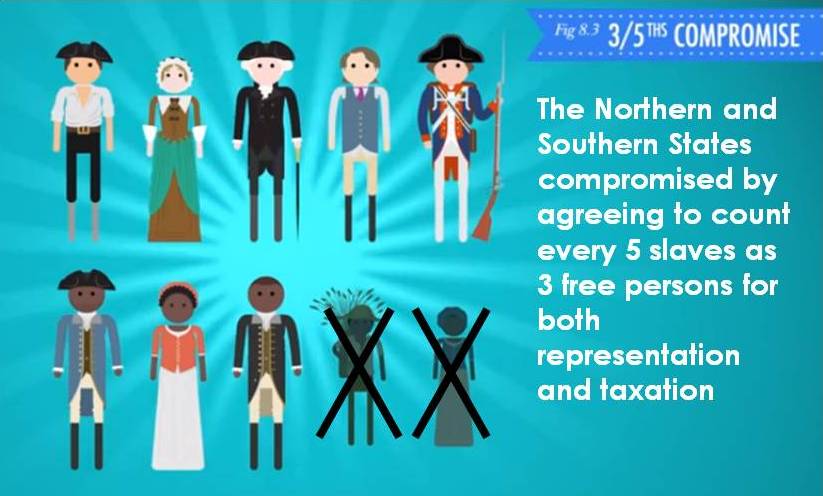 The delegates had questions over how to figure the population of a state for the purpose of representation.  550,000 African American were enslaved in the United States at the time of this meeting.  The Southern delegates wanted to count these individuals as part of their population to raise their voting power in the House of Representatives.  Since the North had a much lesser number of slaves, they were not favorable to the decision.  Their decisions were resting on the fact that those enslaved could not vote so they were not able to be considered citizens.  The group decided on the Three-Fifths Compromise, stating that a state would gain the count of three free persons for every five enslaved persons.  The same number would be used for the purpose of figuring taxes.  The Three-Fifths Compromise would be placed in writing within the Constitution, giving constitutional “support” of slavery within the United States.  Although the wording still exists in the Constitution, the Thirteenth Amendment abolished slavery in our country and made these words null and void.

These were not the only compromises present in the Constitutional convention.  The delegates compromised on trade matters as well.  The Northern states wanted Congress to regulate foreign trade and trade between the states.  The Southern states saw this as a use of power to tax exports, or goods sold to other countries.  They feared that their economy would suffer because it depended on exports of tobacco, rice, and other products.  They also feared that Congress would stop the bringing of enslaved people to the country, something that Southern plantations needed to maintain their economic position.

To make a compromise, the South accepted Congress regulating trade between the states, as well as with other countries.  In exchange, the North agreed that Congress could not tax exports or interfere with the slave trade before 1808.

How the chief executive should be chosen was another area of compromise during the convention.  Some wanted Congress to choose the president and others wanted the people to vote on the person.  They decided to have an Electoral College, a group of people who would be named by each state legislature to select the president and vice president.  Still in use today, the Electoral College would eventually be decided through the voters of each state.

After some delegates left when the summer of decisions was over, 42 gathered for one last time on September 17, 1787.  Gouverneur Morris led a committee to put their ideas in writing and sign the new Constitution.  All but three delegates signed the bottom of the document.  Now it was time to gain ratification, or the approval of the Constitution.  The Constitution needed at least 9 of the 13 states to ratify it before it became the supreme law of the land.

Those that supported the document were called Federalists.  They believed that the Constitution would create a system of federalism, or a form of government with power divided between the federal (national) government and the states.

They argued that the United States needed a strong national government to survive.  People like James Madison, Alexander Hamilton, and John Jay wrote a series of essays in the publication “The Federalist” that defended the Constitution.