The Pony Express was created on accident, due to William H. Russell, William B. Waddell and Andrew Majors. They were businessmen, owners of this freight company, and they were very interested in government mail contracts. The freight company already had mail delivered between the Missouri River and Great Salt Lake City. But it was not by horse yet, it was brought to you by a boat or a stagecoach. That was when they decided to make the Pony Express, but they only had two months.
In January 1860, the businessmen had their hands full. They sent fliers to the newspaper, which they all printed out in their weekly newspaper. One newspaper in California had an ad that read: Wanted. Young. Skinny. Wiry fellows. Not over eighteen. Must be expert riders. Willing to Risk Death Daily. Orphans Preferred. They needed faster communication because the Civil War was approaching. The Pony Express plans were mostly because of the upcoming Civil War.
Finally, the businessmen had all the riders they needed. They had over 100 stations, 400-500 horses and 80 willing riders. The estimation cost was $70,000. Three months later, on April 3, 1860, the Pony Express had its first delivery. It began in St. Joseph, Missouri, at the Pony Express eastern terminus.
There were a lot of people crowded around the sidewalks, watching as the Pony Express spread its wings. There were also dignitaries there, and there was a lot of fanfare. The mail pouch the rider had had 49 letters in it, five telegrams, and a few miscellaneous papers. It was at 7:15 a.m. when the rider took off at the sound of cannon to a waiting ferry boat. The Pony Express had a few rules that the rider had to be provided with a fresh horse every 10-15 miles and also a fresh rider every 75-100 miles.
It took 75 horses altogether to make one trip. The average speed the rider used was 10 miles per hour. At 6:45 a.m, April 9th, the first rider, who came from the east, arrived in Salt Lake City, Utah. On April 12, the mail pouch arrived in Carson City, Nevada at 2:30 p.m. The many riders went over the Sierra Nevada Mountains, on through Placerville, California, then onto Sacramento, California.
On April 14th, around midnight, the very first mail pouch was delivered by the Pony Express to San Francisco.  Throughout the Pony Express history, only one mail delivery was lost. Then, on June 1860, ten or more weeks after the Pony Express had started its famous mail run, Congress passed a bill to the Secretary of Treasury to build a transcontinental telegraph line, connecting the Missouri River and the Pacific Coast. Then came the incorporation of these telegraph companies, Overland Telegraph Company of California and Pacific Telegraph Company of Nebraska. The Pony Express still went on as the telegraph lines were being created.
Letters and newspapers were carried the long way, from the entire length of the line from St. Joseph to Sacramento.  Only telegrams were carried between the lines of the telegraph, though they were rapidly advancing. The riders kept doing their runs, delivering people’s letters, their telegrams until October 24th, 1861, when the Pacific Telegraph line was completed. The Pony Express only lasted 19 months. California had depended on the news from the Pony Express about the Civil War, but their horse line wasn’t a very good financial success. It left the owners bankrupt.
But the reason for the Pony Express made it part of a legend in the history of the American west. No such event has made the young and the old be excited about learning about the young riders and their horses. In fact, St. Joseph still celebrates the Pony Express anniversary to this day.


Enclosed below is a wordsearch on the Pony Express 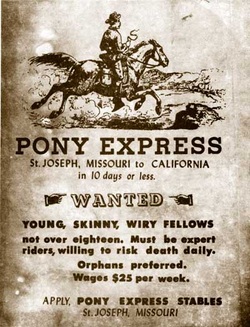