One of the key draws to Missouri for settlers was the accessibility of river travel.  With the convergence of the Missouri, Mississippi, and Ohio Rivers in the area of St. Louis, this allowed for that community to grow to the metropolitan region it is today.  The rivers were the first highways of Missouri, as they were throughout the rest of the nation.  With that demand placed upon the waterways, so came the desire to successful conquer these routes.

Lewis and Clark made their journey up the Missouri River with a keelboat and smaller pirogues.  These vehicles depended on the current of the river, wind in their sails, and human force to travel the waterways.  That great expedition of 1804 traveled up the Missouri predominantly through the energy of the men on the journey.  A great deal of the journey was spent hauling the boats upriver , lugging the weights westward by ropes attached to the boats.  If only they had a power source to propel the vessels, maybe the expedition would not have taken two years to accomplish. 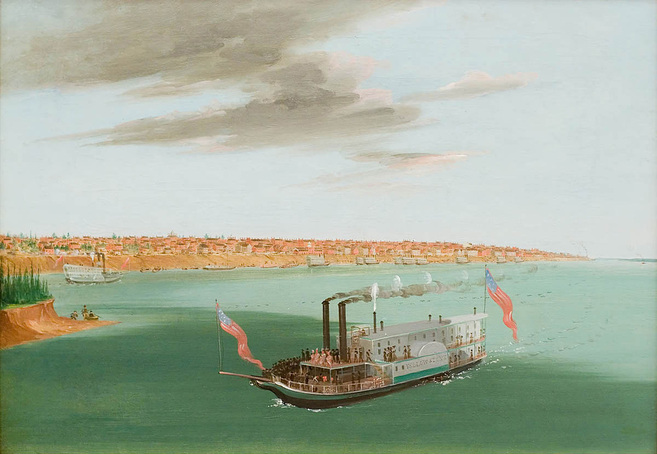 Whether it was known by these two great explorers we do not know, but such instruments had been toyed with for three-quarters of a decade before they made their trip.  Three years after Lewis and Clark left St. Charles for destinations westward, Robert Fulton would pilot his “Clermont” up the Hudson River, proving that steam power could successfully power a sailing vessel and reduce the time involved in river travel.  It would seem that Fulton’s ship was made for use on the Missouri and Mississippi Rivers.  The steamboat would stand as a victor over the “big muddy,” Fulton expressed in 1812 “the Mississippi is conquered” after one of his ships had navigated the longest river in the nation.  In no time, the steamboat and the Mississippi would be synonymous.  Daily passages would be common place from New Orleans to St. Louis and destinations farther north.

The steamboat Zebulon M. Pike opened the era of steamboat travel on the Mississippi in 1817.  Its fire-belching smokestacks scared the Native Americans watching the Pike dock at St. Louis.  They ran away from the scene and refused to return until the boat had left.  Their name for the steamboat was “thunder canoe” and thought only evil magic could make it travel upstream.  Two years later, the Independence would journey up the Missouri River, causing some to think that both rivers were no match to technology.  Maybe the fear expressed by the Native Americans seeing the Zebulon M. Pike first enter St. Louis fueled the attitudes of steamshippers toward these individuals.  That could explain why a special boat was built for an expedition up the Missouri in 1819 that had the shape of a snake’s head built into its bow, from which steam and flame poured out from its boilers.  The ship terrified Native Americans all the way to Council Bluffs, Iowa.

Travel today from Louisville, Kentucky to St. Louis is a journey made in an afternoon.  For the Pike to make that same journey, it took six weeks.  The ship traveled less than four miles an hour.  Still, it was a better, perhaps safer, mode of transportation for people of that era.  The ships served a double role, carrying passengers as well as cargo.  By 1850, close to 3,000 steamboats carrying shy of one million tons of freight docked annually at St. Louis.  Steamboats were the equivalence of today’s 18-wheelers.  .

While some might say that Mother Nature is no match for technology, she is good at proving people wrong.  The Missouri River was much more difficult to travel by steamboat than the Mississippi.  An old saying about the river was that it was “too thick to drink and too thin to plow.”  The channel was shallower and snags and sandbars often blocked the way.  Boats would run aground several times a day, making the trip from St. Louis to St. Joseph practically as long as the trip from St. Louis to New Orleans.  Ship manufacturers would begin designing boats specifically for the Missouri River traffic.
Using steam boilers was a dangerous thing.  There was always the risk for explosion or fire with the steam boilers.  Several ships blew up over the years.  In 1849, the steamboat White Cloud caught fire while it was docked at St. Louis.  By the end of the day, 23 boats and 12 city blocks of downtown had been lost to the fire.  In 1852, one of the worst tragedies was the explosion of the Saluda near Lexington, Missouri, killing more than 100 persons on board.

The average lifetime of a steamboat was five years.  More than 40 percent of the ships lost between 1811 and 1851 were due to hazards in the water, such as floating trees, ice, sandbars, etc. 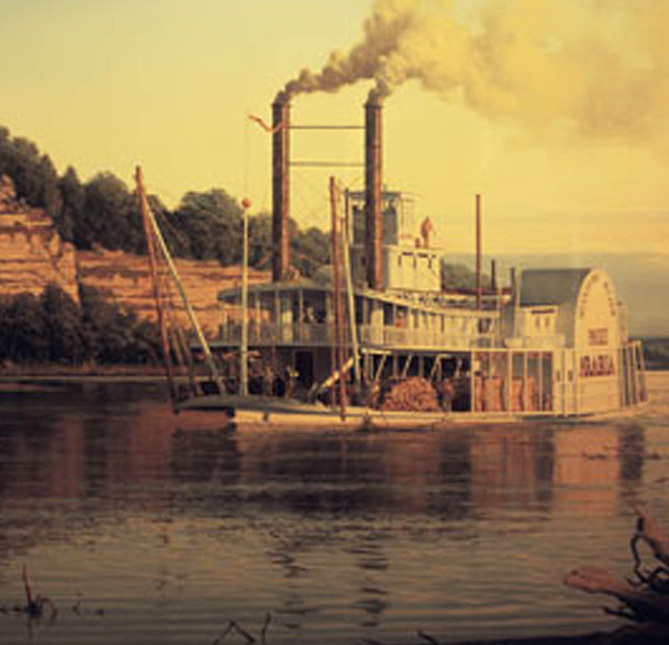 In 1856, the steamboat Arabia was making its way up the Missouri River.  Near Parkville, Missouri, the boat hit a fallen tree under the water and punched a huge hole in the boat’s hull.  Within a few minutes the Arabia was mostly under water.  All of the passengers were able to get to safety, but there was one fatality, a mule that was tied on deck drowned when the boat sunk.  The Arabia sank so quickly that the only visible evidence the next morning was the smokestacks and the pilot house.  Within a few days this was all gone as well. 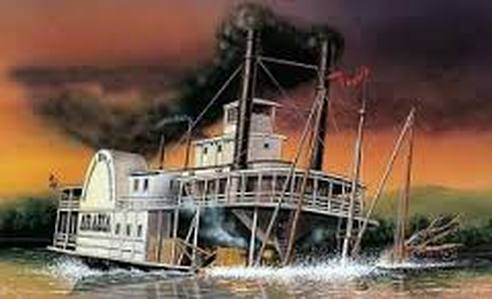 Parkville is located right by the Kansas/Missouri border.  The Arabia sank on the Missouri side of the river, but over the course of over one hundred years, the river has shifted and moved.  The actual location of where the steamboat sunk eventually became part of a farmer’s cornfield on the Kansas side of the border.  In 1987, the site was excavated and many artifacts were uncovered along with the wrecked ship and the tree that it hit. Close to 200 tons of goods and supplies have been retrieved from the Arabia’s resting place.  Food that had been packaged in glass bottles was retrieved from the wreck and the food is still edible.  All of these finds have been placed on display at the Steamboat Arabia Museum located in Kansas City, Missouri.
Steamboats were very helpful to the economy of Missouri.  The industry gave jobs, encouraged commerce, and opened new markets for goods and products from both the west and the east.  The fur trade, lumbering, mining, and agriculture all benefited from steamboating. Towns developed thanks to steamboats traveling through the area.  Trade and business activity grew, thanks to the steamboats, in Hannibal, Jefferson City, Glasgow, Lexington, and Westport Landing.  While they first operated only on the Missouri and Mississippi Rivers, in time, steamboat trade spread to the Osage, Gasconade, and White Rivers.  The arts and entertainment owe appreciation to the steamboat industry.  A host of folk tales rose up around the large double-deck paddlewheelers, such as Mark Twain’s Life on the Mississippi.  Twain, himself, had worked on the steamboats early in his life.  It is from that experience that he gains his pen name.  “Mark Twain” is a term used to describe the depth of the river at various points.

The escalating Civil War brought a halt to much of the steamboat traffic.  The industry would not be able to recover to its level of success prior to the war, especially with the advance of rail travel.  The 1930s did bring an increase in river traffic, thanks to the Army Corps of Engineers dredging, marking, and improving the river channels.  Diesel boats have taken much of the hauling responsibilities today of steamboats from the past.  Most of the use of steamboats today is recreational.  Still, the steamboat had a great contribution to making Missouri the state that it is today. 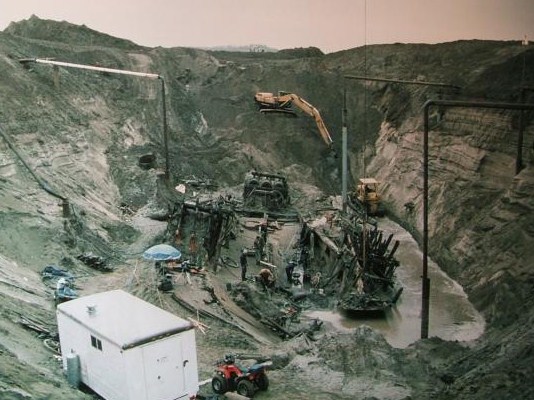