The President and the Vice PResident

Missouri’s own Harry S Truman entered the presidency in a tragedy.  President Franklin Delano Roosevelt had died and Truman was his Vice President, making Truman the new Commander in Chief.  As president, Truman would head the executive branch of the United States Government.  All presidents do the same.  The presidency is the top political job in the country.  Because of the power and global influence of the United States, the president is usually considered to have the most important job in the world.  Our first president, George Washington ushered in that concept.  Just as the nation has grown tremendously since that time, so has the office of the presidency.

The constitutional requirements for the presidency remain the same as they did when Washington was president.  The Constitution lists only three rules about who can become president of the United States.  A person must be at least 35 years old, a native-born American citizen, and a resident of the United States for at least 14 years.  By law, anyone who meets these qualifications can become president.  Still, someone who wants to be president must have more qualifications than those three.

Barack Obama is the first American president who was not a white male.  All but one have been Protestant Christians.  Unlike Mr. Truman, most have had a college education.  Many have been lawyers.  Most came from states with large populations.

Only in the past few decades has the presidency become a possibility for a wider group of Americans.  John F. Kennedy became the first Catholic president in 1960.  In 1984 the Democratic Party nominated Geraldine Ferraro as the first female vice-presidential candidate.  Sarah Palin held that honor for the Republican Party as the Vice Presidential candidate running with John McCain for the presidency.  In 1988, Jesse Jackson ran a close second in the race to become the Democratic candidate for president.  Jackson, an African American, continues to be active in politics.  Other recent African Americans with some substantial support toward being president have been Alan Keyes and Herman Cain.  In 2000 the Democrats nominated Connecticut senator Joseph Lieberman as the first Jewish candidate.  The 2012 presidential campaign held two Republican candidate favorites who were not traditional Protestant Christians, Rick Santorum, a Catholic, and Mitt Romney, a Latter Day Saint (Mormon).  Romney would win the Republican nomination and campaign healthily against the incumbent, Barack Obama.  In 2016, the Democratic nomination just might well be given to the first female presidential candidate for a main party, Hillary Clinton.

Presidential elections take place every four years in even years, such as 2000, 2004, 2008, and 2012.  The Constitution does not provide for direct popular election of the president.  It set up an indirect method of election called the Electoral College.  The Constitution says that each state “shall appoint” electors, who then vote for one of the major candidates.  Although the ballet will show the names of the presidential candidates, when you vote for a candidate, you are actually voting for a list of presidential electors pledged to that candidate.

To be elected president or vice president, a candidate must win at least 270 of the 538 electoral votes.    The winner-take-all system makes it difficult for a third party candidate or someone not from the two major parties, to win electoral votes.  There have been only a few instances in history where that has happened, such as the 1912 election when Theodore Roosevelt split from the Republican Party and ran again for the presidency as the Progressive Party, or “Bull Moose” Party candidate.

Although the winning presidential candidate is usually announced on the same evening as the popular election, the formal election by the Electoral College doesn’t take place until December, when the electors meet in each state capital to cast their ballots.  Congress counts the electoral votes and declares the winner as the next president.

Presidents serve four-year terms of office.  Originally the Constitution placed no limits on how many terms a president could serve.  George Washington served two terms, or eight years, then refused to run for a third term.  Presidents followed Washington’s example clear until 1940, when Franklin D. Roosevelt ran for a third term and won.  In 1944 Roosevelt would win a fourth term.  The Twenty-second Amendment, ratified in 1951, limits each president to two elected terms in office, or a maximum of 10 years if the presidency began during another president’s term.

Recent presidents have received a yearly salary of $400,000.00, plus money for expenses and travel.  The president lives and works in the White House, which contains a domestic staff of over 80 people taking care of the president’s family.  There are many benefits found in the White House for a president, such as a private movie theater, a small gym, bowling alley, and heated pool.

In addition, the president has the use of Camp David, a beautiful estate in the Catoctin Mountains of Maryland, about 60 miles north of Washington, D.C.  Camp David serves as a retreat and as a place to host foreign leaders.  When presidents need to travel, they command a fleet of special cars, helicopters, and airplanes.  For long trips, the president has Air Force One, a specially equipped jet.

Vice Presidents are usually not very visible to the public.  Their activities rarely receive front-page coverage.  Yet, if the president dies, is removed from office, or becomes seriously ill, or resigns, the vice president becomes president.  Truman and eight other vice presidents have become president due to the death or resignation of a president.  John Adams summed up the status of being vice president, a job he rather loathed, “I am Vice President. In this I am nothing, but I may become everything.” 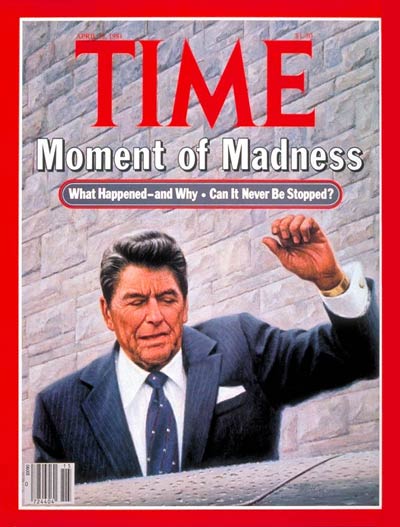 President Reagan was struck by the bullets of an attempted assassin.  If Reagan would have died, the Vice President would have become President.
Presidential Succession

In 1841 Vice President John Tyler settled the question when William Henry Harrison became the first president to die in office.  Tyler declared himself president, took the oath of office, moved into the White House, and served out the remainder of Harrison’s term.

In 1947, Congress passed the Presidential Succession Act, which indicates the line of succession after the vice president.  According to this law, if both the president and vice president die or leave office, the Speaker of the House becomes president.  Next in line is the president pro tempore of the Senate, then the Secretary of State and other members of the cabinet.

The Twenty-fifth Amendment has been used only three times.  In 1973 Vice President Spiro T. Agnew resigned, and President Nixon replaced him with Gerald Ford, a Michigan representative.  When Nixon resigned from the presidency in 1974, Ford became the new president and chose Nelson A. Rockefeller to be his vice president.  In 1985 President Ronald Reagan informed Congress that he would need to undergo surgery and be unable to carry out his presidential duties.  As a result, Vice President George H.W. Bush served as acting president for about eight hours. 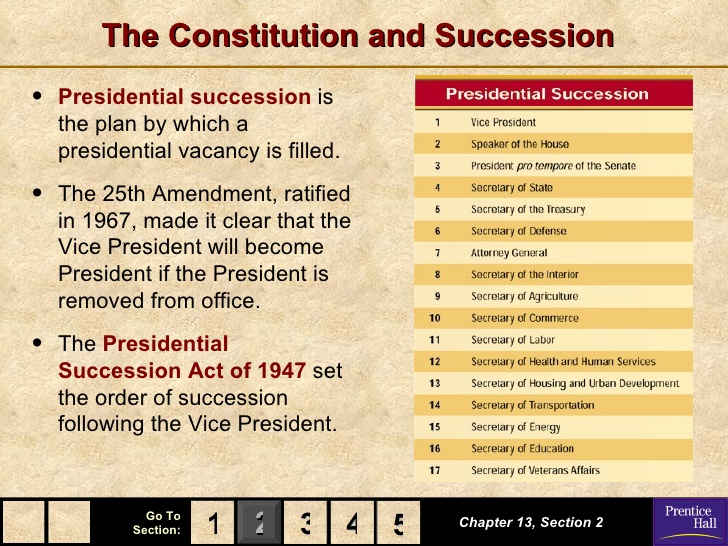