Unit One: Chapter One Section Three
"The Diversity of Americans"

A Nation of Immigrants

We have all heard the statement that the United States is a “melting pot” of immigrants from many different locations.  But are we more of a “salad bowl?”  We are joined together as a united group of people with some shared values and experiences, yet there are differences in all of us.  There are over 292 million people in the United States as you read this page.  Everyone of those people have ancestors that immigrated to this land at some point.  Even the earliest inhabitants migrated to this continent from other locations. 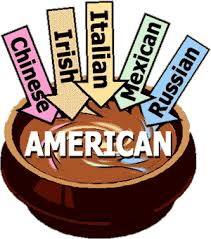 The United States was created by settlers from Europe.  Spanish immigrants in the 1500s were the first Europeans to establish a permanent settlement in North America. French and English settlers began arriving in the 1600s.  Germany, Ireland, Scotland, Sweden, and the Netherlands were all home to immigrants that would arrive through the 1700s.  Two additional influxes of immigrants from Europe occurred in the mid-1800s and from 1890-1924.  Immigrants from other locations, primarily Asia, were restricted or refused entrance into the United States at these times.   The majority of immigrants in the last fifty years have been from Asian countries and Latin America.

As European immigrants began to settle this continent, they began looking for ways to make their work easier and increase their income.  They started to enslave some Native Americans and locals to do the work that they didn’t want to do.  It was quickly discovered that this wasn’t working and the Europeans began looking elsewhere for workers.  Africa quickly replaced the Americas as the source of slaves.  These individuals were taken from their homes by force.  They were shipped several thousand miles away from their homes.  Between 1619 and 1808, a half million Africans arrived in this country as slaves. 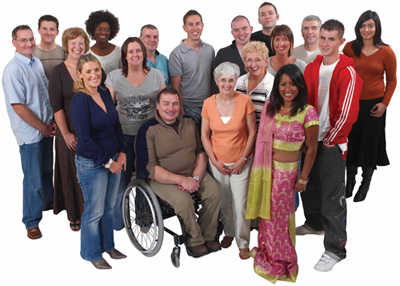 There is much spoken about being Irish-American, German-American, Japanese-American, African-American, and so forth.  Do you consider yourself as American or some combination of that and another heritage?  Many Americans don’t attach themselves with one single ethnic group.  Our ethnic diversity coincides with our religious diversity.  While there are over 158 million Americans claiming some form of Christianity as their religious belief, there are many others beliefs represented in this country.  Jews, Muslims, Buddhist, and many other religious groups worship freely in the United States.  Even those that don’t practice any religion are accepted in this country of diversity.  Much “old country” traditions have found their way into a blended American cultural experience for thousands of people.

A Growing and Changing Population

When the founding fathers signed the Declaration of Independence in 1776, the average life expectancy at birth for a citizen of this country was 35 years.  In 1900, that life expectancy had grown to 47 years.  In 2011, that life expectancy rate had increased to a whopping 78.7 years.  Technology, changing lifestyles, and medical advances have all contributed to the fact that Americans are living longer  The entire population of the United States grew from 12 million in 1830 to around 120 million in 1930.  Less than 40 million of those 1930 Americans were immigrants.  In 2030, the estimated population for the United States could be more than 358 million.  We are growing as a nation, but not all of that growth comes from immigration.

Since the American Civil War, the migration, or mass movement, of African Americans and others from the rural farming areas to metropolitan areas has been significant.  We have seen changes in the types of jobs people engage in, from agrarian and farming work to factories and one to service industries.  The physical demands on employees today is much different than those demands on workers in 1900.  We have seen large groups of older Americans relocating into the South and the West to find a much easier and more relaxed retirement period of life.

We are also seeing a change in what group of people are in the majority.  While white Americans of European backgrounds had been the majority for the first two hundred years of our country’s existence, the projected majority group of the near future will be Hispanic Americans.

Americans have had a common civic and political heritage founded on the historical documents, such as the Declaration of Independence, the Constitution, Bill of Rights, and others.  “Life, liberty, and the pursuit of happiness” rest at the base of these documents and our common connection.  We believe in popular sovereignty, the government must exist by the consent of the governed.  We believe in equal justice under the law, or all men are created equal.  We also believe in majority rule through the representatives in government.

Our country has one official language, English.  English is a common language used as a primary means of communication in all venues of life, including education, government, and business.  While the Internet is international and you find people bridging international barriers through shared memberships, many online forums or chatting locations, such as Facebook, have an official or underlying preference of using English on the site.  Several countries require the learning of English as a second language in school.  This common language strengthens our country’s position at home and abroad.

Remember the Japanese Americans during the early days of the United States involvement in World War Two?  Most were loyal to this country as it being their home.  That patriotism, love for one’s country is demonstrated through military volunteerism, flying the flag proudly, singing the national anthem, or reciting the Pledge of Allegiance.    Americans follow the nation’s laws and engage in civic life.  When the hijackers used jet airliners in acts of terrorism, or the use of violence by groups against civilians for a political goal, in 2001, Americans responded in unity and courage.  We volunteered, donated, repaired the damage and reaffirmed our commitment to freedom.