The Birth of a Democratic Nation

This lesson discusses the course of events that led to the First and Second Continental Congresses.  Examine the following content and follow the directions necessary to accomplish the tasks.

Go to the website using the link below.  Read the enclosed information to learn about the Boston Tea Party.  Afterward, go to the blog page for this section and answer the questions provided.
Boston Tea Party 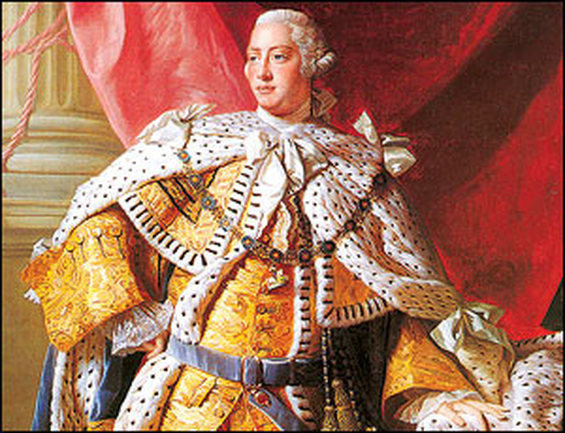 King George III, the monarch of Great Britain during the American Revolution
The people living in the English colonies of America were upset with Great Britain and wanted more rights.  They had experienced a great deal of governing their own situations since they were more than 3,000 miles from the established government.  They took on more power and responsibility.  They were often successful at making the decisions necessary in the needs of their own colony.  They began to enjoy that control they experienced.  When the British government began to retake that control, through legal processes and more, the colonists took offense.

Much of the control possessed by a mother country relates to money.  It could mean the expenses demanded due to the costs of maintaining a colony thousands of miles away.  Having possessions so far away from home prove quite costly.  Great Britain was concerned about the need of revenue from the colonies to offset any costs caused by the colony.  They sought ways to make money from the colonies, a form of mercantilism. Mercantilism is the theory that a country should sell more goods to other countries than it buys from other countries.  The best way for this work for Great Britain was for the colonies to be raw material sources.  Parliament made the colonies sell raw materials, such as cotton and lumber, to Great Britain at low prices.  The colonies couldn’t make any money because they were forced to buy British finished products at a high price.

Things escalated because of the French and Indian War. Great Britain fought against France for territory in North America. The war was costly to Great Britain and they sought out ways to pay these war debts through additional taxes on the residents of the colonies. The Stamp Act was passed in 1765, putting a high tax on newspapers, legal documents, and other printed products.  The American colonists had no voice in Parliament in the decision to tax ad they were resentful.  They cried “No taxation without representation” to anyone to hear. They chose to stop using British-manufactured ‘community This boycott, or refusal to pay of British goods, caused some colonists to drink coffee instead of British tea and make their own homespun wool instead of buying British made products. The boycott worked and Parliament repealed or canceled the Stamp Act and other taxes. 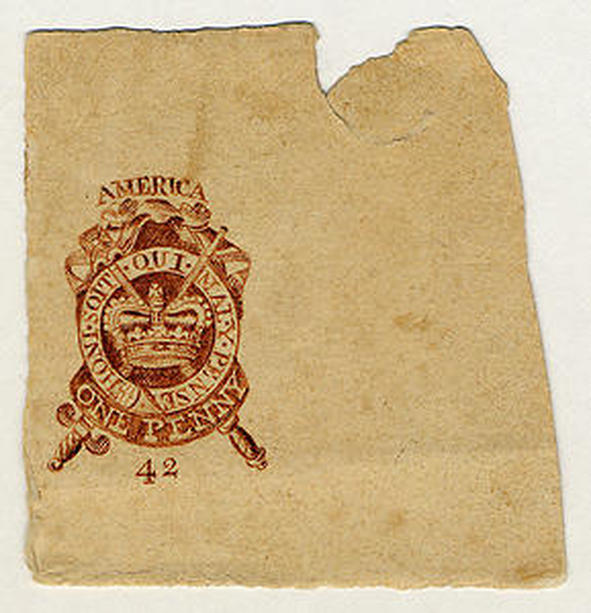 A common example of the stamp used during the Stamp Act of 1765. 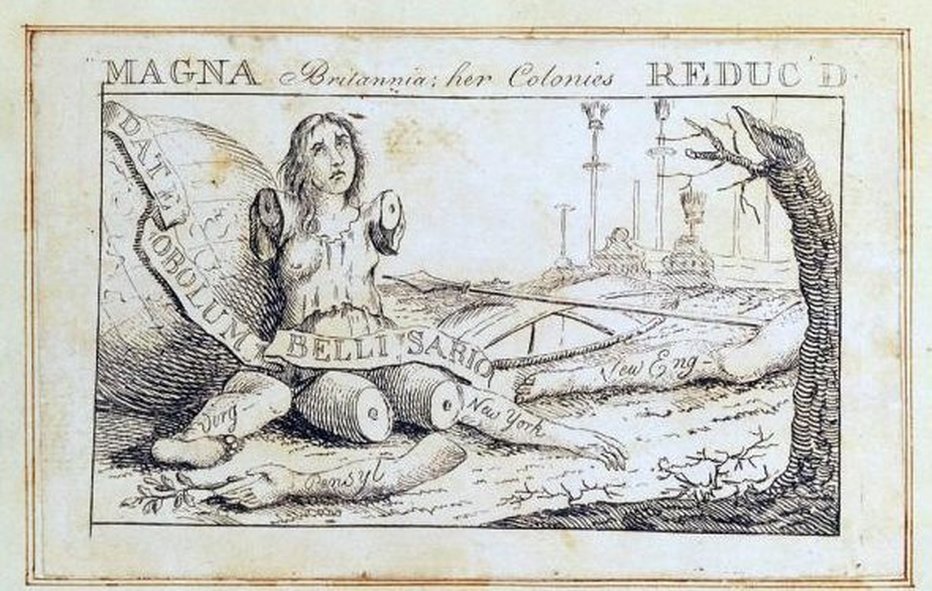 During the protest of the Stamp Act, Benjamin Franklin published the above "cartoon." What is this image trying to say?
Just because Parliament repealed the Stamp Act didn’t mean that things were “normal” yet. New laws were passed to replace the Stamp Act. The Declaratory Act of 1766 gave Parliament the right to tax and make decisions for the American colonies.  Remember that slogan “no taxations without representation?”  Parliament also passed the Townshend Acts, levying taxes on basic imports, such as glass, tea, paper, and lead. These were all common products used by all colonists.  Once again, the colonists began to boycott taxed products.

In 1773, Parliament passed the Tea Act, giving the right to ship tea to the colonies to the British East India Company without paying the majority of taxes. The company could bypass colonial merchants and sell right to the shopkeepers. It gave the East India Company a somewhat monopoly for the tea  industry.

Colonists saw this as an attempt to crush their freedom.  They blocked the East India Company ships from entering colonial ports other than the port of Boston. With this being the only location to allow the ships entry, it gave the colonists the opportunity to dress as Native Americans and sneak onto British ships in the harbor in 1773.  These colonists, associated with the Sons of Liberty and led by John Adams, dumped case after case of tea into the harbor and found other was to destroy the shipments.  This protest became known as the Boston Tea Party.

Parliament retaliated by passing the Coercive Acts, restricting the colonists’ rights, such as the right to trial by jury, and allowing British soldiers to search and move into colonists’ homes.  The colonists referred to these laws as the Intolerable Acts.  They saw these actions as cruel and intolerable and began to pursue freedom from Great Britain fully.

Colonial governments joined together in response to the Intolerable Acts.  A group of delegates, or representatives, met together in September 1774 at Philadelphia to discuss their concerns.  Every colony except Georgia was represented at these meetings.  Those present began to establish a political body to represent the American interests and challenge British control.

The meetings of September 1774 became known as the First Continental Congress. For seven weeks they met together considering ways to fix the problems they were having with Great Britain.  They sent documentation to King George III demanding their rights restored.  They contemplated further boycott of British goods.  They would vow to meet again if nothing changed.

Things did change, but not in the way the delegates hoped.  King George responded by ordering the use of force. British and colonial forces met at Lexington and Concord in Massachusetts in April 1775. Shots were exchanged and came to be known as the opening of the American Revolutionary War. Colonists now were aware that separation from Great Britain was inevitable.  Many colonists started pushing for independence, or self-reliance and freedom from outside control.  With the American Revolution now under way, the colonists began seeking independence from Great Britain in earnest. 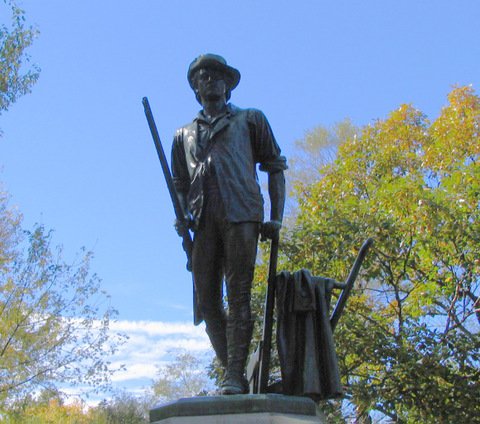 Image of statue signifying the colonial stand against British troops at Lexington and Concord.

Delegates met again in May 1775 to prepare for that independence.  It was not a unanimous goal of colonists, to seek independence from Great Britain. Some saw the fight as a lost cause because of the small number of colonial troops compared to the British military.  Others still were loyal to Great Britain.  It took months for the delegation to reach conclusion.

In January 1776, a colonist by the name of Thomas Paine inspired many with the publishing of a pamphlet titled Common Sense. Paine called for complete independence, arguing that it was simply “common sense” to stop following the “royal brute,” King George III.  Paine saw the colonial actions as a struggle for freedom.  More than half of the delegates in Philadelphia in this Second Continental Congress agreed with Paine that freedom from Great Britain was necessary. 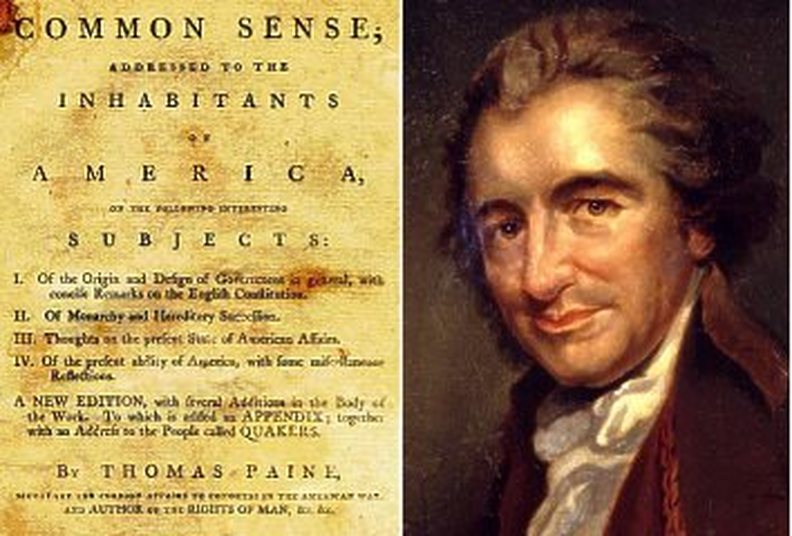 The Declaration of Independence

The Second Continental Congress began acting as a government for the colonies and set up a committee to construct a document to officially announce their separation, or independence from Great Britain and the establishment of the United States.  Most of the work was done by Thomas Jefferson.  Heavily influenced by John Locke and other Enlightenment voices, Jefferson’s draft of the Declaration of Independence explained why the United States of America should be a free nation.

The Declaration expressed that the British government did not look after the interests of the colonists. It listed a long compilation of abuses by King George III and called him a “tyrant unfit to be the Ruler of a free people.”  It also held the beliefs of the colonists about the rights of individuals. 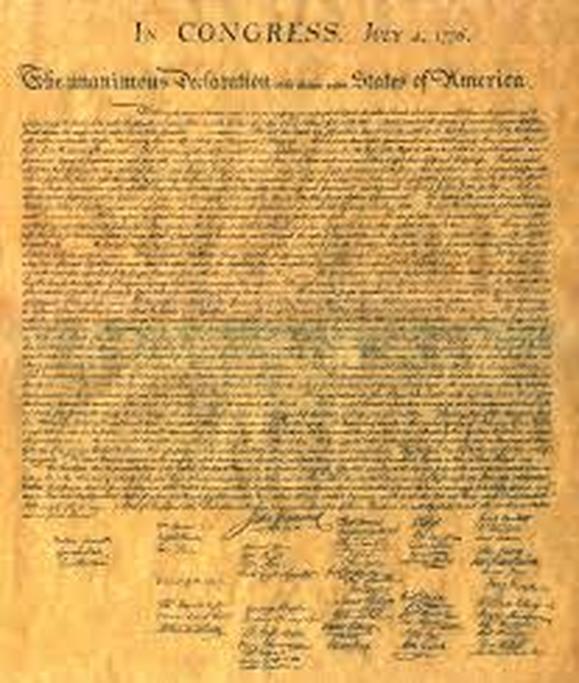 These ideas came from the works of John Locke, a seventeenth-century English philosopher of the Enlightenment era.  Locke’s Second Treatise of Government claimed that good government is based on social contract between the people and the rulers. The people agree to let go of some freedom and accept the decisions of the government if the government promises to protect their lives, property and liberty.  If the government fails to do so, the people should rebel.  Locke stated that all people should equally enjoy the rights to life, liberty, and property.  What do you think that statement really means to you?

The Second Continental Congress approved the Declaration of Independence almost as it was drafted.  They signed their acceptance on July 4, 1776, a date now referred to as “Independence Day” in the United States.  In some ways the American colonies were now an independent nation.  But the true freedom would not come until after war was waged with Great Britain and that nation’s recognition of the United States as fully independent nation.