When the Louisiana Territory entered the hands of the Americans and the American flag was hoisted up a flagpole at St. Louis, the residents wondered what would happen now.  The Territory of Indiana would be responsible for the land that is Missouri as of October 1804 with a capital located at Vincennes.  Vincennes was several hundreds of miles away from the new land and this upset those living in the area. 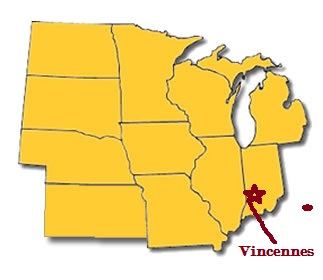 And what about slavery?  Many of the residents came to Missouri from slave states in the South and brought their slaves with them.  Now that the Territory of Indiana was in charge of the area, and Indiana was north of the Mason-Dixon line, who could say whether they’d be able to keep their slaves.  Congress tried to alleviate their fears by splitting the territory in two with the north being known as the Territory of Missouri in 1812.
Territorial Governors

The increase of American settlers in Missouri brought continued strife between the whites and Native Americans.  Governor Lewis tried to develop amiable relationships with the tribes of the area.  One of his efforts was the creation of Fort Osage and Fort Madison.

William Clark served as the superintendent of Indian Affairs.  He held a positive relationship with most of the Native Americans in the Missouri Territory.  Together with Governor Meriwether Lewis, the two saw a need to establish military and trade centers in the region.  The Osage Indians wished for the Americans to create a trading post in the southwestern area that they lived.  Clark would select a site overlooking the Missouri River in what is now Jackson County in 1808.  The Osage agreed to give up some 200 square miles between the Missouri and Arkansas rivers if the government maintained a permanent trading post and provided the tribe an annual grant of $1,500. 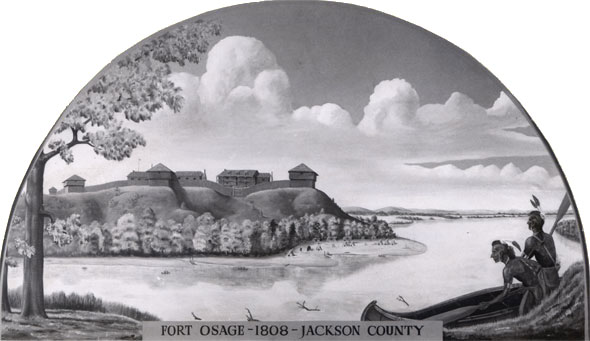 Fort Osage was situated high on a bluff overlooking the river.  It served as a key outpost until 1822, meeting the needs of both Native Americans and white settlers.  George Sibley would operate the trading post at the fort and the town would end up named for Sibley.  There is a log fort that is a reconstruction of the original facilities, which were abandoned and destroyed. 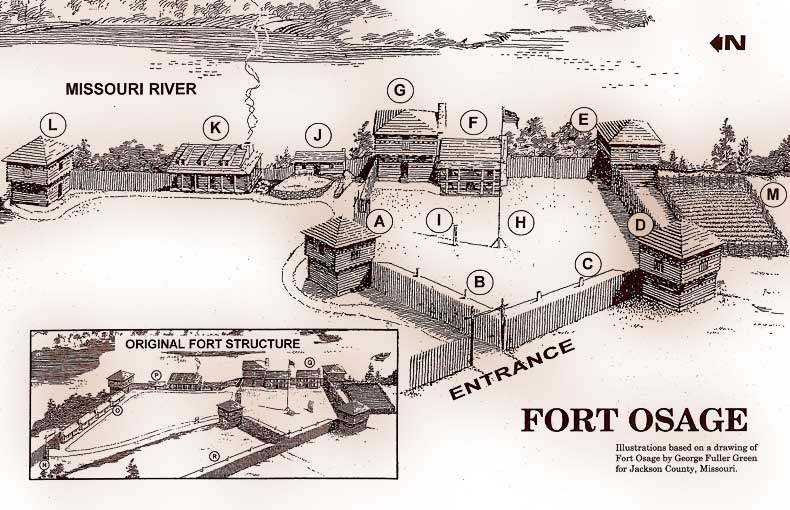 In late 1808, Lewis and Clark tried to establish another fort on the Mississippi near the mouth of the Des Moines River.  This was to strengthen territorial defenses against hostile Shawnee and Sauk.  Tecumseh, a Shawnee chief, had been busy stirring up the tribe to halt whites settling in the area.  Tecumseh had the backing of the Canadians, causing a deterioration of British-American relations.  Fort Madison took shape slowly and there was much conflict between the fort and the Sauk Indians of the region.  The current day town of Fort Madison is located around the site of the original fort.  It was named for the fourth President of the United States, James Madison and the site of the only battle of the War of 1812 west of the Mississippi.  Fort Madison was the first American fort on the Upper Mississippi River.

During the War of 1812, the Territory of Missouri was not immune to conflict.  There were many Native American attacks on the small settlements and settlers in the region.  The establishment of Fort Osage and Fort Madison were attempts to protect the settlers in the region.  The Sauk, Winnebago, and Meskwaki were allied with the British during the war and attacked Fort Madison.  Black Hawk led an attack on Fort Madison in 1813, the only battle of the war west of the Mississippi and one where the United States were defeated.  The months-long siege on the fort by Black Hawk’s Sauk warriors eventually brought a retreat by the surviving soldiers, using a trench to the river where they escaped by boat. 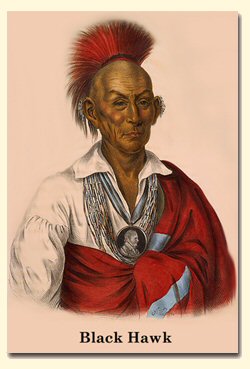 With the end of the War of 1812, a large influx of settlers arrived in the territory.  This forced more Native Americans to have to leave the area.  William Clark was now the territorial governor and orchestrated treaties with close to 30 tribes to give up land in Missouri for land in present-day Kansas and Oklahoma.  Clark was well respected by many of the Indians and he was very instrumental in maintaining peace in the territory through these agreements.

When the United States claimed possession of Louisiana, Missouri had a population of 10,000.  The majority of these people were in the St. Louis and New Madrid area.  Six years later, that population was up to 20,000 and grew to 67,000 in 1820.  That meant that there was enough population to request becoming a territory.  A lot of these new settlers came to Missouri from Tennessee, Kentucky, North Carolina, and Virginia.  The new settlers moved farther into the land, settling in the area of the Boonslick region of central Missouri.  This area gained its name because of Daniel Boon and his sons establishing a salt mining industry in Howard County.  There were many natural resources and fertile land in the area.  The Missouri River and its tributaries provided accessible transportation for the settlers and there were soon many towns across the region.  Howard County contained most of northwest Missouri at this time and the towns of Franklin, Chariton, and Boonville served the area well.

One of the largest natural disasters in the history of our nation occurred in the Missouri territory during the winter of 1811.  The New Madrid Seismic Zone is an earthquake faultline running basically along the Mississippi River southward from around Cairo, Illinois through New Madrid Missouri to Arkansas, affecting five central states.  In December 1811 through March 1812 there were several tremors and four significant quakes occurred to wreak havoc on the area.

The few settlers living near the village of New Madrid Missouri had went to bed on Sunday evening December 15, 1811 only to be awakened from their sleep by violent shaking of their homes during the early morning hours on Monday, December 16, 1811.  Some thought the end of the world was happening, others thought Indians had climbed on their houses and were trying to roust them out.  It was soon to be learned that the first significant earthquake on the yet to be named New Madrid Fault was occurring.  Another quake was felt about six hours later.  Small tremors and less intense quakes would continue until the next big one happened on January 23rd.  The final “big one” occurred on February 7, 1812.  Additional tremors and smaller quakes would go on for quite some time afterward; some claim that recent small quakes are still residual of these early 19th century quakes.

During the three months and three major quakes that befell the Mississippi Valley during this time caused the Mississippi River to raise and lower, even to run backwards for a period of time.  Small communities in the path of the damage, such as Little Prairie, Missouri and New Madrid, experienced major if not total devastation.  Some swampy areas were voided of their water and others were the site of trapped water making ponds and lakes.  Reelfoot Lake in northwest Tennessee came into being thanks to the change of the River.  Cracks opened up in the ground fourteen feet wide and the ground rolled in visible waves. 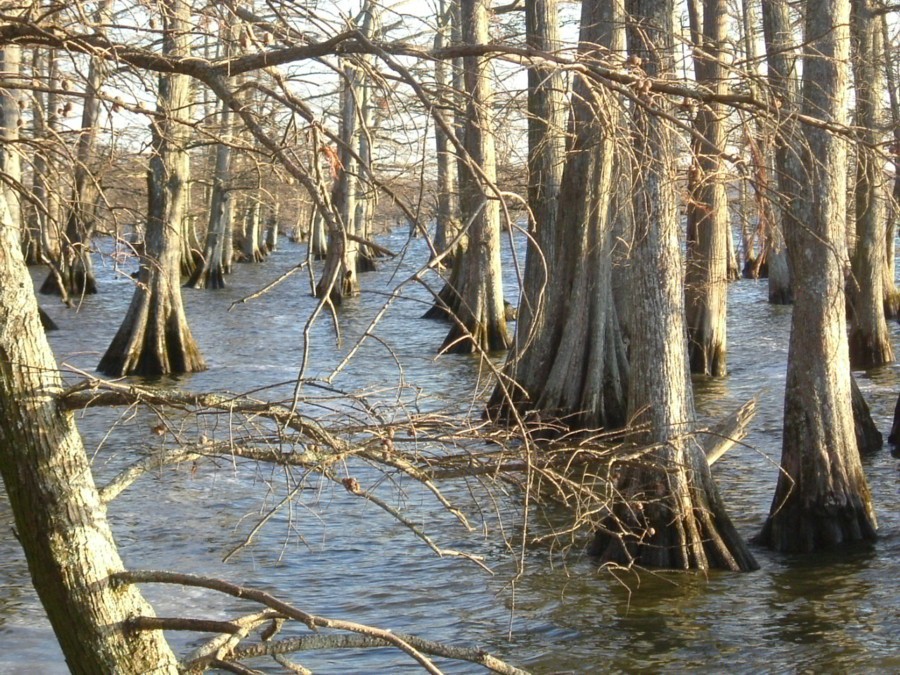 The quakes were felt for several states and even Canada.  Church bells rang in Charleston, South Carolina.  All of the east coast except for Maine felt them, including Washington D.C.  President James Madison experienced the tremors as far away as Washington.  Madison mentions waking to the shaking on February 7th in a letter to Thomas Jefferson.  Governor If the area was as populated as it is today, the devastation would have been catastrophic.  St. Louis, Memphis, and others would be decimated in piles of rubble.  Trade, transportation, and utility infrastructures would be ruined.  But in 1811, the area was very sparsely populated.  New Madrid only had close to 200 people living in its vicinity.

The quakes of 1811-1812 were not the only time that this faultline has caused destruction and it probably won’t be the last.  Several  scientists, historians, and intellectuals believe that another similar quake is overdue and could occur at anytime within the next fifty years.  If and when the New Madrid Fault decides to release its tension again is anyone’s guess.