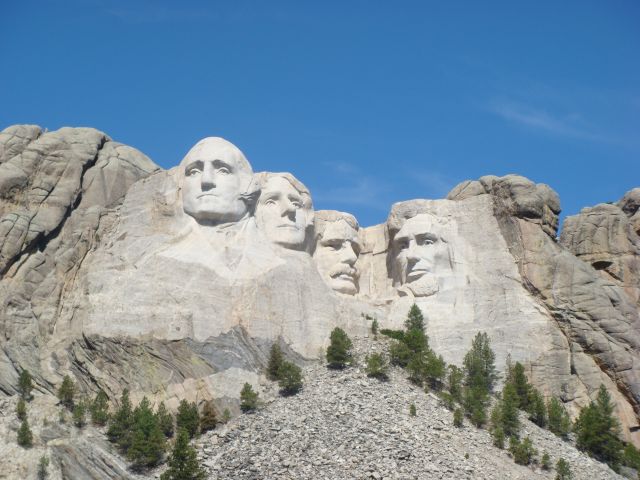 Gutzon Borglum spent many years in the sculpting of the four presidents on Mount Rushmore and it was not even finished when he died in 1941.  His son took over the task of completing the work.  The United States government provided much of the funds to construct this massive monument to our American history and culture, an image of the United States and our possession of all of the land now known as the continental United States.  Located in the Black Hills of South Dakota, Mount Rushmore is in the heart of Native American land. 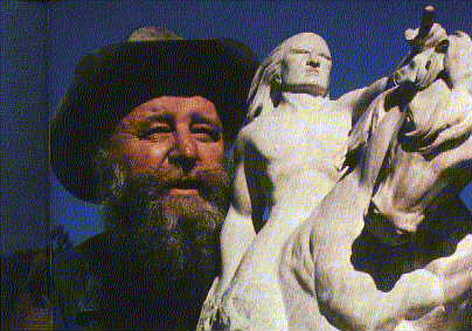 Located a short distance from Mount Rushmore is another monument of massive undertaking that is years away from completion.  Korczak Ziolkowski worked with Borglum on Mount Rushmore and felt that there should be some sort of monument recognizing Native American culture.  He chose to construct a sculpted memorial to the Native American chieftan Crazy Horse much in the same way that Borglum envisioned the completed Mount Rushmore sculpture.  But Ziolkowski had quite different ideas than Borglum.

The years of conflict and struggle Native Americans experienced with the United States government was not mute to this man.  Where many thousands and millions of federal dollars went into the construction of Mount Rushmore, Ziolkowski refused to take any money from the government, even though offered, to assist in his efforts.  He felt that would be a slap in the face to the Native Americans of South Dakota and throughout the nation.  The Crazy Horse Memorial has been funded completely by private donations, contributing to the lengthy time that has been part of its construction.  Not only did Ziolkowski refuse to accept federal monies, he also refused to be paid for his work on the monument.  Ziolkowski instead volunteered his time and efforts in the building of this tribute to Native American history.  When Ziolkowski died in 1982, his widow and family continued the work on the monument. 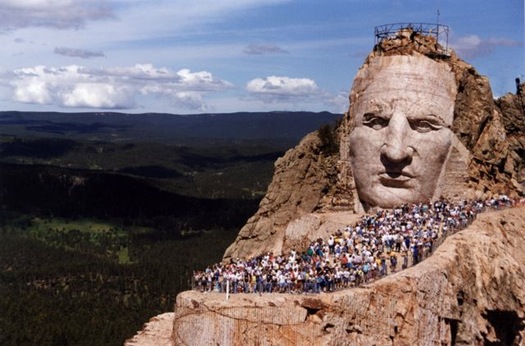 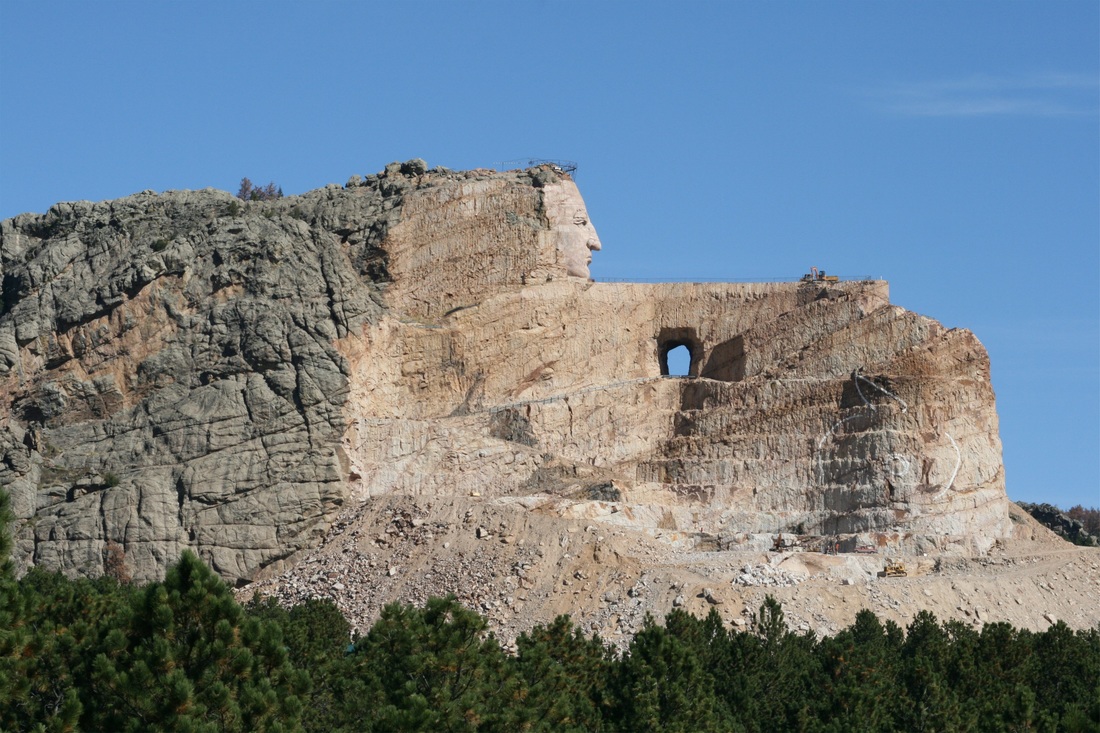 Volunteers filling sandbags in Clarkville, Missouri to protect property from flood waters during the 1993 flooding.
​The Crazy Horse Memorial as it appeared in 2015.
The Need for Citizens’ Involvement

Many would not, unless the project meant a great deal to them.  Ziolkowski was a volunteer, giving of his time, talent, and own money to the project of the Crazy Horse Memorial.  John Gatus is another example of a volunteer.  Gatus is a retired steamfitter who volunteers in an antigang neighborhood patrol.  He expressed “Volunteer work brings real change, change you can be a part of, change you can see with your own eyes.  You don’t need politicians or police to tell you things are better. You can see it and feel it for yourself and know you were a part of it…There’s a real pride involved. We’re part of a community.” 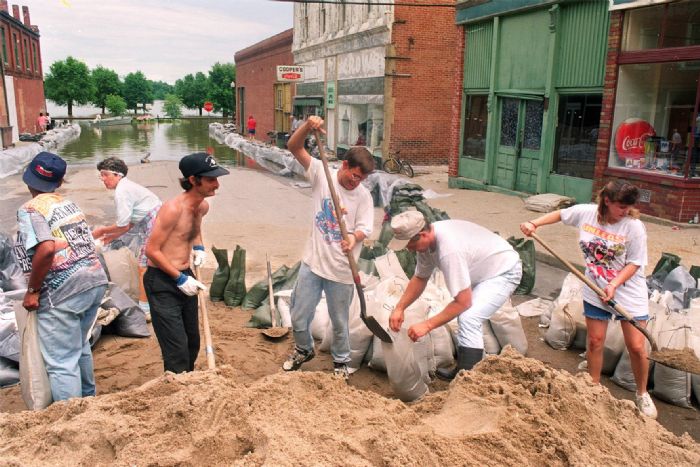 Volunteers filling sandbags to protect property in Clarksville, Missouri during the 1993 floods.
More than half of all Americans volunteer in some way every year to help their communities be better places to live.  (A community is a group of people who share the same interests and concerns.) These volunteers include more than 14 million middle and high school students.  It is the efforts of private citizens like these that has caused many vital social needs to be accomplished. 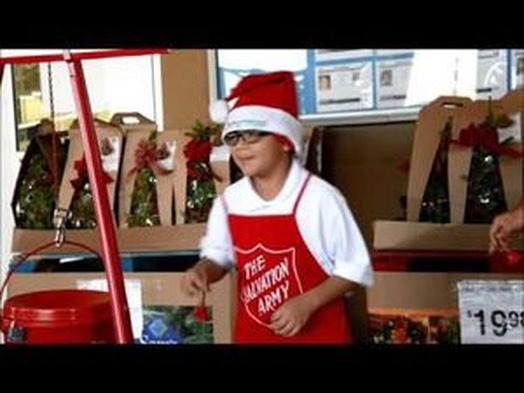 The United States government provides a wealth of services today.  We depend on it for local police protection as well as national defense.  Government provides for the collecting of household trash and ensuring clean water and air nationwide.  But citizens also share the responsibility of meeting community needs.
The government, after all, doesn’t have unlimited resources.  There is only so much money available for use by the government and they must hold to their budgets.  Governments are bureaucracies, or complex systems with many departments, many rules, and many people in the chain of command.  That causes the government to delay or not respond at all to every social problem.  In many cases, the best solutions come from private citizens.  Good citizens are concerned about the welfare (the health, prosperity, and happiness) of all members of the community.
JFK
“Ask not what your country can do for you; ask what you can do for your country.”   President John F. Kennedy made this challenge to the American citizens in 1961.  In 2001 President George W. Bush called for a renewed commitment to community service. He noted that we can show “the world the true values of America through the gathering momentum of a million acts of responsibility and decency and service.”
Donating Time and Money
There are many ways that people contribute to their communities.  Working independently or as part of volunteer groups both large and small.  Activities such as leading a Scout troop or serving with the Parent Teacher Association (PTA) are examples of ways that adults serve their community.  Retirees mentor schoolchildren, record books on discs or computers for the blind, and lead museum tours.  Young people volunteer at animal shelters, collect canned goods for a food pantry, or visit residents in nursing homes.  During the Thanksgiving and Christmas holiday season people participate in serving meals, donating toys, or preparing holiday baskets for needy families. 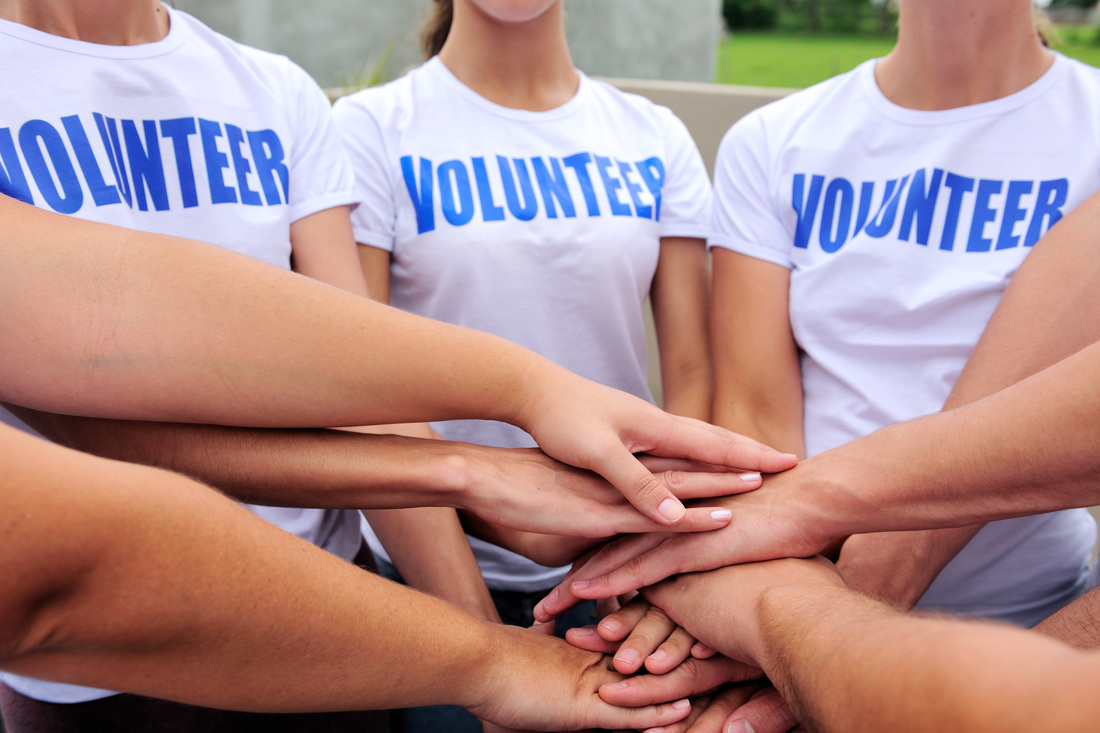 Contributing your time to work on community projects is the heart of volunteerism (the practice of offering your time and services to others without payment).  Americans may also support worthy causes by contributing money and resources.  More than $152 billion went to charities in 2000 from individual Americans.  Much of it came from small donations by average citizens.  The typical American donates about 2 percent of his or her income to charity.
Many companies believe in giving something back to the community.  Small businesses may sponsor a recreational sports team (maybe you have played on a Little League team that was sponsored by a local business) or donate prizes for a charity’s fundraiser.  Large companies often contribute thousands of dollars to community projects, like building a new public swimming pool or putting on a free concert.  The Kirksville Rotary clubs made the North Park Sports complex possible through their work and wealth.  When Bill Gates was the director of the Microsoft Corporation, he established in every job description that employees should contribute part of their income to charity.  Businesses often match the charitable donations of their employees, chipping in a dollar of corporate funds for every dollar that a worker gives to charity.
Many companies make a special commitment to investing in your people. They may offer college scholarships to students or give their employees time off to volunteer in the schools.
Volunteers in Action
Community involvement tends to be rooted in individual action and informal groups.  People are more likely to participate when they feel a personal connection to a cause or know others involved. Thus they join their Neighborhood Watch or become active in their child’s school. They reach out to the community through their religious congregations or service clubs like Rotary, Kiwanis, and the Lions Club.  Some people volunteer through more formal channels.
Charitable Organizations
More than one million charities are officially registered with the federal government. Many are small and locally based. They often work on one or two projects, such as helping victims of domestic violence or preserving historic landmarks.
Other organizations, such as the United Way, the Boys and Girls Clubs of America, and Big Brothers Big Sisters, are large national bodies with varied activities serving millions of people.
All of these groups depend on ordinary people who give their time freely.  Most, however, also have some paid staff who help set organizational goals, manage the budget, and oversee operations. 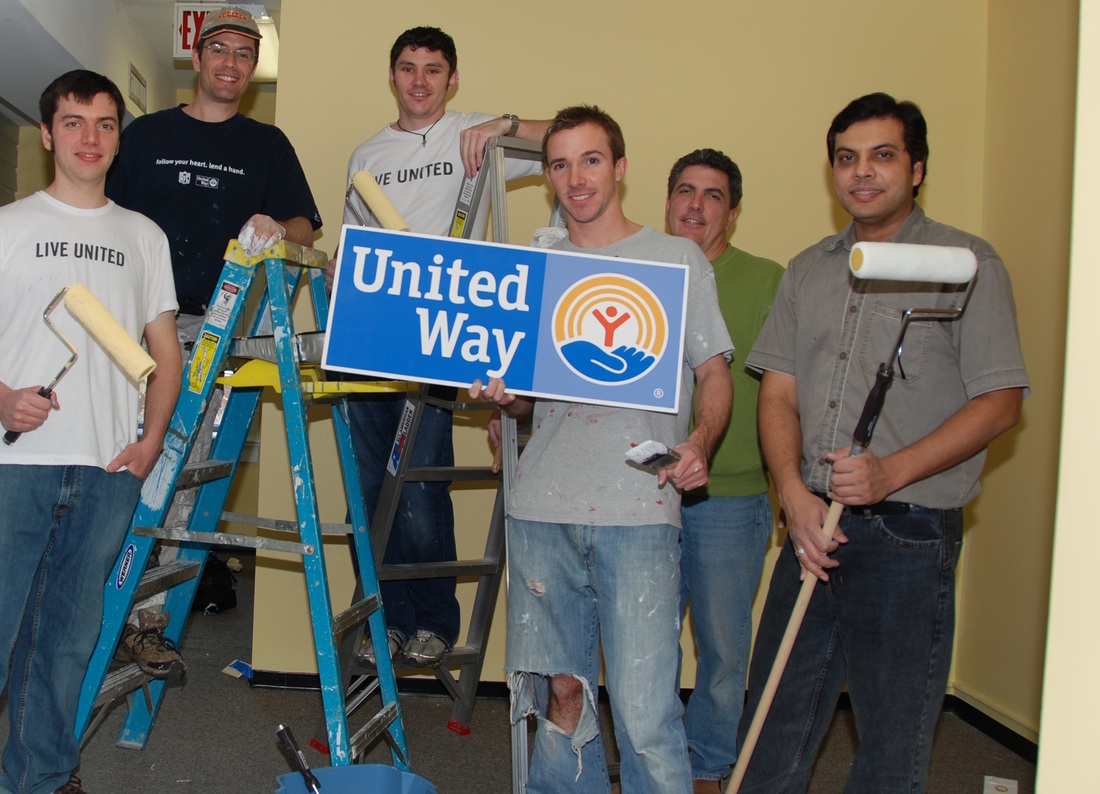 School-Based Programs
More than half of the schools in the United States now arrange community service for students in high school. Several hundred school districts even require it for graduation.
Some think that community service is less meaningful when it is expected.  According to one school official, “students think it’s a neat idea, and for many of them it is nothing new.” Many have already been active volunteers in the community.  Maybe you have already volunteered in some way. 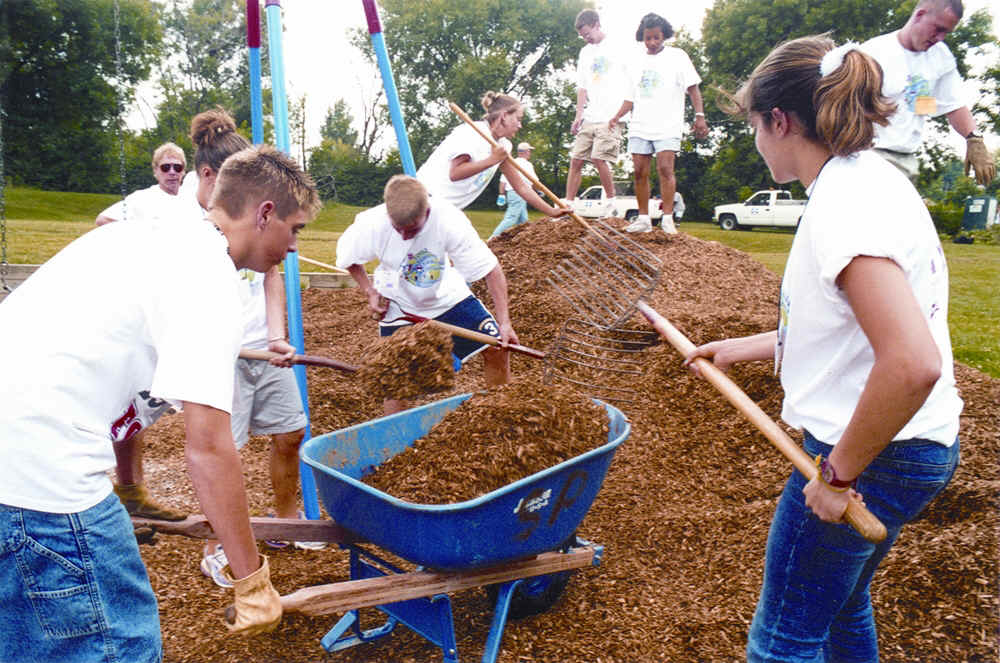 National Service Programs
Over the years, the federal government has created various national programs to encourage volunteerism. The Peace Corps was started in 1961 to help people in the poorest countries of the world.  The Peace Corps has sent tens of thousands of Americans to 135 countries to advise farmers, teach children, dig wells, help start small businesses, and help fight serious diseases.  In the United States the government provides community service opportunities through AmeriCorps and the Senior Corps.
More than 50,000 Americans participate each year in AmeriCorps.  Most work through local and national organizations to meet community needs. Under the guidance of the American Red Cross volunteers help victims of floods, fires, earthquakes, and other disasters.  Working with other groups, they might clean up polluted rivers, immunize children, or assist people with disabilities. In return for a year of full-time service, AmeriCorps volunteers receive an allowance to live on and money to help pay for college.
The Senior Corps provides volunteer opportunities to Americans aged 55 or older. These people take part in three main programs.  Foster Grandparents work one on one with children with special needs. Senior Companions help other seniors meet their daily needs while living in their own homes. The Retired and Senior Volunteer program (RSVP) links volunteers to service opportunities right in their backyards. For example, they might deliver hot meals with Meals on Wheels, help plant and tend a neighborhood garden, or teach English to immigrants.
The Benefits of Volunteering
The United States has always been a nation of volunteers. A French political writer, Alexis de Tocqueville, was amazed to see citizens pitching in to solve community problems when he visited the country in the 1830s.  He explained it as “self-interest rightly understood.” In other words, by banding together to serve the community, we also serve ourselves.
Volunteering can be rewarding beyond measure.  By volunteering we make our communities better places to live and gain new opportunities to learn, make friends, and improve our teamwork, leadership, and problem solving skills. It is satisfying to know that you can make a difference in someone’s life!
Chapter 5 Section 2 Review
Powered by