On July 17, 1990, Saddam Hussein, then leader of the Iraqis, accused Kuwait and United Arab Emirates of flooding the world oil market. Supposedly Kuwait was stealing oil from the supply, thus starting the “economic war” against Iraq. One month later, on August 2nd 1990, the Iraqis invaded Kuwait and occupied it. The Emir of Kuwait went to the then Secretary of Defense, Richard Cheney, requesting the military’s assistance. The military commanders and strategists got right to work, working on offensive plans.
The United Nations sent out a warning to Hussein, saying if he didn’t remove his troops by January 15, 1991, they were calling for military action. Of course, Iraq ignored the United Nation’s warning and soon enough, UN forces came into Iraq. Iraq was also invading a neighbor country of Saudi Arabia. That means, if Iraq managed to take control of Saudi Arabia, who was also part of the major oil supply, they would own one fifth of the entire thing. 500,000 American troops were then placed in Saudi Arabia just in case the Iraqis planned a surprise visit.
On January 12th, Congress allowed President Bush to wage war on Iraq. 36 members of the coalition forces went to Iraq under the leadership of American General H. Norman Schwarzkopf. He initiated an air attack which would disable Iraq’s communication devices, air defenses, and radar installations. The war started being called Desert Storm, which involved Air Force and Navy support. It included strategic aircraft sorties to destroy installations in Baghdad.
Iraq responded to that by launching Scud missiles at military barracks in Saudi Arabia and Israel.   Five weeks go by of air and missile combat and finally troops enter Kuwait. It was on February 27th that the coalition forces forced Iraq into a cease fire after 100 hours. All the objectives were complete, but Saddam Hussein was still ruling Iraq from Baghdad. President Bush was worried if Saddam was taken out, the country would then turn into a civil war.
But luckily, Iraq surrendered and the conflict was over with. But Iraq didn’t really leave without a fight, or stealing, or blowing up things. The Iraqi troops that occupied Kuwait plundered millions of dollars of valuables. And as the Iraqi retread, they also blew up Kuwait’s oil wells. Then they took the oil and poured it into the Persian Gulf.
It was costly and it also had casualties. There are estimates of how many Iraqi deaths there were hundreds of thousands of Iraqis died and only 148 American deaths. The Gulf War was a televised event. CNN was broadcasting it “live” around the clock about unfolding events. American viewers saw smart bombs with a camera being placed on them as they blew up Iraqi targets.
People knew what “SCUD” and “Patriot Missile” meant. “SCUD” is tactical missiles that the Soviet Union developed and used in the Cold War. They are exported to other countries. The “Patriot Missile” is a long range missile, which can go up at any altitude, any type of weather to counter tactical ballistic missiles, cruise missiles and advanced air crafts.  The stealth fighter was used for the first time in that war, which was the largest American military operation since Vietnam.It was completed with success. Americans were once again faithful in their military and technological side. President Bush stated that the “new world order had begun.”

Below are images of the "SCUD" Missile and the "Patriot" Missile 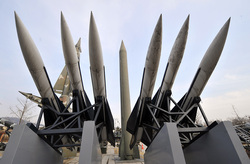